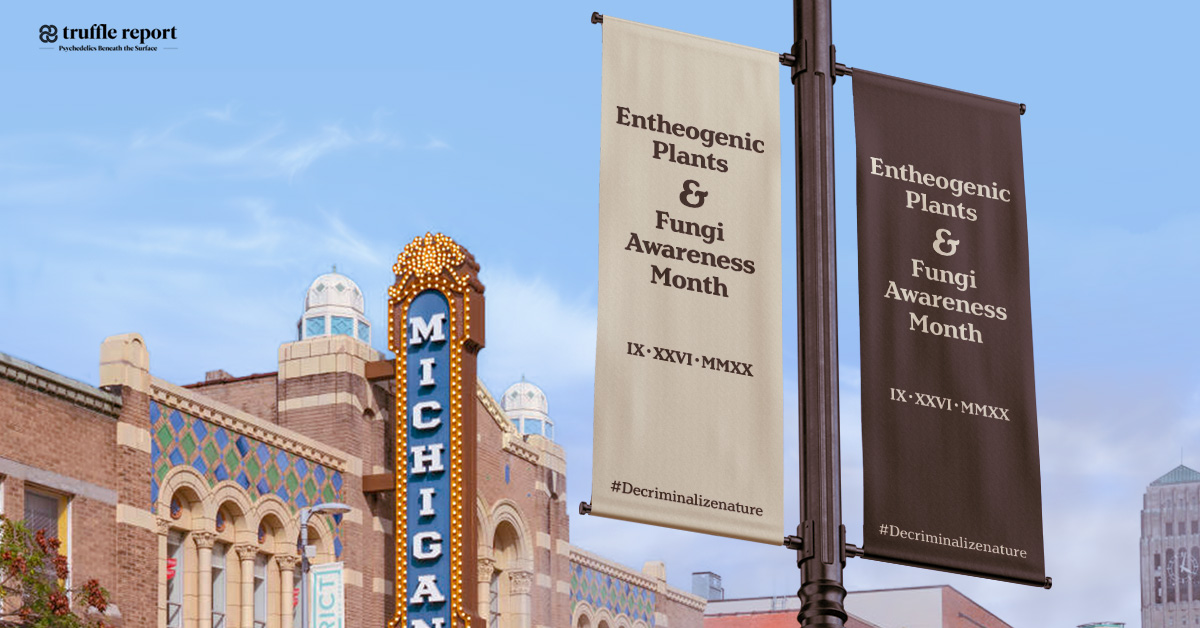 One year ago, Ann Arbor, Michigan made history by decriminalizing psychedelic plants and fungi. Now, while the city is gearing up to observe its first Entheogenic Plants and Fungi Awareness Month this September on the first anniversary of that decision, advocates are preparing to introduce statewide legislation to decriminalize psychedelics.

Myc Williams, co-director of Decriminalize Nature Ann Arbor (DNA2), shares that the new legislation would be the first such effort led by DN to receive traction at the state level. DN Michigan has been working on drug policy reform legislation to expand access to entheogenic plants and fungi ever since the campaign was first announced in March.

“It’s definitely happening,” Williams says. “I know not every state is going to have as easy of a battle as us. That’s not by any means to say that this is going to be easy. We will have a lot of opposition,” he predicts.

“We have some really strong partners like veterans associations, mental health associations, therapists, indigenous leaders, rural communities, and urban communities all joining together in Michigan,” Williams tells Truffle Report. “I think that’s the kind of unity you’re not seeing in other geographic locations within the movement,” he adds.

The language of the resolution itself is still being drafted. Williams shared that one of the unique components of this bill would be the provision for financial gains.

“What that looks like is, you still can’t grow and sell mushrooms or any other substance. What you can do is if you are a therapist, or a spiritual advisor, or a space holder who works with these substances, you can be reimbursed for your service,” Williams explains.

Michigan advocates had also filed a ballot with the State Ballot Committee, DN Michigan shared in its previous press release.

The City of Detroit will be voting via a ballot initiative this November on whether or not to make entheogens the lowest law enforcement priority in the city. This ballot is also being spearheaded by the grassroots organization Decriminalize Detroit.

Grand Rapids, another city in Michigan, will attempt a vote to decriminalize psychedelics in September.

September is a Month for Celebrating Entheogens in Ann Arbor

In a unanimous vote on August 16, the Ann Arbor City Council declared September the month for Entheogenic Plant and Fungi Awareness. The resolution, introduced by Councilmember Jeff Hayner, will work towards increasing “awareness and understanding potential benefits of entheogens for mental health, personal and spiritual growth, as well as honouring the long-standing ancestral practices and relationships with these entheogens.”

“This is a celebration of what we’ve done and what’s to come,” says Williams. “It’s a chance to honour the ancestors and the plants themselves. And a place to get education on these substances,” he adds. Similar to Pride month for the LGBTQ community, Williams says, they are hoping to see groups coming together to “celebrate freedom, liberty, and teachings of our ancestors.”

The organizers have laid down a series of events for September 19 to celebrate psychedelic awareness and commemorate one year of the decriminalization of entheogens. The festival will be held at the University of Michigan campus from 11:11 am until 2:22 pm. The event aligns with two major occasions for the psychedelic community, globally and in Ann Arbor. 9/20 and 9/21 mark International Magic Mushrooms Day, and the anniversary of the city’s decriminalization resolution, respectively.

One Year After Psychedelic Decriminalization

In the last year, there has been little negative feedback on the psychedelics initiative, Williams shares with Truffle Report. However, there have been instances of individuals reaching out to Decriminalize Nature Ann Arbor, or Michigan Psychedelic Society, asking where to buy psilocybin mushrooms.

To those kinds of queries, Williams responds: “We’re a political campaign. We don’t supply substances. Our Michigan Psychedelic Society does not provide substances. They provide education and community. We are a political organization trying to change policy.”

Such questions are generally redirected to the local mycology community so that users can learn to safely cultivate their own entheogens. The idea is not just limited to psilocybin mushrooms. Questions around peyote cacti — an increasingly scarce substance widely used by Native American Churches as a sacrament — are diverted to other, similar cacti options like San Pedro, while education is provided about the ancestral history of the endangered species.

“That’s the whole idea here,” Williams says. “The biggest thing missing is education. You learn from your dealer how to use [these substances] or learn from your friends, and where do they learn from? Their friends. These substances can all be used reasonably, responsibly, and safely if you understand dosage. The source of your supply can’t do that, as long as the drug war is still going on.”

In 2019, the Ann Arbor grassroots initiative first began with the goal of decriminalizing all drugs and ending the War on Drugs in the city, but was later narrowed down to naturally occurring psychedelic plants and fungi.

“There’s a big divide in the drug policy world right now,” Williams tells Truffle. “Those that are for decriminalizing all drugs call Decrim Nature psychedelic laws ‘psychedelic exceptionalism’, and I hear it loud and clear,” he says.

However, policy reform seems to be working for many, while providing access to naturally occurring psychedelic plants. Entheogens are proving helpful to many individuals in overcoming addiction and substance use, including Williams himself. He shares that as a person in recovery, he believes that psychedelic substances “provide a chance for healing beyond just addiction, mental health, and physical ailments.”

“The fact of the matter is we’re all on the same team. We need to stop drying sand and being divisive,” Williams stresses. “We need to unite, gather, appreciate each other, and work together. Even if we’re not working on the exact same thing, we’re all working in the same direction,” he adds.