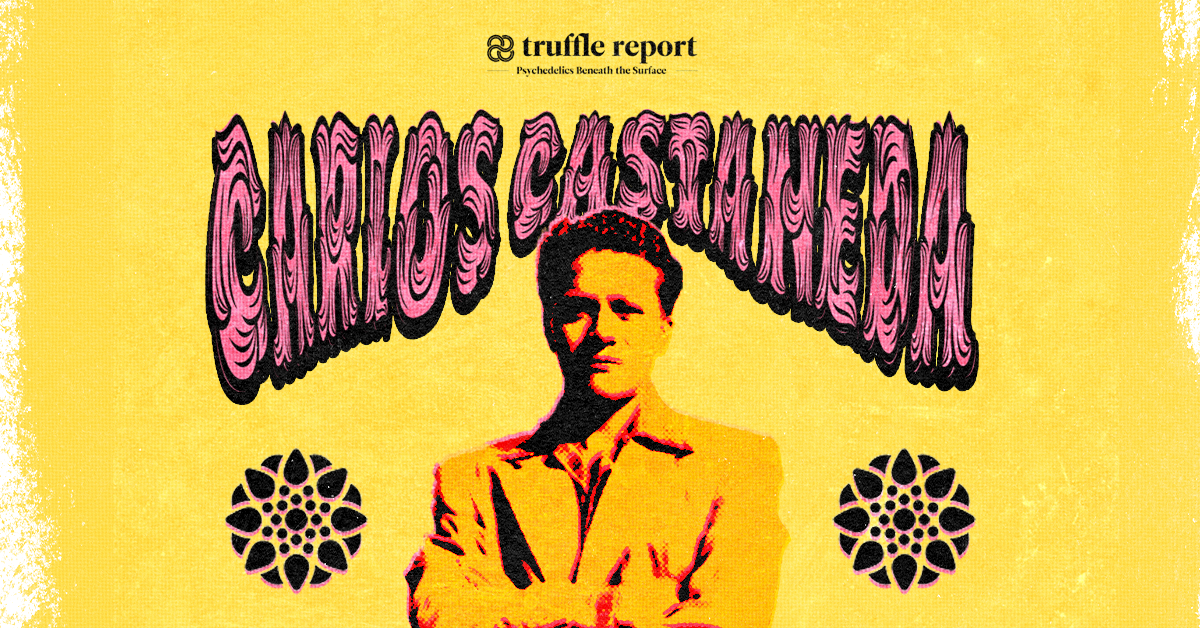 Carlos Castaneda and the Psychedelic Space that Was

When speaking of the great wave of psychedelic substances and influencers that seemed to wash over American culture in the 1960s, it’s easy to fall into certain traps of nostalgia and bias. In the case of Carlos Castaneda, the stereotypes and iconography that come to mind seem tailor-made, molding the skepticism and transcendentalism of the time alongside racist attitudes. Accompanying these is a sense of the mystical that seems to come not just from the substances themselves, but from the urge of the counterculture to embrace the very concept of foreignness as an escape from the reality of the United States in the mid 20th century. Those looking to define today’s psychedelic space must first face the daunting task of dissecting these attitudes in order to create a stable foundation in which the work can take place.

It’s easy in any reflection on this bygone era and the substances that helped fuel it to look back on Kesey or Leary, or even further perhaps to Aldous Huxley and The Doors of Perception. Carlos Castaneda author, anthropologist and educator, and self-professed sorcerer, is a name that belongs right beside the others in terms of public perception of psychedelics, but that is not frequently heard in the same breath. Rightfully controversial, Castaneda’s place in history defies easy categorization due both to the inherent prejudices in the reporting on him and his own apparent desire to feed the mystique that grew around him alongside his fame.

On one hand, his The Teachings of Don Juan: A Yaqui Way of Knowledge (1968) and its sequels capitalized on the moment in time as well as Huxley, Leary, or Kesey, selling millions of copies and beginning Cleargreen Incorporated and Tensegrity, a system of “Powerful, Practical Life Tools from the Shamans of Ancient Mexico.”

On the other, while psychedelic substances like peyote, Datura, and psilocybin had as undeniable a role to play in his work as mescaline did in Huxley’s or LSD in Leary’s, Castaneda presented his transformative journeys as fact rather than metaphor, and disdained the other names mentioned in this article along with their followers. Of an East Village party in 1964 he attended alongside Leary, he was dismissive, saying “They were children, indulging in incoherent revelations. A sorcerer takes hallucinogens for a different reason than heads do, and after he has gotten where he wants to go, he stops taking them.”

His source, the eponymous Don Juan Matus, has been frequently criticized as fictional or imaginary. Supposedly a Yaqui Indian Sorcerer from Sonoma with whom Castaneda apprenticed in 1960, Matus’ existence was never verified or conclusively disproven by any of the plethoras of journalists, critics, or vision seekers whose interest was piqued by Castaneda’s work. The author himself was famously reclusive, as well as vague with personal details, offering inconsistent accounts of his age, actual name, and birthplace, being either from Peru or Brazil originally.

In an interview with Time, published in March of 1973, he was evasive when confronted, stating “To ask me to verify my life by giving you my statistics is like using science to validate sorcery. It robs the world of its magic and makes milestones out of us all.” More recently, Spanish investigator and author Manuel Carballal has compared him to Charles Manson. Quoting Carballal in Al Dia, a publication devoted to “Documenting the best of US Latino Experience”, journalist Beatriz Garcia made reference to the suicides and unresolved deaths of several of Castaneda’s followers and associates.

While he was far from a cooperative subject for examination, that same Time article tellingly referred to Castaneda as “a loquacious, nut-brown anthropologist”, and “an enigma wrapped in mystery wrapped in a tortilla” as well as “The Godfather of the New Age”. It concluded by asking readers “Will Castaneda become the Dr. Faustus of Malibu Beach, attended by Mephistopheles in a sombrero?” Though far from the most sensational or prejudiced journalism of its time, the coverage of Castaneda and Don Juan offers a vivid example of demeaning racial bias and fetishism at play, along their lasting consequences in the psychedelic space.

This is not to say that the skepticism regarding these books was unjustified.

Whatever the level of literal truth in Castaneda’s work and its effect over the years, it is unlikely he originally sought out his role as the literary shaman/professor of Los Angeles. Don Juan was first published as a master’s thesis under the then-conservative University of California Press, with no realistic expectation of fame or fortune as a result. What came next was a testament to the times and the power of Castaneda’s writing, true or otherwise.

The work and its sequels A Separate Reality: Further Conversations with Don Juan (1971), and Journey to Ixtlan: The Lessons of Don Juan (1973), along with a dozen other of Castaneda’s books, were picked up by Simon and Schuster, and have sold millions of copies to date. Despite being a different sort of advocate for altered consciousness than his hippie contemporaries, the 20th-century perception of psychedelics like peyote, datura, and psilocybin owes much to the man, the moment, and the enduring power of their combined mystery in the collective psyche of western culture.

After decades of only sporadic appearances following his Time interview, Carlos Castaneda died of cancer in 1998. His legacy is complex, his believers and detractors remain numerous, and Tensegrity gives every impression that it is still going strong, with live experiences taking place around the world. What’s left for those of us who seek to work in an emerging psychedelic industry are lessons and questions. Significant reasonable doubt remains as to whether or not Castaneda ever actually interviewed Don Juan or anyone like him, or simply produced an opportunistic work of fiction as a master’s thesis that took him and his readers further than he would ever have imagined. It’s tempting to call that sorcery in itself.

The problem with sorcery is that it’s by nature unaccountable, unverified and unverifiable. How do we treat the use of these substances by indigenous cultures throughout the world, learning about them and teaching others with respect and care as our own research moves forward? The work in front of the psychedelic space now is not mystical, but clinical, therapeutic, and commercial. Nostalgia and bias are easy. What comes next, if done right and with transparency, will be harder, but also that much more worthwhile for it.