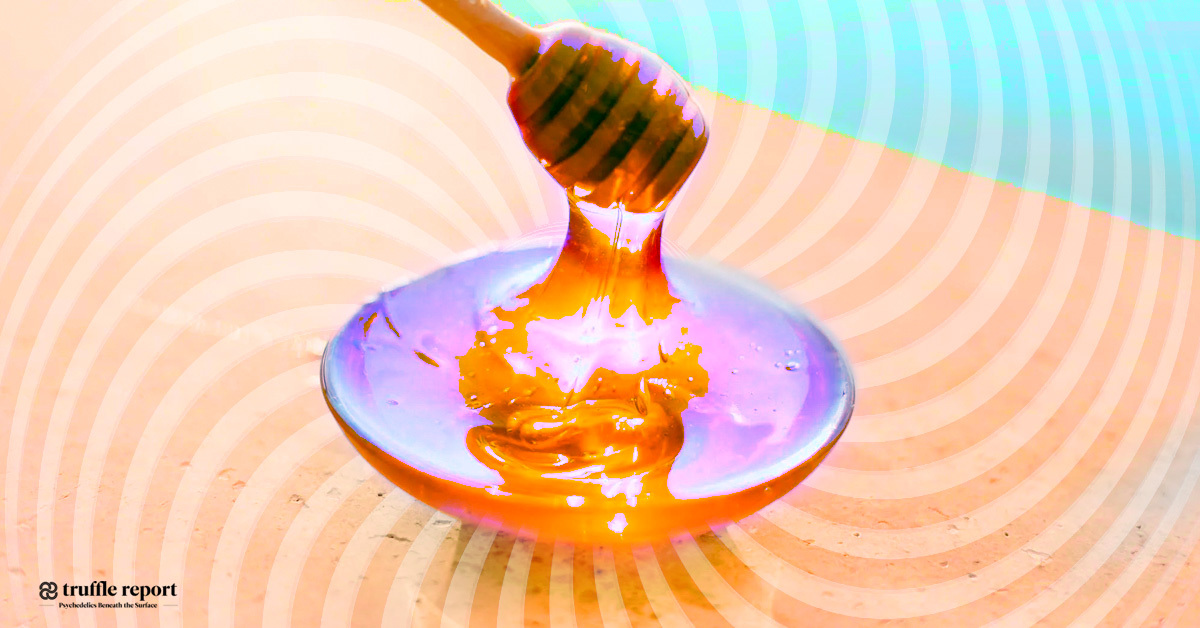 Blue Honey: The Sweetener Made From Magic Mushrooms

A couple of months ago, Truffle Report discussed culinary delivery methods for magic mushrooms with chef Sammy. As it turns out, there are lots of ways to get creative in this venture but one thing we didn’t talk about was psilocybin-infused liquid honey, sometimes called shroom honey, or more properly, blue honey. There are at least a couple of ways to obtain a psychedelic sweetener, but today we’ll be discussing the blue method.

Author’s note: Thoroughly researched information on “blue honey” is relatively sparse, so this article is based largely on anecdotal accounts. If there’s anything important we missed, be sure to let us know in the comments!

The Blue Version of Psychedelic Honey: What is it?

Blue Honey does not occur naturally and must be prepared at home. The process involves:

Blue Honey does not occur naturally and must be prepared at home. The process involves:

Supposedly, the mushroom honey will only turn blue if the whole mushroom has been bruised beforehand. This process can take up to 4 months, but has the advantage of preserving the active ingredient, psilocybin. In fact, there are reports of this method being used to illegally smuggle psilocybin mushrooms.

According to the culinary encyclopedia, Larousse Gastronomique, honey generally comprises: 17-20 percent water; 76-80 percent sugars (mainly glucose and fructose), and small amounts of minerals like calcium or magnesium. This high sugar-to-water ratio creates an osmosis effect. The sugar draws moisture from things that are stored in the liquid, as well as any accompanying bacteria. This is what makes honey such an effective preservative, as well as providing a means to draw psychedelic compounds from psilocybin mushrooms.

As osmosis occurs, the honey may extract too much water and throw off the above ratio, which will remove its antimicrobial qualities. For this reason, it is extremely important that psilocybin mushrooms be dried as thoroughly as possible in order to avoid a potentially dangerous ferment.

In our discussion on psilocybin edibles, we pointed out the issue of solubility in preparing psychedelic food. Unlike cannabis, the psilocybin found in magic mushrooms is not fat-soluble and will not bind to butter or oil. This means that the easiest way to make psilocybin-infused baked goods is to directly add the dried, ground mushroom. The problem with this method is that you may not want your brownies to have the taste of mushrooms. Psychedelic honey addresses this concern, since the sweet flavour supposedly remains dominant even after the psilocybin extraction takes place.

In fact, the “blue honey” method may provide a great way to control flavour, depending on how you want to use your honey. Larousse Gastronomique also notes that the flavour of a type of honey depends on the species of flower from which the nectar is harvested. Varieties include orange blossom honey, thyme honey, and many more. In theory, one could select a variety of honey with a desired flavour and sugar concentration that complements certain preparations. As long the chosen variety has a high enough sugar content, this offers a wide breadth of creative possibilities.

As adventurous as you might be, maybe you don’t own a dehydrator and are worried about accidentally making fermented mushroom honey — this would be bad. So what else can you do if you want a psychedelic sweetener?

Update: Check out our follow-up piece on red “mad honey”