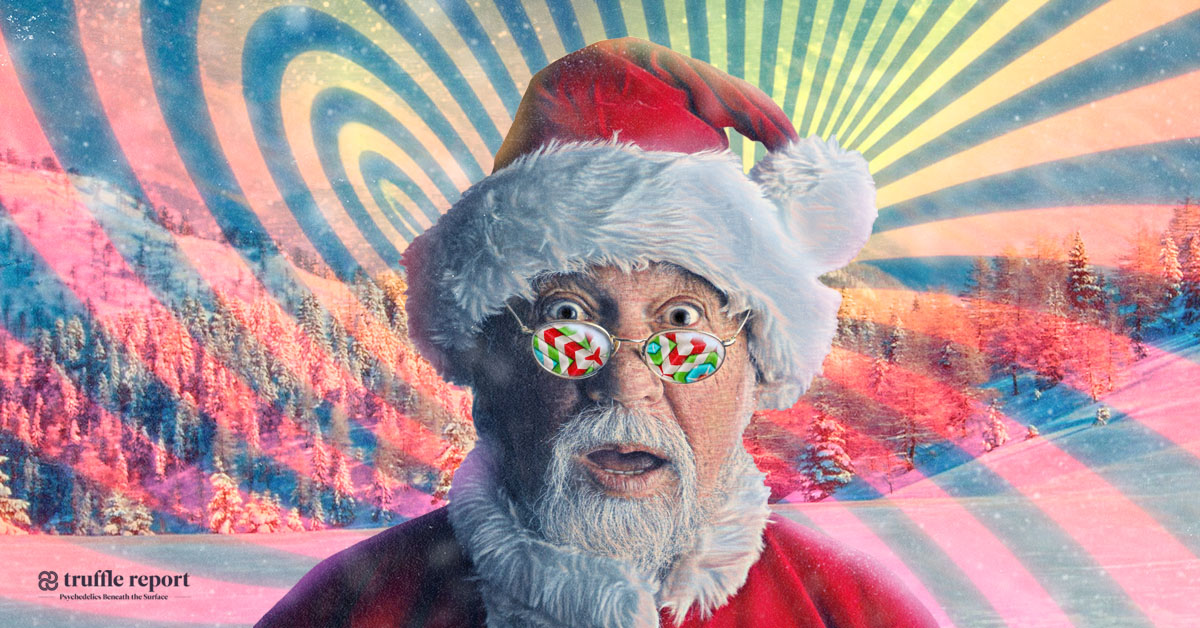 Last Christmas, we gave you our heart…and an article about the psychedelic and shamanic origins of Santa Claus and his flying reindeer. This time around, Truffle Report will take you on a journey across the many different cultures and traditions that inspired our Western Christmas celebrations. From gift-giving to the birth of a miraculous child, Christmas as we know it has been heavily inspired by shamanic rituals.

Shaman Claus is Coming to Town

Christmas celebrations vary depending on the region. For example, while North Americans celebrate Christmas on the 25th of December, Latin Americans, among others, tend to have a bigger celebration on Christmas Eve. However, if there is something that doesn’t change much from culture to culture that is the idea of Santa Claus, or at least some form of gift-bringer man. In Peru, where I’m from, we call him Papa Noel. In Chile — and this one is my favourite — they call him El Viejito Pascuero (The Christmas Old Man). Santa has many names, but have you ever wondered where this tale comes from?

We’re told he’s inspired by Christia Saint Nicholas, who lived in modern-day Turkey in the fourth century and was known for his exemplary kindness. Saint Nick was a pious Christian who stood for love, compassion, and good faith. At least according to official history. However, there is another theory.

This story begins in a faraway land. A land covered in snow, where reindeer roam freely. No, I’m not talking about the North Pole. This story takes place in Siberia and begins with Shaman. During the relentless winter solstice, Shaman descended down smoke holes in snow-covered homes, bearing healing red and white mushrooms to deliver to the cold families that inhabited these houses. These bright red mushrooms were none other than Amanita muscaria, a type of hallucinogenic mushroom native to Siberia. These bright red mushrooms with white flecks have long been connected with fairy tales and mystical creatures, but they also appear every year around Christmas.

Oh Shamanic Christmas Tree, How Lovely Are Thy Psychedelic Mushrooms

It’s no surprise that most of these supposed Shamanic Christmas traditions are based on Siberian folklore and rites. After all, Christmas is all about magical winter wonderlands even if you’re celebrating in the southern hemisphere. Just like Santa Claus, another common tradition around the world is to decorate a pine tree with ornaments. Presents, another Christmas staple, go under the tree, usually wrapped in bright coloured wrapping paper.

The pine tree represents another symbolic connection to the sacred Amanita muscaria mushroom. In his book Mushrooms and Mankind author James Arthur mentions that A. muscaria, also called fly agaric, is found across the Northern Hemisphere under acorns and birch trees, with which the fungus have a symbiotic connection. According to him, this could partially explain the practice of a Christmas tree with bright red-and-white presents underneath it.

One of the key elements of Christmas as we know it today is the concept of gifting. Sure, we’re often told not to be materialistic, and that Christmas isn’t about the presents, but who doesn’t love a good gift?

Shamanic cultures of the arctic were closely intertwined with the environment through things like mushrooms, in ways that honoured and celebrated the mystery and magic that life and experience provided to the people. What plants, game, or medicine these people managed to find could often be the difference between life and death. The Shaman and the people would absorb knowledge and wisdom directly from these sacred plants and had experiences that they deemed divine.

Joy To The World, The Sun Has Come…

While Christmas trees, gifts, and Santa Claus are all pretty awesome, Christmas is at least nominally about the storied birth of Jesus Christ. Whether you believe or not, the religious aspects of Christmas are all about celebrating his timely arrival on Earth. In this case, the birth of an almighty being on December 25th could be closely related to pagan sun-worship traditions.

Interestingly enough, an annual alignment with the sun coincides with Jesus’ supposed birth. On the December 21st winter solstice, the sun reaches its farthest southern position thus marking the northern hemisphere’s longest night. After that, the sun appears to be static for three days. The sun then resumes its northern ascension on the morning of the 25th. This can be seen as the sun’s “rebirth” after spending the winter in the land of darkness. When the sun rises again, it is a time to rejoice in the light! The sun is not only the Earth’s main source of light but our source of life. The Sun, or the Son, is the saviour.