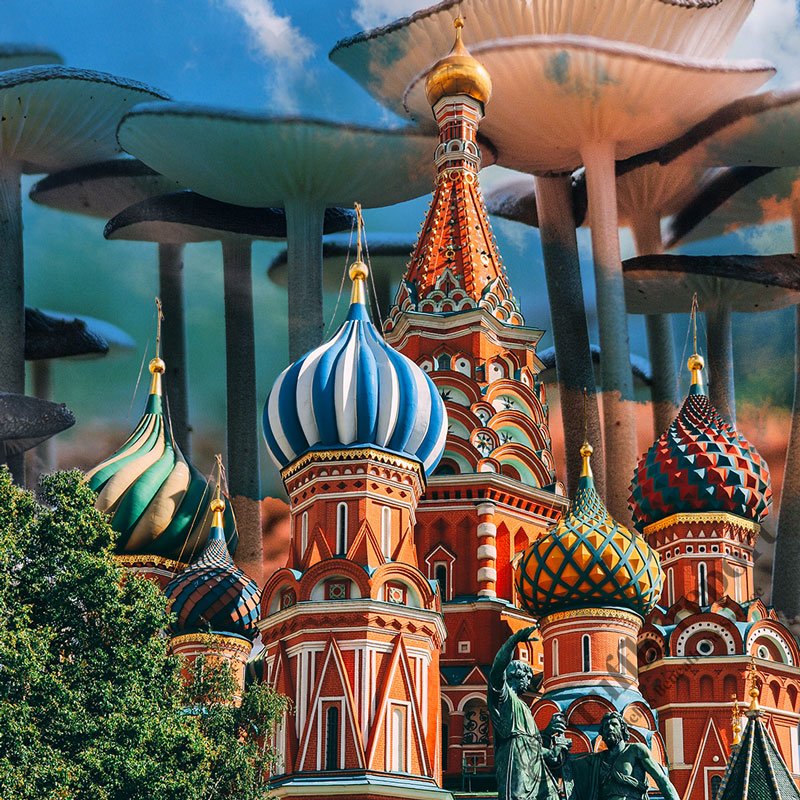 Psychedelics Behind the Iron Curtain

Historically, psychedelic drugs are usually associated with hippies, the summer of love, and the late 1960s in the United States. Flamboyant musicians, artists and just plain “freaks” as some called them were connected by ideals of peace, love, and freedom of thought. In this sense, the Soviet Union might have appeared to be the worst place on earth for a good trip, with its strict rules and pervasive state censorship machine. Truffle Report looks into a mushroom hoax, LSD experiments, and drug culture behind the Iron Curtain.

The idea of a hippy movement in the U.S.S.R. may seem odd, but the lack of sensationalist media coverage that young people getting high aroused in North America made it no less appealing. Through the 1970s, a subcultural network called Sistema (system in Russian) connected hundreds of thousands of Soviet youth who believed in peace, freedom, love, and equality.

The Estonian director and filmmaker Terje Toomistu shot a documentary about hippie culture spanning from Soviet-re Estonia (then a part of the U.S.S.R.) to Moscow. According to Toomistu, “Emphasizing the importance of sensorial pleasure, kaif (meaning ecstasy, pleasure, or high) became one of the central notions that shaped the practices and lifestyles of the hippies. There was a widespread desire among the hippies to experience something more than the bleak promise given by the Soviet power regime.”

“It should be noted that LSD was an extremely rare substance in the Soviet Union. What is paradoxical is the fact that LSD was produced as medication, completely legally and with the support of the Communist government of a neighbouring country. The substance was available to a small circle of scientific professionals, who used it for experiments and therapy. Back then, the public knew nothing about psychedelics,” wrote Toomistu.

According to Juliane Fürst, a co-producer of the film and head of the department of “Communism and Society” at the Centre of Contemporary History in Potsdam, the most common way to get high was through combinations of prescription drugs, often morphine or homemade opiates.

“Morphine came about because many World War II veterans were prescribed it. You could buy morphine on the black market. You could sleep with the ambulance staff to get it, or you could steal it from a dying relative. By the end of the late 1960s to the early 1970s, morphine died out. The new drug that came in was a home-made opiate. It could be consumed as kuknar – a strong poppy seed tea – or as mak, which was similar but was injected not drunk. Hippies built a self-sustaining barter economy around it where nobody made profits off it. The first dealers appeared when the Soviet soldiers returned from Afghanistan. It is remarkable that nobody died from kuknar back in the 1970s and 1980s. There were no rehabilitation programs developed for the drug users. Back then, the whole psychiatric profession was caught up in a discussion about schizophrenia. Drug addiction was linked to this disorder, so the patients were treated the same. In the 1980s, a synthetic drug called vint came out, and it killed many people. It was basically the same stuff that had been produced in Germany in the 1920s and given to the German soldiers in Blitzkrieg. Someone found a way to make it. There are conspiracy theories circulating among the hippie community that the KGB introduced this drug with a purpose to kill off some troubled youth,” she tells the Los Angeles Review of Books.

In 1954 several researchers across different institutes in Prague, including Jiří Roubíček at the Psychiatric Research Clinic and Miloš Vojtěchovský at the Research Institute for Human Nutrition, began their “experimental psychosis” project to record the psychological effects of hallucinogenic drugs including psilocybin, mescaline, and LSD. A sample of LSD-25 was sent to the Psychiatric Research Institute in Prague by the Swiss pharmaceutical company Sandoz with a letter explaining the possibilities of the drug. Psychiatrists were also able to experience the effects of the drugs themselves. Oldřich Vinař later said that “you sometimes knew there was a new drug around when you saw Votava [the pharmacologist responsible for synthesizing and testing new drugs] lying in the corridor.”

One of the participants in Roubíček’s study on brain activity during an LSD trip was Stanislav Grof. The process involved sitting in a dark room and being exposed to a strobe light, which flashed at different frequencies while the brain’s activity was measured by an electroencephalograph. Grof experienced visual hallucinations and a deep sense of personal psychological insight.

According to an article by AtlasObscura, “dozens of experiments involving the psychedelic drug (LSD) were carried out in Communist Bulgaria, from 1962 to 1968, by the Bulgarian psychiatrist Marina Boyadjieva. Among the human guinea pigs were doctors, artists, miners, truck drivers, and even prisoners and mentally ill patients. These research subjects were involved in some 140 trials.”

By August 1965, the Swiss company had stopped manufacturing the LSD entirely. That same year, the U.S. Food and Drug Administration began to withdraw the licenses for experimenting with the drug on humans, ending the official and above-board research. In 1974, after Leonid Brezhnev signed the first disarmament agreement with American President Richard Nixon, Czechoslovakia ceased production of LSD and banned its use.

Lenin Was a Mushroom?

Who doesn’t love a good conspiracy theory? Vladimir Lenin, the main force behind the Russian Revolution of October 1917, is one of the 20th century’s most beloved and reviled cultural figures. In 1991, Soviet citizens were offered a particularly bizarre theory about their former leader.

Seven months before the U.S.S.R. called it quits, a Soviet TV show called The Fifth Wheel suggested that before he died, Lenin had morphed into a psychedelic mushroom. Sergei Kuryokhin, a famous musician and actor, spent over 30 minutes on national television explaining to host Sergei Sholokhov his theory behind the Bolshevik revolution.

“I have indisputable evidence,” he said. “The October Revolution was the brainchild of people who’d been taking hallucinating mushrooms for years, and in the long run, mushrooms replaced their personalities, and they turned into mushrooms. So, I just want to say that Lenin was a mushroom. Furthermore, he was not just a mushroom, but also a radio wave.”

Throughout the interview, Kuryokhin provides “proofs” of his theory, including a correspondence between Lenin and Georgi Plekhanov in which Lenin writes about eating mushrooms and feeling “marvellously well,” and notes that “Lenin spelled backwards is ‘ninel’ – a French dish made of mushrooms in a special way.” Kuryokhin also showed a diagram comparing “bronevik,” the armoured car from which Lenin gave his speeches, to the root structure of a psychedelic mushroom.

He also talks about his field research in Mexico, the work of Carlos Castaneda, frescoes in a church that resemble “a certain event from the history of Mexico, which appeared to be very similar to the October Revolution,” and an object on Lenin’s desk that he identifies as a species of psychedelic cactus, either Lophophora williamsii or turbinicarpus.

At that time, Soviet TV shows were not known for their sense of humour concerning communist icons such as  Lenin.

“Millions of television viewers found themselves at a loss: some were completely confused about the program; others recognized the extreme irony of stiob [form of irony, a joke] but were stunned that such a genre could be performed on television and, moreover, that it could be directed at Lenin; and still others took the program at face value and were shaken by its iconoclastic revelations,” an associate professor of socio-cultural and linguistic anthropology at the University of California, Berkeley, Alexei Yurchak, writes in a 2011 paper for the Slavic Review. “When the program ended, the studio was overwhelmed with phone calls from viewers – some wanting an explanation, some protesting, and some laughing. Even educated and well-informed members of the intelligentsia were confused.”