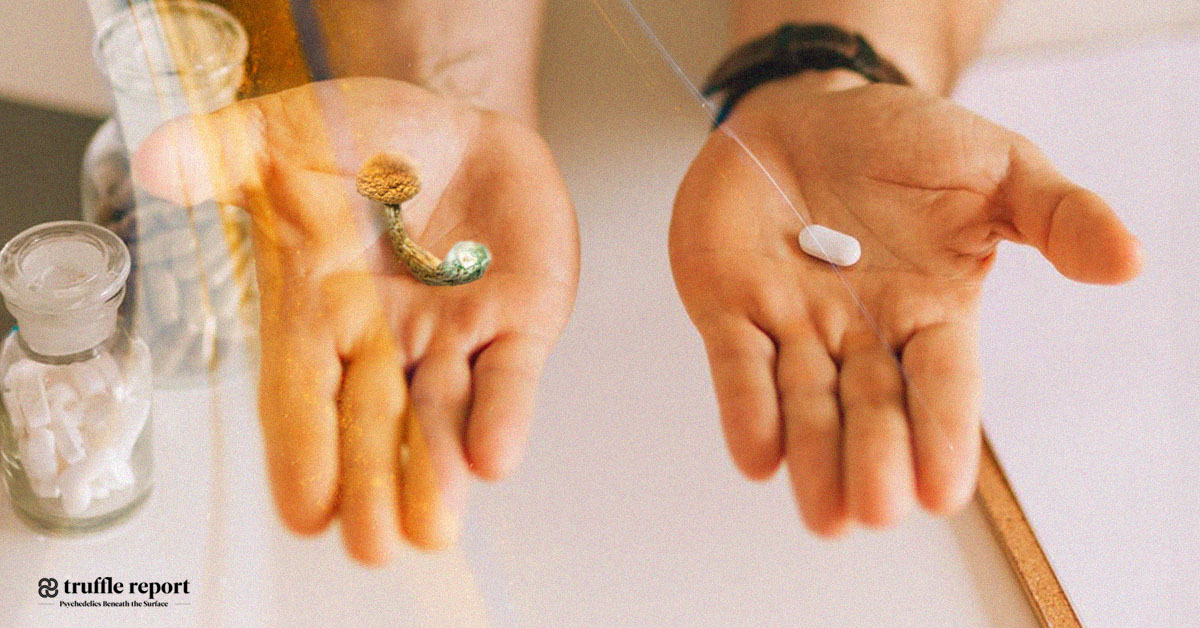 Psychedelics are showing promise as a treatment for many mental illnesses, including depression, anxiety, and PTSD. With the growing burden of mental health disorders worldwide, there is a reliance on traditional doctor-patient relationships. This may cause patients seeking help to miss out on the role of pharmacists as a critical part of the ever-changing healthcare system. Truffle Report reached out to pharmacists in the psychedelic field to discuss their part in the clinical process of psychedelic-assisted therapy.

“Pharmacists will be critically important for the effective integration of psychedelic-assisted psychotherapies into existing care plans. Because the models for these interventions are quite different from those used for current generations of antidepressants, this will require a lot of coordination across the healthcare team, including the use of the medication expertise of pharmacists to monitor drug-drug interactions, plan tapers of existing medications, and put in place plans for follow-up care,” Cody Wenthur, Professor and Program Director at the University of Wisconsin-Madison School of Pharmacy tells Truffle Report.

“Pharmacists also have an important role in mitigating any potential harms to patients that arise from psychedelic use, including presently, as they can direct individuals to resources like the Fireside peer support network or Zendo project,” he adds.

The Role of Pharmacists

The public tends to ignore pharmacists. However, ​​according to Wenthur, pharmacists are likely to be the most accessible healthcare professionals for many individuals around the world, and pharmacies themselves are already embedded directly within the communities they serve.

“Given the severe shortages of mental health professionals in many regions, this very accessibility provides an enormous opportunity to help provide desperately-needed intellectual and logistical support for the expansion of quite resource-heavy drug-assisted psychotherapy approaches. Drug education has also been historically lacking in general. As the drug experts, pharmacists are on the front line of answering patient questions and managing therapeutic expectations, as well as working to provide accurate, trustworthy information to all members of the public,” says Wenthur.

Benjamin Malcolm, Board Certified Psychiatric Pharmacist and Founder of Spirit Pharmacist, stresses that the role of the pharmacist in medicine or on the healthcare team focuses on two primary things – safety and efficacy.

“While psychedelic drugs have special qualities and effects that set them apart from other drugs or medications, they’re no different from other drugs in that there are safety considerations, contraindications, drug-drug interactions, and particular methods of administering them that increase safety and potential benefits. So, I think pharmacists can really play an important role by focusing on championing these things,” says Malcolm.

“Beyond things like screening individuals, their illnesses, and other medications they may be taking for appropriateness of psychedelic use, drug-drug, or drug-illness types of interactions, clinical pharmacists play important and leading roles in the development of systems of medication distribution and protocols for safe and effective use as well as educational efforts about drugs to other healthcare providers and the general public,” he adds.

According to Kelan Thomas, Board-Certified Psychiatric Pharmacist and Associate Professor of Clinical Sciences at Touro University California College of Pharmacy, the clearest path to involvement would be in the field of psychiatric medicine.

“As the drug information experts, pharmacists are particularly skilled at navigating antidepressant tapering or drug-drug interactions relevant to psychedelic-assisted therapy. There will also be a REMS for psychedelic medicine and pharmacists will also likely be part of that process,” says Thomas.

Since most psychedelics still have Schedule I status, they have been given minimal coverage in  pharmacy schools.

“Ironically, they may not even be covered in great detail in courses that otherwise discuss substances of abuse due to their lower risk profiles for abuse and overdose as compared to other classes of illicit drugs or abused substances. This educational gap makes it difficult for many clinicians, including pharmacists, to speak about psychedelic drugs with the confidence that they are sharing accurate information. Including better information in healthcare professional curricula and expanding continuing educational opportunities on this topic is quite important,” says Wenthur.

“At this time, most licensed healthcare professionals do not feel comfortable discussing the use of psychedelic drugs. Probably the biggest reason this occurs is that there’s still a lack of high-quality clinical research for many psychedelics. Institutions and professional organizations do not offer much in the way of programs to help them discuss psychedelics with confidence in their knowledge, and that the legal restrictions around psychedelics make persons hesitant to discuss therapeutic uses of drugs that are not approved for therapeutic purposes,” adds Malcolm.

How Should You Ask About Psychedelics?

At this time, most psychedelics do not have an FDA-approval for treating any mental health condition, with ketamine being the exception. According to Wenthur, inquiring about esketamine or other ketamine therapy models, such as ketamine infusion or ketamine-assisted psychotherapy that might be available in your area, would likely be a more fruitful place to start.

Malcolm believes the best way to have an open conversation about psychedelics with a pharmacist would be “to have some judiciousness in who you approach and some strategy to get an idea of their willingness to have a conversation.”

“If wanting to test the waters, opening with a question like ‘did you hear about the results from recent studies about psilocybin for depression or MDMA for PTSD?’ may be effective ways of opening a conversation and gauging the level of knowledge or willingness to speak on the subject from their response. If it feels they are knowledgeable and it’s safe, you can then broach a more intimate conversation about whether they feel you could benefit,” says Malcolm.

“Obviously, this is kind of a disappointing answer as pharmacists really should be and are often thought of as the most available or public-facing healthcare professionals. However, the points about having little awareness of positive research or carrying stigmatic attitudes as well as simply not having the time for the kind of conversation that does the topic justice in their workflow are all valid. In some ways, this isn’t an issue that’s even unique to psychedelics. For example, depending on who you’re talking about there could also be similar risks in opening a conversation about emergency contraceptives like Plan B or use of drugs like suboxone for Opioid Use Disorder.,” he adds.

According to Malcolm, “choosing pharmacists that work in clinical settings with longer times for discussion, ones you already have good personal relationships with, as well as those that specialize in mental health, neurology, or pain and palliative care may be higher yield opportunities for deeper conversations about psychedelics.”

Thomas stresses that clinical pharmacists should always help educate the client to reduce any harms associated with substance use.

“It is important to understand that psychedelics are not a quick fix, but they may provide a novel therapeutic opportunity for the client to engage with psychotherapy and potentially improve their mental health more rapidly than current medication options,” he adds.