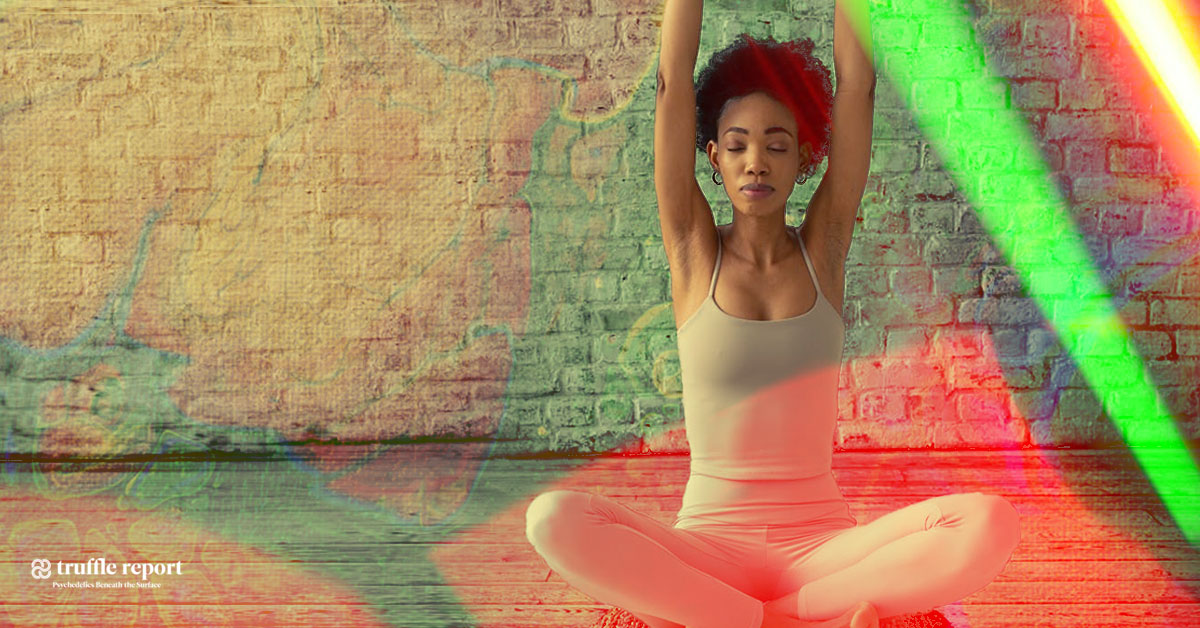 When hearing about how yoga “connects” you to your true essence and how it can aid with mental health, it is hard not to think about psychedelics as well. Psychedelic substances are also said to promote mental health by helping users connect with their inner selves. Many people who choose to microdose do so hoping to achieve ongoing healing effects without experiencing some of the most intense aspects of psychedelics. Some even claim that microdosing before exercising improves the results of their workout. Naturally, users are now also microdosing before their yoga practices.

Yoga is so much more than just physical exercise. When you practise yoga, you’re not only strengthening your body’s muscles, but also strengthening and rebooting the hard-working computer that controls them: your brain. In simple terms, yoga is meditation with movement. It synchronizes mind, body, and soul, and is said to be an amazing way to dive deep and reconnect with your true self. In the last few decades yoga has become incredibly popular in part thanks to celebrities like Jennifer Aniston who advocate for its physical and mental benefits.

What do the gentle effects of yoga and microdosing add to the practice?

Integrating Yoga to the Psychedelic Experience

Michelle is a 27-year-old woman from Talara, a beautiful small city by the ocean located in the northwestern region of Peru. I met her many years ago through some mutual friends. Recently, I noticed she was uploading pictures to her Instagram stories about her psilocybin mushroom growing journey and decided to ask her about it.

Michelle has been practicing yoga for the last three years. She initially started her practice as a tool to help with her depression and anxiety and it quickly became part of her daily routine. Around eight months ago, she started experimenting with psilocybin as a tool in her mental health journey, while growing her own Melmac Penis Envy mushrooms in her bedroom after extensive research on their cultivation.

“I decided to take a microdose just to be careful. I must have had around one gram. It was then when I realized how incredible the effects of incorporating psilocybin to my yoga practice could be,” she said. Please note that the actual definition of a microdose varies depending on who you ask. One gram of psilocybin is, in many individuals, sufficient to produce actual hallucinatory effects rather than the sub-perceptual results sought by many in the microdosing community.

Michelle said that after taking that small initial dose, she was able to continue with her normal activities. She was colouring with watercolours when she started feeling a slight trembling sensation in her hands and decided to do some yoga instead. She wanted to enjoy the hypersensitive moment that she was experiencing.

“That practice was slow but incredibly intense. I even cried from happiness after I finished. I couldn’t understand why I was feeling such a big connection with the present moment. I was in my room for around three hours after consumption.”

Michelle says that after that session, she felt grateful and connected to the universe. She experienced an inexplicable sensation of love and unity towards everything and everyone. For her, it is not so much that she integrates psilocybin into her yoga practice as yoga into her psychedelic experiences. Michelle explains that while psilocybin helps a lot with her depression, it can sometimes exacerbate her anxiety, but yoga helps her keep calm and remain grounded. She incorporates it before feeling the peak effect of the substance, though she doesn’t always integrate the two, and explains that when she tried full psilocybin doses or when she had a different strain of mushrooms (Tidal Wave), she either found it very hard to coordinate her body, or found that the feeling of dissociation didn’t allow her to do much other than meditate.

“I would say microdosing and yoga complement each other almost perfectly. Psilocybin makes you hypersensitive and yoga makes you connect with your body. It works even better when you manage to ‘silence’ your mind. In those moments I even feel like my body moves on its own and I just follow, linking movement and conscious breathing without any ‘noise’ from my mind. This allows me to practice without following a specific routine but just enjoy yoga as fluidity and liberation.”

Yoga and Microdosing: What to Take Before

While microdosing psilocybin before yoga is much more common, microdosing other psychedelic substances such as LSD or MDMA for the same purpose may also be effective. According to research and clinical trials, spiritual practices combined with small psychoactive doses can help reduce the symptoms of anxiety and depression. According to a study conducted in Australia, people who engaged in both yoga and microdosing found that they experienced fewer feelings of fatigue, stress, and depressive episodes.

Could Psychedelics Increase Your Energy to Optimize Yoga?

Many microdosers who go to the gym report feeling more energized after consumption. Microdosing is also said to improve coordination, balance, and reflexes, among other cognitive skills. Some people even claim that their best workouts happen on their microdosing days.

When it comes to aerobic or weight training, some users say they feel “unstoppable” and claim to have higher endurance. Although yoga is not necessarily a cardio workout, an intermediate yoga flow does need considerable muscle and stamina. Also, when practicing an intensive Ashtanga or Vinyasa sequence, that “unstoppable” sensation and increased endurance can certainly come in useful. Meanwhile, the alleged improved coordination and balance can help in moving to the next level in balancing asanas or postures such as tree position, crow posture, and handstands.

Yoga and Microdosing: Psychedelics for Focus and Awareness?

Microdosing psychedelics to improve focus and awareness is not uncommon. Many people even say that this leads to increased productivity. These substances can benefit users with greater focus, self-awareness, and clarity of thought. When working on a project or creative endeavour, they can help you become immersed in it for many hours without being easily distracted. This increased focus and awareness can be incredibly beneficial when practicing yoga. Yoga is a practice that requires mindfulness and psychedelics could help users be less influenced by external factors or even their own thoughts when practicing yoga.

The practice of pratyahara can benefit from increased attention and awareness. Pratyahara is an important aspect of Patanjali’s yoga sutras, which might be considered the bible of yoga. One of the ultimate goals of yoga is pratyahara, which literally means “withdrawal of the senses.” Because psychedelics reduce the brain’s fixation with the ego and inclination to self-worry, microdosing makes obtaining this fully mindful and aware state a bit easier.

In simple words, microdosing before yoga or incorporating psychedelics into your yoga practice can be beneficial but every experience is different. Keep in mind that when doing yoga, it is extremely important to remain mindful at all times. It is important to not push your body to the extreme. The key is to stay aware of your limits while gradually expanding them and to listen to your body at all times.