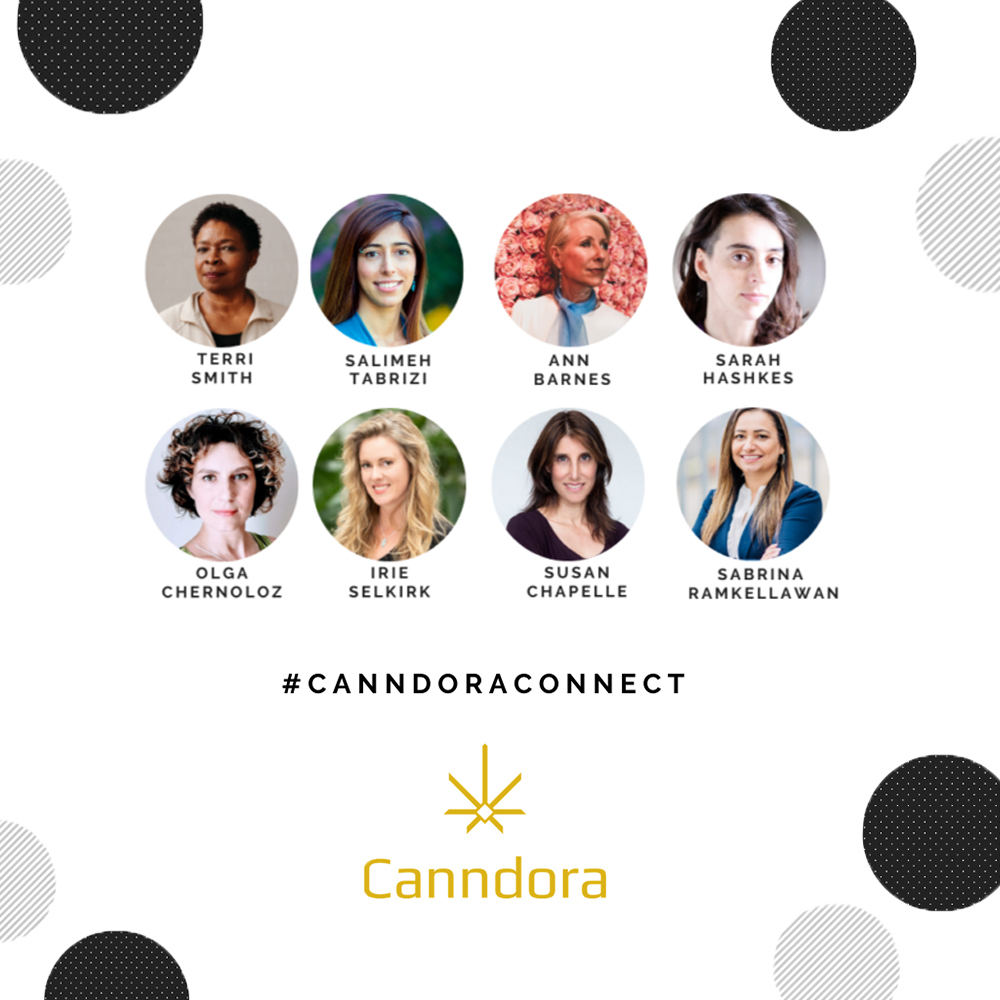 Female leaders in the psychedelics industry have been brought together virtually for Canndora’s Women in Psychedelics Virtual Event. Held on December 2, the event featured eight presenters from across the field divided into two panels and an opportunity for networking and collaboration.

Psychedelics and the International Market

The event kicked off with a panel discussion by Wake Network chief mycologist Terri Smith, Rise Wellness Retreat co-founder and director Irie Selkirk, and Red Light Holland director Ann Barnes, moderated by Knowde Group chief operations officer and co-founder Sabrina Ramkellawan. The topic was the international psychedelic market and how the industry is emerging across the globe.

Presenting from Jamaica, Smith spoke about how her role as chief mycologist put her in charge of the cultivation of psilocybin-producing mushrooms in the country. “What’s different about what we do is that we have a decentralized approach to producing psilocybin – our mushrooms are grown by networks of women across the island of Jamaica. We have been developing artisan growers across the island,” Smith said.

“When I started growing mushrooms in Jamaica 10 years ago I was told Jamaica was not mushroom country. As it becomes legal in other jurisdictions … there has been a groundswell. The fact Jamaica has many microclimates and we are growing with a decentralized production system means we can grow many different types of mushrooms. We have the opportunity to play out different types of psilocybin other people are not growing across the island. Jamaica is a special place to be doing all of this.”

Smith is particularly excited about Wake Network’s commitment to social impact. The company’s policy of inclusivity, said Smith, was not merely a gesture. “Psilocybin mushrooms cannot be grown at the commercial level in Jamaica without having someone who understands the climate and culture. Every community we enter must be better when we leave, financially, socially, and environmentally. I’m very excited to represent not just Wake but the artisan farmers that make up our company.”

Need to Look at Psychedelic Industry ‘With Eyes Wide Open’

Responding to a comment by Ramkellawan that psychedelics “is like the new cannabis for investors,” Selkirk said it was important to acknowledge the influx of capital entering the field. She said investors needed to look at the industry with “eyes wide open.” “This is not a way to get rich quick – this is long term drug development. This is about making an innovative change in mental health for the entire globe,” Selkirk said.

“There was a lot of ‘pump and dump’ in the cannabis industry, which was gross and it ended up creating a lot of socio-economic barriers. The patients ended up carrying a lot of that burden. Any investors who are starting up in psychedelics need to look at the triple bottom line and the social impact, and what we can do to improve the world as well as shareholders’ profits.”

Barnes said lessons from mistakes made in the cannabis space were being applied to the psychedelic industry. “The educational aspect is so much greater. Psychedelics is about education, not egos. Cannabis was very much about egos and it was a press-release driven market rather than science-driven. From that we can actually have the psychedelic industry give back to the community in terms of mental health treatments and benefiting people individually, versus the cannabis side which started out as a recreational play,” she said.

The differences between the cannabis and psychedelics industries are what makes psychedelics more dynamic and more accessible, especially to women, Barnes said. “There is a difference in scientific approach with the psychedelic industry having decades worth of rich research, and an academic base which wasn’t a reality in the cannabis space. In terms of pain management and mental health, psychedelic science is really fast-tracking on that side,” she said.

Chapelle said there was very little literature on how women were different from men when taking psilocybin. “The way we experience these drugs has not been really differentiated by sex in the 5-HT2A receptor,” she said.

“The prevalence of mental health disorders differs significantly between men and women and we haven’t done nearly enough work on the peripheral integrations of the 5-HT receptors. A lot of times when we study these drugs, we study the central nervous system but we don’t look at other things like inflammatory mediators. Especially with women experiencing most healthcare issues, substance use disorders, metabolic diseases … I see psilocybin and the hopes of mental healthcare research as a way to be able to connect across all of these divides and actually provide human beings with a way of broadening their horizons and accessing hope.”

Chernoloz said as far as gender went for psychedelics today there was very little data on how the response may differ by genetic makeup and gender, and she was looking forward to having that oversight fixed. “It used to be that the pharmaceutical companies would enroll primarily white people for their clinical trials. Now we understand that there is a lot of value in seeing the broad spectrum of genetic makeup and gender in response to different medications,” she said. “I am very proud as a scientist to say a big portion of the clinical research [Wake] is running in Jamaica is working with a population that has, the majority of times, been excluded from clinical trials.”

Hashkes said hormone difference was an interesting aspect, and because much of the research on hormones to date has been done on rats, how that data might translate to humans still needed to be considered. “When it comes to gender differences, there are mixed results out there. Some researchers are finding sex differences, some aren’t,” she said.

Hashkes said that, through a partnership between Radix Motion and Red Light Holland, she was investigating how academic research could be complemented by “big data” from members of the public who were already experimenting with psychedelic substances and had been for years. “Academic research is making slow progress. It’s so hard to get access to these materials and to get approval,” Hashkes said.

“We are looking at if we give them the best tools, tools we are using in research, to help them gather data, and if they are willing to share this data anonymously with the wider community, will that help us see wider patterns? Can we get thousands of people instead of the 13, or 20, or 30 people that are in a controlled academic research project?” she said. “I’m really hoping we take the lead on consent and privacy issues and hoping other companies see what we are doing, how much we care about the people who are going to be contributing their data, and this will help other companies realize this is what we should be doing and preventing misuse of this data.”

Hashkes said while there were limitations on this type of data collection, there was also a mass benefit, and she sees great potential for collaboration.