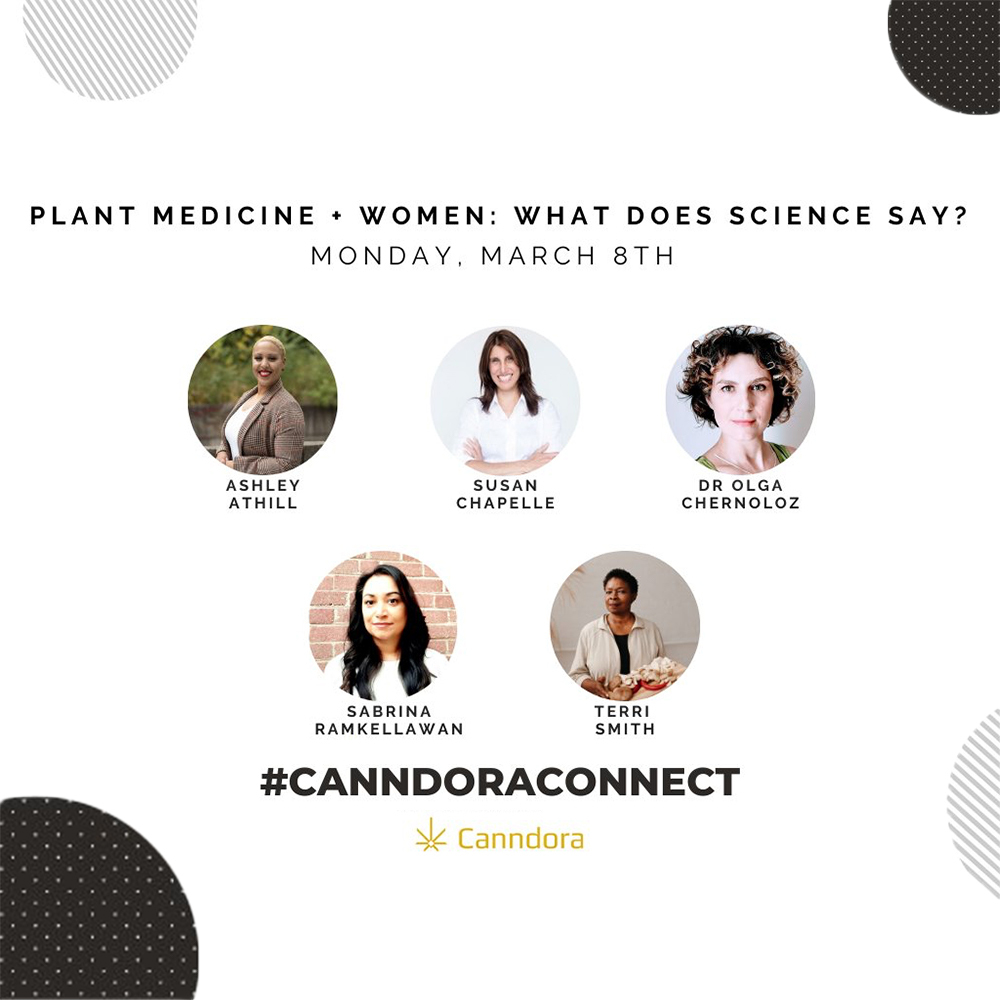 Female leaders in the psychedelics and cannabis industries have marked International Women’s Day 2021 with a virtual event hosted by Canndora. Held on March 8 and attended by about 65 participants, the event featured a panel discussion on sex differences in plant medicine between Wake Jamaica CEO Terri Smith, Wake Network chief scientific officer Olga Chernoloz, researcher and entrepreneur Susan Chapelle, and HRVSTR Cannabis CEO and co-founder Ashley Athill, moderated by Knowde Group chief operations officer and co-founder Sabrina Ramkellawan. The event also included a question and answer session with Chapelle, a panel discussion about bringing cannabis products to the market in Canada, and an opportunity for networking.

What Science Says About Women and Plant Medicine

Moderator Ramkellawan questioned the panelists over sex differences in terms of response to psychedelics. “Historically women haven’t been as well represented in drug trials, meaning a lot of medicines that have come to the market have been taken away. There are so many differences between women and men that it can’t be expected the drugs are going to work the same way,” Ramkellawan said. She added that a lack of diversity was also a problem in psychedelic clinical trials.

Chernoloz, a neuroscientist working in psychedelic research for Wake Network, said sex differences in relation to psychedelic medicine were actually unknown because research in this field has been restricted for decades. “To get your hands on these substances for a clinical trial is very complicated to this day,” she said. “For researchers to go down to the nitty-gritty of looking at how genders respond differently to these compounds  — we’re just not there yet. It is needed research because we need to account for potential differences in how our genetic makeup and corresponding hormonal changes may interfere or interact with anything we put into our bodies.”

Chapelle added that the National Institutes of Health in the United States now requires that gender differences be included in grant applications. “In the old days you could pick all men for a study but now you have to include gender representation and I love that,” she said.

Transgender and Non-Binary People and Psychedelics

Answering a question about how psychedelics such as psilocybin may be helpful for transgender and non-binary people, Smith said, speaking as a minority (a black woman) growing up in a majority culture, what psychedelics had done for her was give her the emotional and intellectual space to not care about what other people thought. “Whether I’m dealing with issues of my sexuality or my skin colour or my age, I am now confident in my skin,” she said. “Ten years ago, if you’d talked to me about a 60-year-old woman, I would think that’s a really old woman who is beyond any use in society. I’m now 63 and I have accepted where I am in the universe. I don’t need your permission to be who I am and that is the gift of psychedelics.”

Athill added that psychedelics also allowed her to be free from other people’s judgments. “For those individuals who are transgender or those who have a different sexual appetite, that might be beneficial for them as they move through their journey,” she said.

The panelists spoke about the barriers facing women entering plant medicine, with Chernoloz reflecting that they mirrored the barriers for a woman entering any industry. “They pertain to access to capital, business development, and this aspect of illegality that can be a bigger deterrent for females who are generally more averse to the criminalisation aspect of working with these substances,” she said.

Smith added that mushroom cultivation in Jamaica was being taken more seriously now that men had come to the table wanting to talk about it. Smith has worked with female growers on the island producing mushrooms for 10 years. “The women of Jamaica are rural, poor women and now they have become artisan creators,” she said.

“Now [growing mushrooms] is really cool to talk about, but for a long time, it was brushed off. I am a black woman and I started the conversation in a country of black people  — this was one case where it didn’t have anything to do with my skin colour, it had to do with the fact I was a girl.”

Chapelle added that she sometimes fed her ideas to men to ensure they were brought to the table. “We are still in that place where a man has to say your idea for it to be taken seriously, it has to come out of dude’s mouth,” Chapelle said. She added that the psychedelics sector could learn much from the cannabis space. “As women, we were exited from the cannabis space very rapidly. We had CEO positions and we had operations positions, but what happened with cannabis was like the tech bubble in the 1980s put on acid — it rapidly scaled and exited all the women.”

Addressing Smith directly, Chapelle added: “you protect your growers against 30 white-men companies rolling into Jamaica and growing mushrooms by paying off your ministers. That concerns me like you have no idea when we should be using women-led co-ops and integration of the countries that we roll into, and be very cognizant of how we are affecting the communities that we are in as market players.”

Chapelle also voiced her concerns that women-led businesses that produce psychedelics in the grey market would be forced out with legalisation. “With cannabis, women’s businesses and their connections to plant medicine went sideways when it was legalised,” she said. “I looked at the economic modelling of all of the legislation and the requirements. It is not sustainable with taxation and all the other costs involved with legalisation, and I’m deeply concerned for the mushroom market as well.”