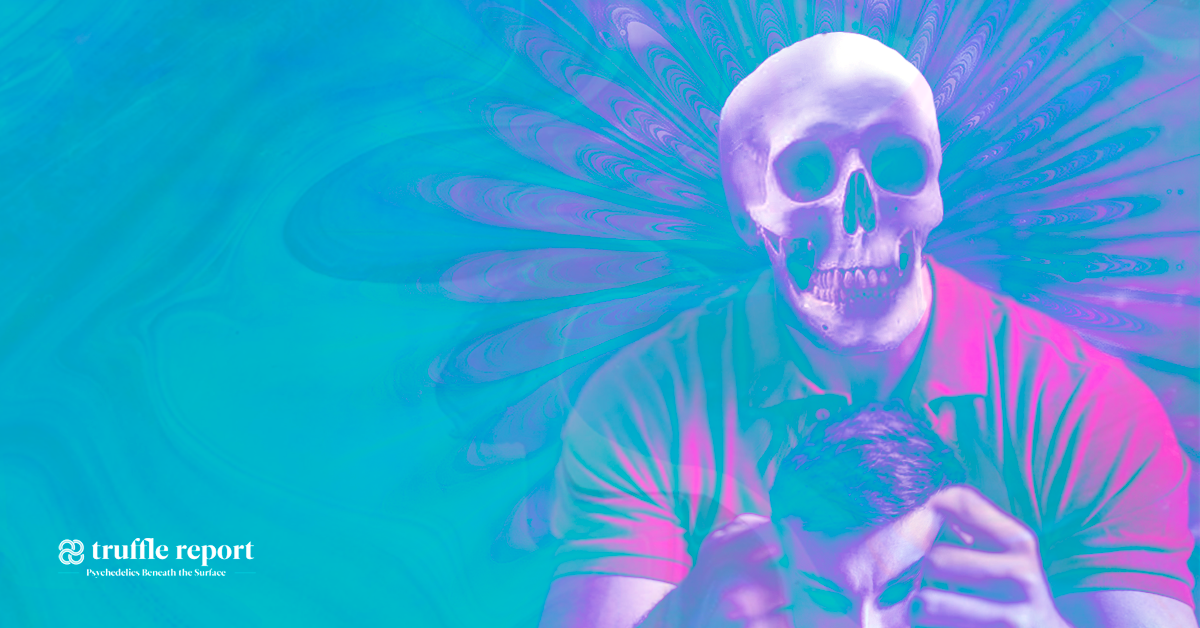 What is Ego Death? Science and Psychedelics

Psychedelic experiences can transform a person’s consciousness and sense of being. For some, the process is life-changing. For others, it can be terrifying. Psychedelic drugs such as MDMA, ayahuasca, psilocybin, and LSD significantly reduce activity in the brain’s default mode network, or DMN. This reduction acts as a switch to reboot the activity of certain functions of the brain, leading to ego dissolution experiences. As a result, the sense of self temporarily shuts down, which leads to feelings of isolation. This state of selflessness or psychic death, and the resultant feeling of connectivity with the world, is known as ego death.

What is Ego? The Sense of Self

In everyday language, the experience of ego is the extent to which a person thinks of themself. In psychology, the ego is a neutral concept that describes the self-consciousness system. It is a tool to understand an individual’s personality and the way it operates in the world, which can be profoundly impacted by a mystical experience.

The English word “ego” is the Latin word for “I”. The use of “ego” came into psychology mostly through the work of Sigmund Freud. In Freud’s theory, the human personality is composed of three elements known as the id, the ego, and the superego. These elements, for Freudians, create complex human behaviours.

What is Ego Death?

Ego death, also known as ego dissolution, is a psychological condition in which the sufferer feels the absurdity of life and the need to change, and can free themselves from the unpleasant experiences and establish the future. It can often increase empathy and openness, show the true reality and that everything in the universe is connected.

Ego death experiences fall under two types – positive ego-death, in those who find the experience beautiful, and negative ego-death,in those who find it terrible. As a defence mechanism, the ego creates fear, anxiety and confusion to keep itself attached. However, if a sufferer overcomes this fear, it may be a helpful step on the spiritual journey.

EgoEgo death is usually unpredictable and depends on the person’s state of mind. The one constant regardless of psychedelic drugs? It happens in stages, with loss of sense and experiences of mental time travel being commonly reported.

The first stage of ego death is “waking up”. The process of the spiritual awakening is the dissolving of the illusion that you are in a dream world and shifting in consciousness to the reality beyond the ego. In many cases, it can come with depression, anxiety, and feelings of being lost.

Stage 2 – The Dark Night of the Soul

The phrase comes to us from Spanish mystic and poet, John of the Cross. During the second stage, a person becomes extremely conscious of the separation from themself and other people. It is not a time of suffering and despair but rather a transition to mind freedom and joy. The Dark Night of the Soul embraces the spiritual experience of doubt, fear, emptiness, and despair, which are crucial in developing an authentic spiritual life.

It is the stage of exploration, a search outside the consciousness and ego, a path of self-discovery. The person starts experimenting with astrology, mysticism, yoga, energy healing, and practices that connect the mind, body, and soul.

The word “Satori” is a spiritual goal of Zen Buddhism, enlightenment. It is a glimpse in the consciousness, which terrifies some, making it impossible to continue, or life-changing, which leads to exploring more.

This stage develops the ability to understand what spiritual practices work and which have no effect. The soul begins to focus on self-expression and self-actualization, seeking ultimate fulfillment within life.

In this stage, the sufferer lets go of the patterns that were limiting. It is about understanding, identifying and getting rid of what is not a part of the true nature of the soul.

Stage 7 – The End of Search

This is the last step in the ego dissolution. In this stage, the ego still exists, but it becomes a tool for a sufferer. It is the state of inner peace and freedom.

The Psychedelic Experience and Ego Death

Ego death doesn’t necessarily involve psychedelics such as psilocybin, MDMA, Lysergic Acid Diethylamide (LSD), or DMT. The origin of ego dissolution has its roots in Eastern religion, specifically Hinduism and Buddhism, where the highest goal of spiritual life is the rejection of separate and self-centred existence. Psychedelic drugs, if anything, are a shortcut.

The effects of psychedelic experiences on consciousness are historically well-documented. Experimental studies with mescaline were used to model schizophrenia “self-disturbances”, including abnormal body experiences, and connection with surroundings. Others assumed that the substances replicated the symptoms of depersonalization disorder, often a negative experience characterized by feeling unreal and detached from mental processes and the body.

Due to psychedelics’ ability to decrease the activity of the DMN, they have therapeutic potential when it comes to treating depression, anxiety, and addiction.

Between 1954 and 1960, the psychiatrist Humphry Osmond treated about 2000 alcoholics with LSD. Osmond thought that hallucinogenic drugs produced symptoms similar to delirium tremens, a psychotic condition common in chronic alcoholics who stop drinking, which can involve hallucinations, anxiety, and disorientation. He thought the experience might shock the alcoholics into change. Osmond, along with Dr. Abram Hoffer, reported that 40% to 45% of the alcoholics who were treated with LSD had not returned to drinking after a year.

A study conducted by Imperial College, London assessed the impact of psilocybin-assisted therapy on twelve patients (six men, six women) with severe depression. These patients attended two dosing sessions seven days apart, with the attending psychiatrist allowing patients to experience uninterrupted journeys. All patients showed some reduction in depression for a period of up to three months.

A follow-up study suggested that the therapeutic impact of psilocybin was because of its ability to diminish the functions of the DMN, which corresponded to an ego-death experience. The goal of the study was to explore the link between psychological responses and brain activity to LSD. Treatment with psilocybin produced rapid and sustained antidepressant effects on nineteen patients.

Researchers at the John Hopkins University Center for Psychedelic and Consciousness Research demonstrated a study on psilocybin, finding evidence that it can trigger an ego-death experience in individuals. The research showed the effects on the region of the brain called the claustrum, a thin veil of neurons deep inside the cortex, which has an impact on attention and agenda-setting. Those patients who received psilocybin showed decreased activity in the claustrum, down 15-30 percent. The reduction of activity in the claustrum corresponds with the loss of ego.

Scientists from Maastricht University in the Netherlands conducted a double-blind, controlled trial with sixty participants, monitoring their glutamate levels while they were under the influence of psilocybin. Those subjects who were on the drug reported increased feelings of ego dissolution, as well as altered states of consciousness.

This study found that the two different regions of the human brain — the cortex and the hippocampus — had very different glutamate responses to psilocybin. The researchers found higher levels of glutamate in the prefrontal cortex and lower levels of glutamate in the hippocampus while patients were under the effect of psilocybin. This difference may be related to whether a person has a good or bad experience with their ego.