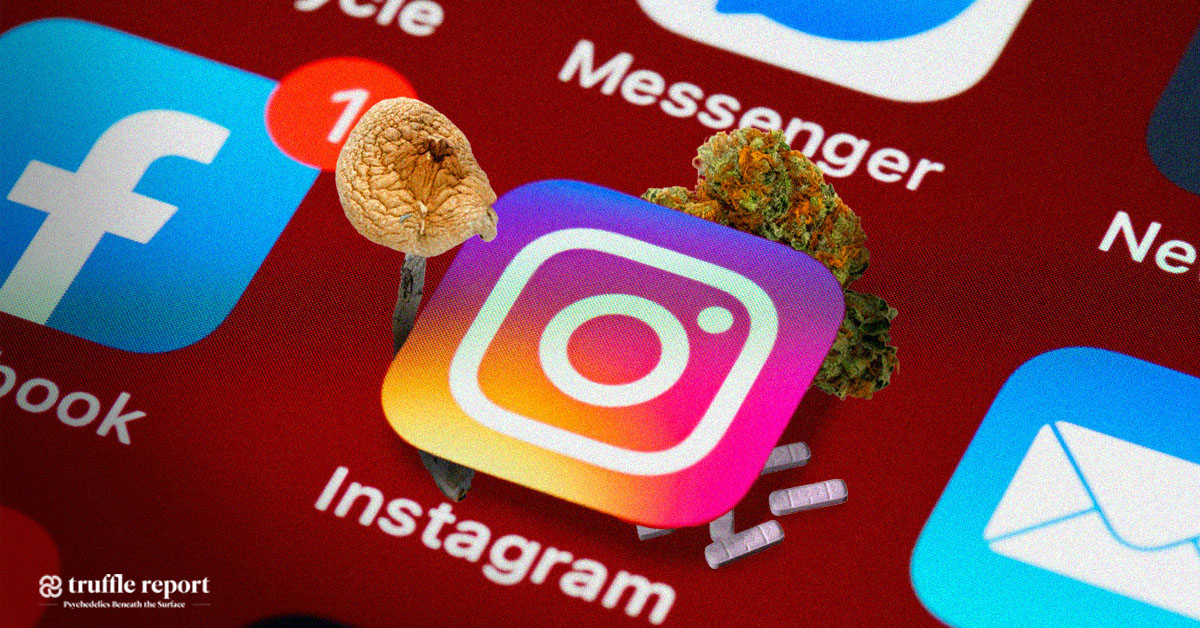 …They Were Surprisingly Open

In the first part of this series, we looked into how drug dealers use social media as a safe space to sell.

I was scrolling through my Instagram account one night when a message popped up in my DMs, “Hello nice to meet you. We got top quality mushrooms, DMT dust MDMA pills LSD both in bulk and retail…”

I stopped scrolling. I was being offered drugs over Instagram, an app owned and controlled by Mark Zuckerberg-led Facebook and known for its history for cancelling suspicious accounts belonging to drug sellers or sex offenders, and which has more recently been very publicly accused by a former staffer of promoting hate, division, harmful self-perception in young women, and even the January 6 U.S. capitol insurrection, for profit.

It’s hard to say whether or not my initial contact knew they were messaging someone who writes about the legal issues around psychedelics for a living. Wanting to know more about how the illicit drug trade on social media works, I created a separate account for the specific purpose of attracting more drug dealers by following accounts associated with psychedelics.

There were at least a dozen messages within a week, sharing details of a variety of products and prices for substances including LSD, MDMA, mushrooms, and DMT, while also assuring me that theirs was a safe anonymous business with a strong client base around the world. I only had to wait about a half hour after creating my fake account for the messages to start arriving. As I’m writing this article, I’ve just received another offer for “authentic full gram carts, pure DMT carts, CBD oil.”

Very much like any other business model in the digital age, drug dealers have embraced social media. While it’s hard to track the beginnings of the social grey market, the sheer volume of sellers on platforms like Snapchat, Instagram, and Facebook has grown exponentially in recent years.

Social media marketing works via algorithms that show you more of what you want to see. Unsurprisingly, a lot of us want drugs.

If a user is looking for psychedelics or drug-related pages, Instagram algorithms are fated to connect you to profiles and posts involved in illicit drugs despite the system supposedly put in place to deactivate such accounts. With only one image, two hashtags as my caption, and no further activity, my account attracted almost 100 sellers in two months. I didn’t try to speak to all of them, but many of those I did speak to shared their reasons for selling drugs on social media platforms very casually and openly with a prospective customer.

One seller wrote, “I have been a dark web vendor but there is serious entrapment and snitching.”

The dark web, in very simplified terms, is the decentralized part of the internet not indexed by search engines. Offenders use the dark web to buy stolen credit card information, drugs, and even hire professional hitmen or engage in human trafficking.

The seller continued typing while I waited patiently, “[On Instagram], I have never been entrapped and clients are respectful. That’s why I prefer dealing [with] psychedelic products because it’s a respectful community and it’s all about light and awakening.” The dealer was located in Ottawa, Canada.

It’s not hard to create fake accounts, while, at the same time, it is getting harder for tech giants to track their exponentially growing data sets. Accounts that are shut down can easily be replaced.

In 2018, Facebook and Instagram blocked opioid-related hashtags and deactivated accounts after US Congressional intervention, calling out social media platforms on illicit drug trafficking. Removing or deleting accounts doesn’t seem to have made the slightest dent in overall traffic. “Drug sellers continue to populate Instagram despite these actions and that these communities have changed their use of hashtags possibly to avoid detection,” says a study published in 2019, aimed at developing a machine learning approach to detect Instagram posts. Narcs can adapt, too.

While social media serves as the perfect expansion model for illicit businesses with loose monitoring policies in place, timeliness also plays an essential role. “Open social media was often a source to get new contacts, both for sellers and buyers, and it offered easy access to drugs that could be hard to get,” researchers say in a study published in 2019.

“…Drugs are something I can get my hands on [from peers] within five minutes, if I want to. So I would say that it’s actually easier… But things like prescription pills, that’s not so easy to get  hold of. I think that is why [people prefer Facebook/social media],”  a Danish drug dealer shared with researchers working on ‘Drug dealing on Facebook, Snapchat, and Instagram’ (2019).

No matter where you are in the world, you will get your ‘parcel’ within the promised timeline, usually between 24-48 hours. I feigned doubt to one of the sellers, who went so far as to provide testimonial screenshots from customers who had recently received packages.

A drug dealer’s strength lies in anonymity. Social media is only half of the digital invisibility cloak. The other is cryptocurrency.

The expectation of payment by some form of cryptocurrency, usually Bitcoin or Abra, was the only common factor among all the dealers that ended up in my DMs. One seller asked, “Do you have Bitcoins? Because that’s how I accept payment since it’s safe, secure and anonymous.”

A seller from California stated, “Bitcoin is very important and easy to use.” Another promised to help me understand, saying, “I will personally walk you through the process so that it will be less of a hassle for you,” while a third simply shared his Abra cryptocurrency wallet details.

Cryptocurrency ensures encryption and anonymity to sellers. ‘The rise of crypto markets on the dark web has made both purchasing and selling drugs possible without the direct threat of being caught,’ a march 2019 paper in the Drug and Alcohol Review mentions.

The anonymity of crypto markets has formed a trust system that allows dealers to function without fear. However, crypto markets and transactions may soon come under greater scrutiny as they gain prominence.