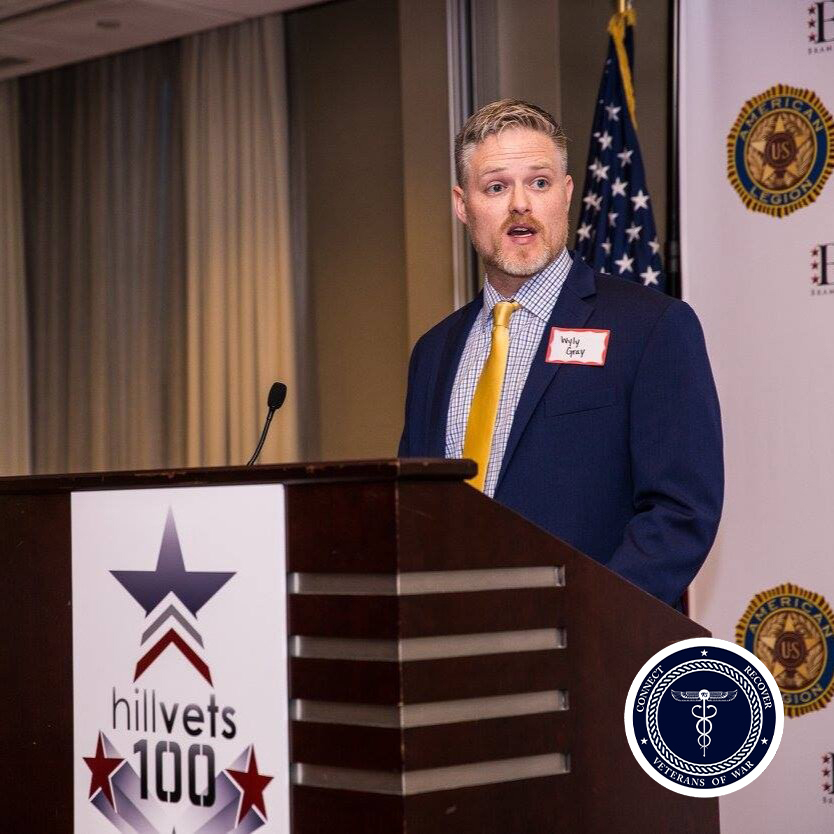 Wyly Gray of Veterans of War on Psychedelics for Veterans

Gray joined the Marines at the age of 18. Young and full of life, he felt he was fighting for his country, for democracy, and to keep America safe. This feeling was challenged the day he realized that no matter what he did as a part of the military, his job was ultimately to kill.

“Did I do the right thing? Every single of those bullets killing people went  through our hands. This is something I struggled with for years. My responsibility. Clearly, I was sold a very different reality than what I believed I was fighting for,” Gray says, questioning his past. He is 38 years old.

Veterans that deployed put their lives at stake to serve, but when it’s time for them to return to their families after long-fought wars, they often find themselves coming home as different people. While some return full of patriotic fire, finding solace in the heroism of their acts, others find themselves gripped by horrific memories of life-threatening events. The two groups are by no means exclusive.

A U.S Department of Veterans Affairs study published in 2018 reports that 15.7 percent of deployed veterans in Iraq and Afghanistan screened positive for PTSD. The overall percentage for PTSD of both deployed and undeployed Veterans was 13.5 percent.

To tackle issues such as PTSD, anxiety, depression, veterans are now considering psychedelic-assisted therapies as their last-ditch solution. Psychedelic therapy assisted by psilocybin, MDMA- and even ayahuasca or DMT ceremonies are helping veterans to begin a new journey in life.

“I was in a position when I was contemplating suicide… when I was not plugged into life and being in public was a nightmare,” says Wyly Gray, founder of Veterans of War, a nonprofit dedicated to preventing veteran suicide through the ethical, guided use of psychedelics to overcome trauma. Gray tells Truffle about his experience after returning from the War in Afghanistan in 2008, fighting against Al-Qaeda.

The nine-month-long deployment in Afghanistan changed Gray’s life. “I loved what I did till my final deployment. Until that point, I would’ve stayed in the Marines forever,” he says.

Sharing his experience,  Gray recalls the day when the number of confirmed kills for his artillery battery became more than the entire count of men in his platoon. While many men and women in the marines thrived in that environment, he says, “I wasn’t that kind of a person.”

After returning, Gray suffered from common hallmarks of post-traumatic stress such as overwhelming anxiety, insomnia, and nightmares. Coupled with other physical symptoms such as tinnitus, he had a poor quality of life. He started relying on anti-depressants heavily, alongside his regular visits to talk therapy and group therapy. He tried getting back in touch with his community through activism, helping plant trees, and renovating schools in underserved communities. Daytime activities did nothing to stem the sleepless nights. He needed a real solution.

“It took me seven years of trauma to figure out that I can do something to change it,” Gray tells Truffle Report.

Gray boarded a flight to Peru in sheer desperation in 2017, searching for a solution to his mental health issues. “I didn’t speak Spanish. I didn’t know what I was doing and in that way, I did everything wrong,” he says.

He was unprepared. However, even without definite knowledge, or integration techniques to deal with the challenges of a psychedelic journey, Gray had a wholesome, holistic experience that helped him come to terms with his traumas.

“The experience showed me a way to be of service to others again,” Gray says while sharing that his first experience was not enough. So, he went for another ayahuasca ceremony in Peru in mid-2019, and this time, with better knowledge of what he was stepping into. His second experience was an enlightening journey.

“I said to myself that this needs to be available to other people who are suffering from post-war traumas,” Gray said.

‘I Am Sick Of Burying My Friends’

It was easier to come to terms with his anxiety and PTSD after the second psychedelic experience in Peru. Now that Gray felt he was healing, he wanted to help his fellow Veterans in dealing with their traumas and starting their lives again.

Gray founded Veterans of War with the vision of assisting and preparing veterans in his community before their psychedelic journeys in Peru.

“We have a suicide epidemic in the veteran community. I am sick of burying my friends. If I had found out about this [psychedelic therapy] a decade ago, I wonder how many of my friends I wouldn’t have had to bury already. That’s the fight and that’s why I am in it,” Gray says while sharing his vision.

The suicide rate for Veterans ages 18–34 increased by 76 percent from 2005 to 2017, according to the U.S. Department of Veterans Affairs report. While the US government gave $27 million to the University of North Carolina School of Medicine to develop medicines from psychedelic drugs, the US military is eager to find solutions to this epidemic.

The Need for Change in our Cultural Relationship with Medicine

Expressing his dissatisfaction with present attitudes surrounding mental health medication, Gray says that the paradigm seems to function along the lines of “here’s a pill, take it for the rest of your life.” Gray is hopeful that society will eventually be able to change its current relationship with medicine and develop ethical standards to deal with mental health issues.

“With plant medicines and psychedelic therapy, as a general rule, it is interactive. The medicine is not only going to provide you service but also requires you to react. You’re an active part of your own healing,” Gray says.

With Oregon’s Measure 109 and 110 coming into effect, there are possible legal changes that can work in favour of Veterans of War. Still a matter of discussion, Gray is hoping to have a state-run care facility for veterans. Moreover, he is hoping to legally operate a Veterans of War psychedelic clinic in Oregon.

Veterans of War, like many veteran support entities, are dependent on donations for funding, and investors to make new therapeutic options viable. Expressing his gratitude toward one of the main investors, Gray says “Without Dr. Bronner’s investment in psychedelic therapy for Veterans, we wouldn’t have this unique opportunity to help veterans recover. They have really pushed us to be better versions of ourselves.”

Clearly, there’s a lot that can be done to help a section of society that willingly dedicates their lives to serving their country. In return for their valour and services, there is a need to provide a stable solution, which may possibly come from psychedelic medicines. “I think there’s an opportunity to create something and legalization in Oregon has definitely set a precedence that I hope other states will follow,” Gray says.