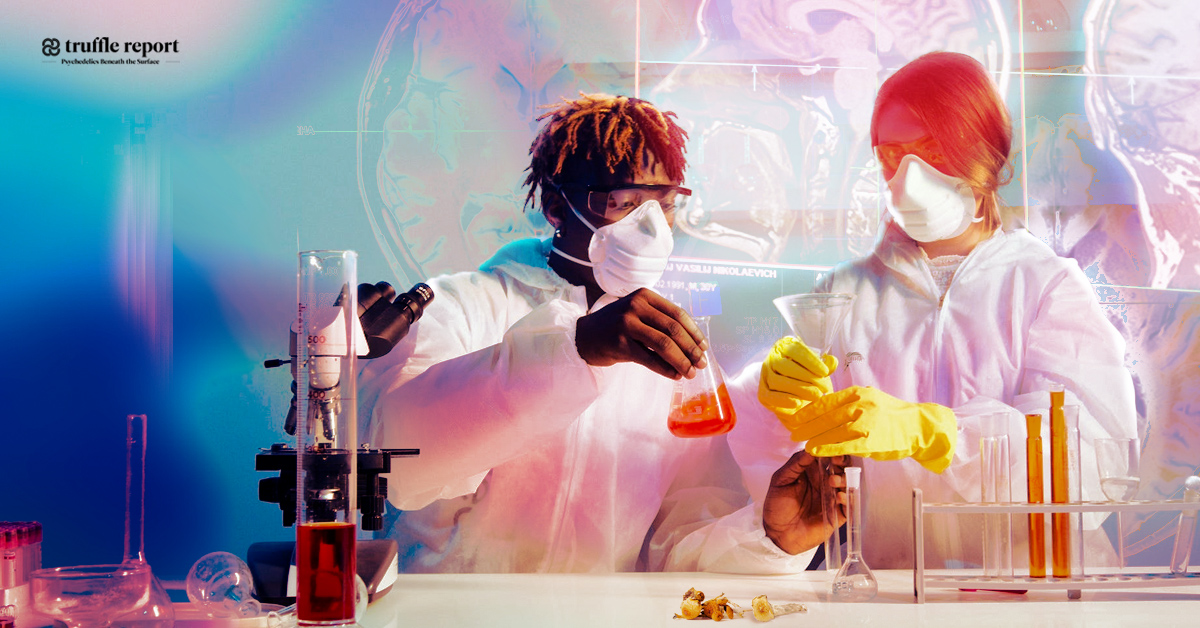 After decades underground, on the sidelines, or cloaked in protective anonymity, psychedelic researchers are establishing themselves once more at major academic institutions. All of this comes amidst a growing body of new clinical evidence into the therapeutic benefits of psychoactive controlled substances, and the anecdotal reports of benefits from a thriving community of psychedelic users. One exciting new effort exists at the University of California San Francisco, home to the Translational Psychedelic Research Program, whose acronym is TrPR, pronounced ‘tripper’. Truffle Report first became aware of Associate Professor and Program Director Joshua Woolley through a study on the impact of psilocybin on demoralization in long-term AIDS survivors.

Most of us will agree that the present day and age is a bad time for mental health. Conversely, this makes it a good time to be studying psychedelics, when the prospect of solutions from psychoactive compounds seems to be working inexorably to break down traditional stigmas. True to form, TrPR is focused on studying the potential of psychedelics to act on conditions that would otherwise serve as exclusion criteria for traditional clinical trials.

“At TrPR, we are running three clinical trials that are all focused on conditions that cause significant suffering but for which current treatments are inadequate,” Woolley begins. “One of these conditions is depression associated with bipolar II”.

“Bipolar II is a major problem,” he begins. “It affects half a percent of the world’s population and is a leading cause of disability, especially among young people. It is best thought of as a subgroup of bipolar disorders with a specific longitudinal pattern of illness severity. Bipolar II is not less severe compared to Bipolar I; as it is associated with higher rates of depressive and overall episodes, and higher rates of anxiety disorder comorbidity, rapid cycling course, and possibly greater risk of suicide attempts. The more frequent and longer lasting depressive episodes and subsyndromal depressive symptoms in bipolar 2 are particularly impairing. In bipolar illnesses, depressive symptoms are more disabling than hypomanic symptoms, and are potentially as — if not more — disabling than mania symptoms. Current treatments for bipolar depression are inadequate. SSRIs can sometimes make things worse in bipolar and they certainly don’t work that well for depressive symptoms. Antipsychotics and lithium are important components of our treatment approach for the illness, but none of them are sufficiently effective and they have significant side effects. If psilocybin can do for bipolar depression what it appears to do for unipolar depression, namely cause a dramatic and long-lasting improvement in symptoms after a single dose, that would be a big deal for patients suffering from this disease.”

Unfortunately, it is not quite that simple. “People have been reasonably nervous because the psilocybin experience mimics mania in a lot of ways,” Woolley explains. “We don’t understand the neural substrates of mania really, or what psilocybin does, but subjectively, people describe many overlapping things; such as feeling kind of grandiose and connected to the universe.”

“Obviously it’s not without risks,” he admits. “But clinical trials in the modern era have excluded people who have a history of bipolar. Typically even if they have a first degree relative, say a cousin with bipolar, they’re out. Therefore, we really don’t know yet how safe or risky it is to use in people with bipolar. I think the benefits are potentially very high, but the risks could also be significant. If you made someone manic who had never been manic before, that could theoretically be a really bad outcome. We have to be careful.”

Woolley likens the process to chemotherapy, “which”, he says, “is really dangerous, but dying from cancer is worse. One would never give chemotherapy for a common cold, we have to  balance these things. We recently wrote an article trying to summarize all of the published case reports of bad outcomes, in particular looking for cases where a psychedelic induced a persistent manic episode. We found very few case reports, only 17 for all psychedelics, not just psilocybin, and almost all of them involved other factors, for example using a psychedelic everyday for a month or simultaneously using other substances like cocaine or amphetamines, that likely contributed to the adverse outcome. We also conducted an international survey of people who self-identified as having bipolar who also reported using psilocybin or psilocybin-containing mushrooms. Data analysis is ongoing but over 500 people filled out the survey. We asked them questions about what happens when they use psychedelics. After that was a follow-up qualitative interview of a subset of the people to really get in-depth about their experiences. Our preliminary analyses are suggesting that, yes, sometimes people experience worsening of their bipolar symptoms after using a psychedelic, including worsening of depression or insomnia, or even mania. On the other hand, almost everyone in our survey reported that the psilocybin really benefited them. We are excited to see what the data shows and should be publishing the results in the next year.”

Psilocybin for Depression and Anxiety in Parkinson’s Patients

Equally intriguing is the idea of using psilocybin to treat depression and anxiety associated with a chronic neurodegenerative condition. Led by Associate Director Ellen Bradley MD, TrPR is conducting such a study in people who have depression and anxiety associated with Parkinson’s Disease. People living with Parkinson’s have been excluded from nearly all other psychedelic clinical trials.

“What many people don’t realize is that depression and anxiety are very common features of Parkinson’s Disease even before people have motor symptoms. The disease damages the dopaminergic circuit and causes atrophy that could dysregulate mood. Patients are also being diagnosed with this illness that’s progressive and currently not curable. The functional impairment, the fear, and the existential distress can understandably cause changes in mood. SSRIs and other traditional antidepressants don’t offer relief for many people with Parkinson’s Disease. We want to see if psilocybin therapy could be a viable alternative. Of course, there is risk involved. No one has done any studies giving a psychedelic to people with a neurodegenerative disease. And with Parkinson’s in particular, there is a risk that psilocybin therapy could exacerbate other symptoms of the disorder.”

Obviously, providing psychedelic therapy to people with Parkinson’s requires caution. “We have a lot of measures in place to minimize risk to our participants,” says Woolley. “With dose escalation protocols and a lot of oversight we hope that we can help people while managing the risks.” Woolley mentions that he sees these treatments going beyond simply Parkinson’s. “A lot of people will be diagnosed with illnesses that are progressive and not curable. It’s not just cancer. There’s a lot of depression associated with many chronic illnesses. You can think of them as all types of palliative care conditions. We are really excited about finding out if psychedelic therapy can be safe and effective for these conditions that have previously been exclusion criteria for other psychedelic trials.”

Psilocybin for Chronic Low Back Pain

In collaboration with fellow researchers at Stanford and Berkely, TrPR is also researching the potential impact of psilocybin therapy for chronic low back pain.

“We will be focusing on people with chronic back pain who have already tried but did not get better from multiple mainstream treatments including physical therapy and pain medications.” Woolley explains, “We’ve decided to focus on chronic low back pain because it’s the most common cause of chronic pain, and we wanted some homogeneity in our patient population. It turns out that a lot of the modern treatments for chronic pain are about changing your mindset. Obviously, one tries to decrease the source of the pain, perhaps through surgery or physical therapy, but for people for whom those things haven’t worked, a mainstay of treatment is psychological, helping people change their relationship to the pain. We believe that psilocybin therapy can help change the way they think about their pain similarly to how it has helped people cope with a life threatening cancer diagnosis. We also think that psilocybin may help normalize the abnormal neural circuitry that’s been set up and reinforced that likely underlies chronic pain. We hope to make people better able to do stuff in their life, even if their pain intensity hasn’t changed, although we’re hoping that their intensity will also change. That would be a home run.”

“Simultaneously,” says Woolley, TrPR has “relationships with multiple companies in this space. We are a site for the multi-site clinical trial of psilocybin for depression sponsored by the Usona Institute. We are also collaborating with Silo Pharma on an investigator-initiated study  examining the effects of psilocybin on various aspects of inflammation in the blood. There’s animal work suggesting that psychedelics can have anti-inflammatory effects. We’re investigating this in humans. We’re also working with Filament Health on a study of psilocybin versus ketamine as a treatment for depression, which we’re really excited about.”