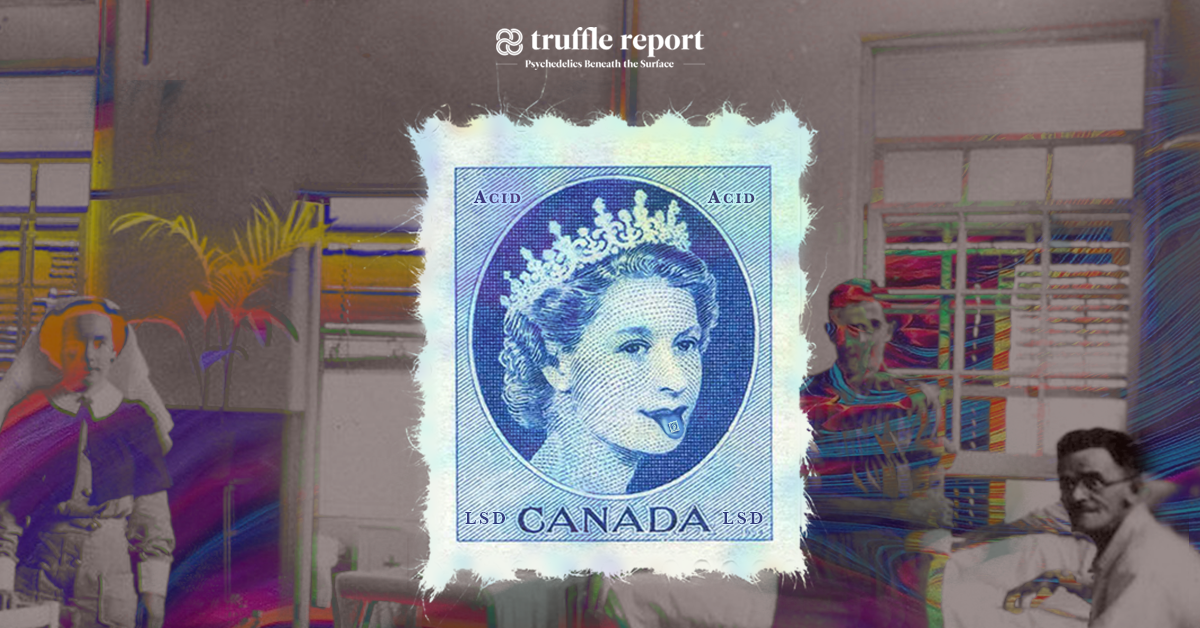 In the 1950s, the Saskatchewan Institution Was Home to Some of the Earliest Psychedelic Experiments

When you think about the roots of modern psychedelic research, chances are a familiar cast of now-infamous (and controversial) characters and settings come to mind.

Maybe it’s psychologist Timothy Leary’s Harvard Psilocybin Project, a series of experiments in the early 1960s that explored the potential of mushrooms to reform criminals, treat alcoholism, and provoke spiritual experiences. Or perhaps it’s MKULTRA, a secret project started in 1953 that ran for about 20 years, in which the CIA conducted experiments, sometimes on unwitting participants, to gauge the potential use of LSD and other psychedelics for mind control, information gathering, and even psychological torture.

But for people in Canada, the history of psychedelic research is much closer to home than you might think: In the heart of Saskatchewan, the now-demolished Weyburn Mental Hospital was the site of some of the world’s earliest psychedelic research. At the hospital, about an hour-and-a-half drive away from Regina, researchers conducted groundbreaking studies that examined whether LSD and mescaline could be leveraged to better understand mental illness or treat addiction.

The Road to Psychedelic Research at Weyburn

Before Weyburn became known for the novel psychedelic research taking place within its walls, the institution — opened in December 1921 as the Souris Valley Regional Care Centre, the largest building in the province at that time — was the site of experimental (and now largely outlawed) psychiatric treatments, including lobotomies, electroshock therapy, insulin therapy, and hydrotherapy. Despite an eventual capacity of 1,800 patients and staff, Weyburn was also notoriously overcrowded and admission was often considered a life sentence.

But in the 1940s, the wheels of the provincial political machine began to turn in a direction that would create the conditions for psychedelic research to take off at the hospital in the following decade. According to Erika Dyck, Canada Research Chair in the history of medicine at the University of Saskatchewan and author of Psychedelic Psychiatry: LSD from Clinic to Campus, the election of Tommy Douglas as premier in 1944 is key to understanding how the research came to be.

With the election of Douglas, who was Sasktachewan’s premier for the next 17 years, also came the continent’s first socialist government. While Douglas probably didn’t know much about psychedelics per se, Dyck said, the premier aimed to build an early system of publicly-funded health care and to foster an environment for researchers and scientific studies of all kinds.

“Psychedelics offered … a dynamic intervention,” said Dyck. “A one dose therapy (of psychedelics) offered a kind of economically feasible approach to potentially treating mental illness at a time when a government was investing in publicly funded health care.”

Enter, Humphry Osmond and Abram Hoffer, the two researchers who would go on to lead the psychedelic studies at Weyburn.

Osmond, who became clinical director and then superintendent of Weyburn, was a British psychiatrist who arrived in Saskatchewan in 1951. According to Dyck, Weyburn was disillusioned with the psychoanalytic direction the field of psychiatry was taking, centred around the unconscious, talk therapy, and repressed memories.

“Lying on a couch and talking to someone for 10 years might be really great, but it’s really inaccessible for most people, we don’t have enough resources, … and you may or may not actually get some kind of clarity,” said Dyck of Osmond’s rationale. Osmond saw this approach as being incompatible with treatments for more severe mental health issues such as schizophrenia, Dyck added.

Saskatchewan native Hoffer’s background was in agricultural biochemistry, but after medical school he became a researcher with the Psychiatric Services Branch of the provincial public health department in Regina. Hoffer “already had an interest in the kind of biochemical nature of disorders, and the biochemical relationship with dysfunctional behaviour,” said Dyck.

Hoffer met Osmond soon after he arrived in Saskatchewan, and the collaboration quickly took off.

Osmond and Hoffer developed a program with two goals: first, to give LSD to patients with alcoholism to try to treat their addiction, and second, to use LSD and mescaline to attempt to develop a model of disease for schizophrenia to inform treatment.

For their work on alcoholism, the duo would give patients what would be considered by today’s standards a single “massive dose” of LSD, always under medical supervision , and usually with a supervisor who had experienced psychedelics before. A fairly intense 8-10 hour period would follow, where the patient would go through intensive psychotherapy, followed by more psychotherapy and monitoring down the road.

Based on six month to two year follow-ups, the results were riveting. While other interventions at the same time usually showed success rates of about 30 per cent, Dyck said, the studies at Weyburn were claiming up to 90 percent success rates. While some screening measures were in place that may have boosted those numbers, such as safeguards to prevent people with a family history of schizophrenia and psychosis from entering trials, Dyck said the results were still “pretty astounding.”

Osmond and Hoffer’s work on developing a model of disease for schizophrenia took a slightly different direction, based on the pair’s belief that a trip could mirror the experience of psychosis. For these experiments, the duo would give LSD and mescaline mainly to Weyburn staff in order to study their trips, and enable them to better empathize with patients dealing with psychosis.

Kay Parley, a former psychiatric nurse at Weyburn and author of Inside “The Mental: Silence, Stigma, Psychiatry, and LSD,” was one of these participants. In her book, Parley vividly describes taking LSD under the direction of anthropologist Francis Huxley, nephew of Brave New World author Aldous Huxley, in 1958.

“I’ve heard the onset of the drug is sudden, but I couldn’t have imagined how sudden,” Parley writes. “One instant I am talking normally to Francis, and the next instant the lamp behind him is producing approximately the same amount of light as the sun.”

“No wonder people reported achieving insight when under LSD,” Parley writes. “I got a totally new impression of myself in that instant, and it was to strengthen me many times through the years. I, who had considered myself a weakling, was one of the strong ones. It was a revelation.”

Research at Weyburn Comes to a Close

While the research being conducted at Weyburn showed immense promise, it wasn’t immune to the challenges posed by changes in the province’s political system, a sweeping tide of negative cultural attitudes around psychedelics, and barriers posed by the legal system.

The tragedy sparked by thalidomide, a drug widely prescribed to pregnant women in the 1950s and ’60s to treat nausea that was later shown to cause irreversible fetus damage, also shook public trust in the scientific community’s capacity to determine the public health risks of certain substances, including LSD.

Internationally, the public began to associate substances like LSD with the counterculture. Psychedelics “become associated with reckless use or anti-status attitudes,” said Dyck, and were linked by the public to “a much more recreational, abusive side of drugs.”

Douglas resigned as premier in 1961 to lead the province’s New Democratic Party. The following year, Saskatchewan doctors went on strike over the medicare system. Osmond left Weyburn in 1961 for a job at Princeton University, closing the hospital’s psychedelic research chapter.

Almost 70 years later, things are starting to come full circle for the research into the use of psychedelics to treat addictions Osmond and Hoffer conducted at Weyburn. But in the spirit of the psychedelic renaissance sweeping Canada, today’s researchers are leveraging everything from LSD and psilocybin to MDMA and Ayahuasca to study their potential in treating a range of mental health issues. As a longtime historiographer of psychedelic research, Dyck said watching the current revival feels surreal.

While the psychedelic model of psychosis Osmond and Hoffer honed in on faces significant criticisms in current scientific literature, and the hypothesis may have been somewhat abandoned, Dyck said, there were other crucial takeaways from the study Parley recounted in her book.

Along with the research legacy of Weyburn, the coining of the term ‘psychedelic’ can be traced back to Osmond and the institution as well. Aldous Huxley reached out to Osmond in 1953 after hearing about his research, and that first letter eventually led to Osmond bringing Huxley and his wife Maria mescaline in Los Angeles. A friendship was formed and in a later letter, Osmond used the term psychedelic in a rhyme to Huxley: “To fathom Hell or go angelic / Just take a pinch of PSYCHEDELIC.” In 1957, Osmond used the term in a medical paper, introducing the word to the world.