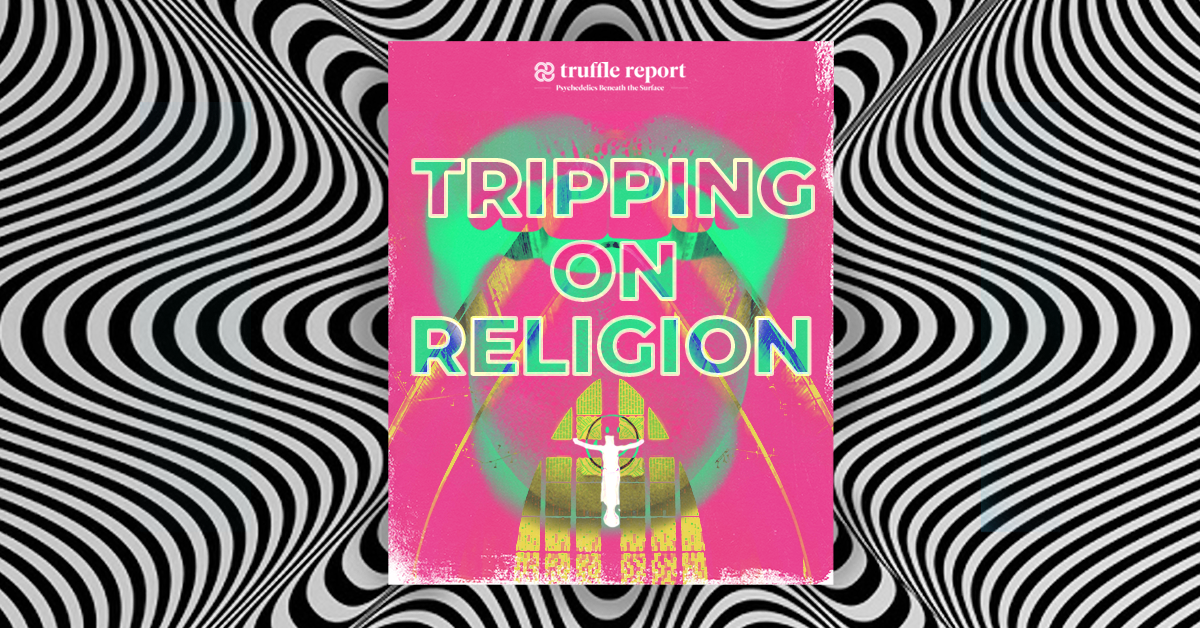 Tripping on Religion: Cults and Psychedelics

Cults are, once again, having a moment in our cultural consciousness. From Netflix’s documentary Wild Wild Country and FX’s American Horror Story: Cult to and trials of NXIVM members, cults excite and terrify us, and never fail to make headlines.

Cults are known for their ability to dictate what their followers think, and how they behave and feel. To be able to persuade and command obedience, cult leaders, much like the CIA, have tried to develop compelling conversion techniques to attract new members and keep their followers in line. Frequently, one of those methods of control was psychedelic drugs. Truffle Report looks into sects, drugs, and mind control.

What is a Cult?

The answer depends on who you ask. According Merriam-Webster’s dictionary, a cult is “an unorthodox or spurious religion with great devotion to a person, ideas, objects, movement or work.” In a 2018 interview with CBS, psychologist Steve Eichel of the International Cultic Studies Association (ICSA) said there are about 10,000 cults in the United States. A cult often has a charismatic leader who is a strong authority figure for the followers and exerts a powerful influence over the group members.

Public attention in the United States was fixated on the idea of cults in the 60s and 70s. Tens of thousands of young people started exploring alternative lifestyles and joining together in communes or cults at a vulnerable period in time. Many were seduced into thinking they had found enlightenment in the smaller circles of alternative religions. Some of these were harmless expressions of spirituality. Others were not.

At the same time, the cultural revolution involving psychedelic drugs was beginning, with the dismissal in 1963 of Timothy Leary and colleague Richard Alpert from the psychology department at Harvard for experimenting with LSD and psilocybin on student volunteers. The world now knew just enough about these mind-altering drugs to start being both intrigued and afraid.

Drugs have always played an important role in the history of religions and schools of spirituality. The ceremonial use of ayahuasca, peyote, and iboga evolved over centuries to bring the worshipper closer to supernatural forces. Clinical trials and studies of psychedelic drugs have shown that under certain conditions, these substances can bring about profound mystical experiences, change perceptions, and enhance suggestibility.

Probably the most infamous and sensationalized American cult, Charles Manson and his followers need little introduction. Manson had an undeniable hold over his family, and part of this attraction was due to LSD. His beliefs, and ability to convince his circle to act on them, resulted in the deaths of seven people over the course of two nights, including Hollywood star Sharon Tate, who was married to director Roman Polanski and pregnant at the time. Members of the cult were dosed before Manson’s speeches and, according to assistant district attorney Vincent Bugliosi, were “boot-licking slaves who were willing to do his killing for him.” According to former Manson Family member Dianne Lake, “LSD was given out like a sacrament.”

In 2019, Ton O’Neill’s new book Chaos: Charles Manson, the CIA and the Secret History of the Sixties, suggested a link between one of America’s most famous cult leaders and the government’s secretive mind-control program, MK-Ultra. The project, which lasted from 1953 until about 1973 was created by chemist Sidney Gottlieb to assess the potential use of LSD and other hallucinogenic drugs, including MDMA, mescaline, heroin, and psilocybin for “mind control, information gathering and psychological torture.” According to O’Neil’s book, Manson may have been used as a lab rat for trials that involved psychedelic drugs, as well as paralytic and electroshock therapy.

The Great White Brotherhood or The Family

The Manson Family was not the only cult family to shake the world. In 1960s Melbourne, Anne Hamilton-Byrne —a fashionable yoga teacher— began a cult claiming to be Jesus Christ reborn as a woman. Over the years she collected 28 children through adoption scams and “gifts” from followers, dressing them in identical clothes and bleaching their hair blonde. To keep the kids under control, she implemented a regimen of beating, starvation, and emotional torture. Once the children turned 14, they were forced to consume huge doses of LSD for stretches of a week at a time.

“There was only one rule: do absolutely everything she said,” says David Whitaker, a survivor. “That included what to think, what to wear, what to eat, who to marry, who not to marry. Total obedience.”

One of Hamilton-Byrne’s associates was Howard Whitaker, a psychiatrist and researcher in the use of psychedelics to treat mental illnesses. He is believed to have brought drugs to the group. According to a 2017 report from The Guardian, Hamilton-Byrne supposedly kept a jar full of LSD at her home and “would personally guide her followers through their trips, ensuring their acceptance of her divinity.”

Antares From the Light

This Peruvian Cult was formed by Ramon Gustavo Castillo Gaete in 2005, who told his followers that he was a god and believed that the world would end on December 21, 2012. Members of the cult apparently consumed ayahuasca, a hallucinogenic plant brew, during their rituals. The cult made headlines when during the ritual, a baby was thrown into a bonfire because the members believed the child was the anti-Christ.

“The baby was naked. They strapped tape around her mouth to keep her from screaming,” said Miguel Ampuero of the Chilean Investigative Police (PDI). “Then they placed her on a board. After calling on the spirits, they threw her on the bonfire alive.”

This Japanese doomsday cult, whose name means “supreme truth,” was formed in the late 80s. The group mixed Hindu and Buddhist beliefs, later incorporating elements of Christianity and the concept of Armageddon. The group made headlines in 1995 when members carried an attack on the Tokyo subway system. The cult was formed by the pharmacist Chizuo Matumoto, who would later take the name Shoko Asahara, and was at first dedicated to meditation and yoga. However, Asahara believed both that he was the most enlightened being since Buddha and Christ, and that the end of the world was near. The members of the group were fed LSD to keep them easily manipulated and to invoke visions in support of Asahara’s influence on them.

The Peoples Temple of the Disciple of Christ

A religious movement founded with progressive visions of reducing systemic inequities and breaking racial barriers, Jim Jones’ house of worship would end up taking the lives of more than 900 followers. In 1978, Jones ordered the population of his remote compound in Guyana to drink Flavor Aid containing cyanide, with several followers tasked to murder U.S. Congressman Leo Ryan, among others with him. According to Jeff Guinn’s book The Road to Jonestown: Jim Jones and the Peoples Temple, Jones had been abusing drugs, including amphetamines and tranquilizers, since the early 1970s, which contributed to his paranoia. According to a New York Times report, the cult was stocked with thousands of doses of drugs that “promoted suicidal tendencies, could cause hallucinations, blurred vision, confusion, speech disturbances, involuntary movements and emotional euphoria and depression.”

“Those are absolutely hard‐line, hardcore drugs,” Dale Parks, a nursing supervisor at Jonestown, said when reading a partial inventory. “There’s no way that many people were receiving treatment. I know they were using things to keep people under control, but not like this.”