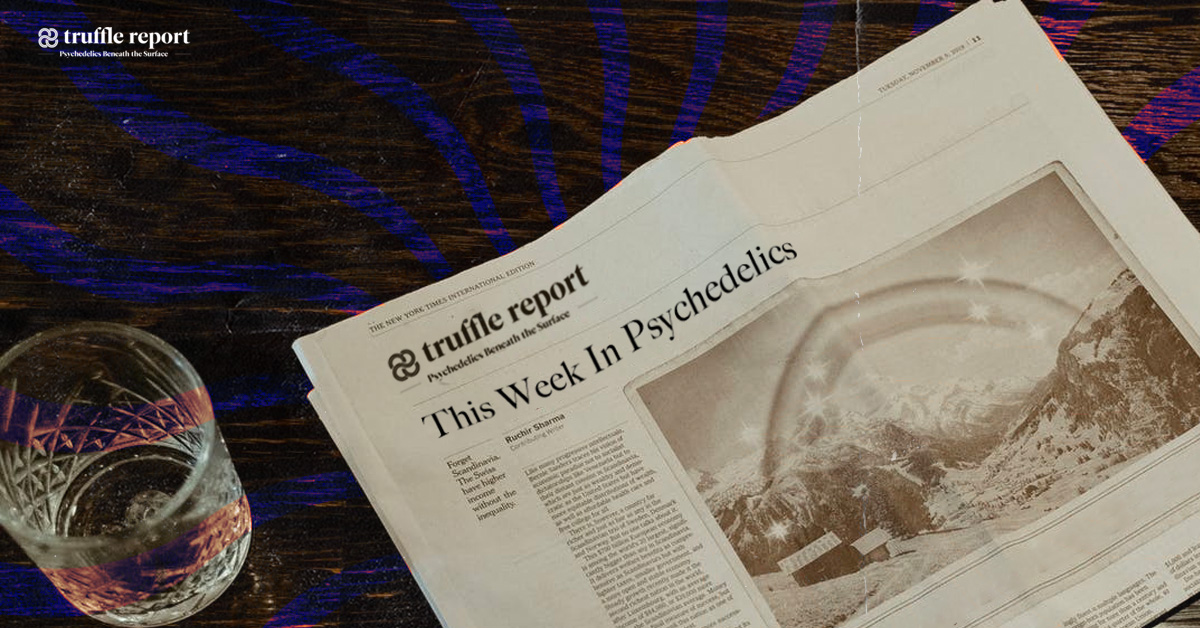 Truffle Report has compiled a roundup of major psychedelic business news stories from November 29 to December 3, making it easier for you to access these insights in one place. We’ve already discussed this week’s big news for MindMed and Cybin. Here’s a recap of a few other highlights.

The Multidisciplinary Association for Psychedelic Studies, or MAPS, announced on Thursday. the creation of a novel funding mechanism, or Special Purpose Vehicle, to secure funding for clinical access and infrastructure around MDMA-assisted psychotherapy. The move was made in partnership with psychedelic venture capital firm Vine Ventures.

“MAPS is the most important organization for the success of psychedelic therapies globally,” explained Vine Ventures founder and managing director Ryan Zurrer. “Vine has demonstrated a commitment to rethinking venture capital with our own reciprocity pledge, and we’ve been honored to work with MAPS to create this novel funding  structure that empowers them to deliver on their mission of mass mental health. Getting MAPS out ahead of the industry will create a commercial and cultural bar that puts patient access first.”

RLH reported a 56% increase in the number of stores carrying its iMicrodose product, now totalling 39 in the Netherlands. They also reported revenues of $485,738 for the three months ended September 30, 2021, of which $156,970 was gross profit. As of EOQ, the company held $29.1 million in cash.

Wesana reported ending the third quarter with US$11,266,187 in cash. Other achievements announced for Q3 of 2021 included the company’s inclusion as a component of the AdvisorShares Psychedelics ETF, and acquisition of PsyTech.

Numinus Wellness announced on Monday that it has developed new, proprietary methods for screening compounds in its psilocybe mushrooms.

Numinus hopes that the toxicity and potency scans will be available as an offering for third-party clients, and assist in moving scheduled mushroom products through regulatory frameworks.

“The testing we’ve developed and validated at Numinus Bioscience will facilitate the safety and efficacy testing of psychedelics for our products, our clients and strategic partners, and ultimately the industry,” says Sharan Sidhu, Science Officer and General Manager. “Working with regulators, we look forward to establishing tools to create a stronger foundation of analytical methods for psychedelic compounds and products.”

Vancouver-based Albert Labs announced on Monday that it had received conditional approval to list its common shares on the Canadian Securities Exchange, or CSE. The CSE has provided a jumping off point for access to investor capital for many smaller-cap psychedelics companies since the industry’s inception.

“Conditional approval on the Canadian Securities Exchange represents a significant milestone for Albert Labs as we gear up to become a public company”, said Dr Michael Raymont, the Chief Executive Officer of Albert Labs. “Listing on the CSE will enable us to attract additional capital and enhance our market profile, which in turn will catalyse our growth toward becoming a worldwide leader and provider of accelerated access to psychotherapeutic medicines and therapies”.