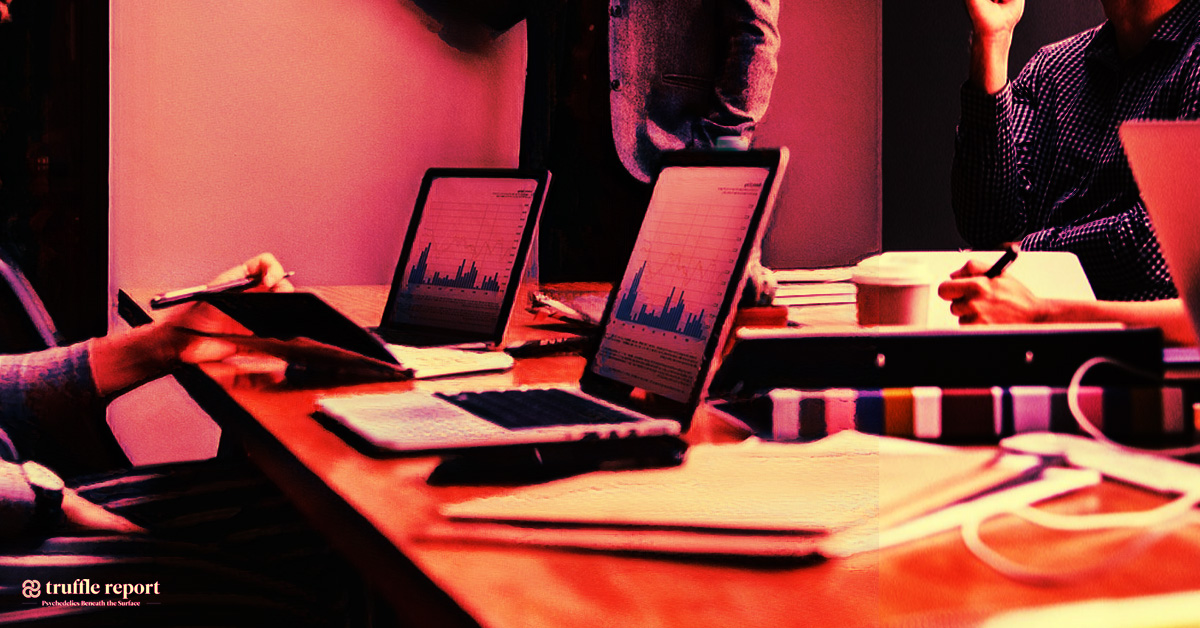 Truffle Report has compiled a roundup of the major psychedelic business news from November 8-12, making it easier for you to access these insights in one place.

Psychedelic mental health company COMPASS Pathways announced on Tuesday the results of its Phase IIb clinical trial for treatment resistant depression using psilocybin-assisted psychotherapy. Investigational doses of either 1 mg, 10 mg, or 25 mg of COMPASS’ COMP360 psilocybin were given to 233 patients, with most responding well, though 12 reported serious adverse effects. 209 patients completed the study overall, with most withdrawals occurring from the 1 mg and 10 mg groups.

Overall responses were promising, with significant reported reductions in depression symptoms. Phase III of the trial is expected to begin in 2022.

Toronto-based psychedelic biotech and drug development firm Cybin Inc. announced on Monday that its preclinical findings indicate significant advantages for CYB003, its proprietary deuterated psilocybin analog, over oral psilocybin administration. Cybin is tailoring its compounds with a focus on major depressive disorder and alcohol use disorder.

“Multiple academic studies have shown that psilocybin may have the potential to revolutionize mental healthcare, but few companies have addressed the well-known limitations and side effects of oral psilocybin. Cybin has always strived to develop safer and more effective therapies for patients, which has guided our multiple psilocybin programs: CYB001, CYB002, and CYB003,” said Doug Drysdale, Cybin’s Chief Executive Officer.

On Wednesday, psychedelic clinical provider Novamind announced that it had obtained approval from four additional major insurance providers to cover direct-billing of its ketamine-infusion treatments. These include Blue Cross Blue Shield, the University of Utah, PEHP Health & Benefits, and MBA Benefit Administrators.

Ketamine-infusions are among a number of psychedelic or adjacent treatments gaining traction for use against treatment-resistant depression as an adjunct to psychotherapy. Many insurance providers already cover psychotherapy or other psychiatric services. Novamind also operates a call center specializing in insurance verification for those pursuing ketamine infusion treatments.

“This initial success with insurance coverage of ketamine is promising for the future of psychiatry because it sends a strong signal that payers are interested in more effective treatments for mental health conditions as supporting research emerges,” said Dr. Reid Robison, Novamind’s Chief Medical Officer.

Numinus Wellness announced on Wednesday that it had secured clinical facilities in both Vancouver and Montreal in order to host and facilitate the latest iteration of MAPS Public Benefit Corporation’s multi-site study of MDMA for the treatment of severe PTSD. Numinus will be providing financial and logistical support at the two new Health Canada-compliant clinics.

“We are honored to host the Canadian sites of the MAPPUSX trial as we continue to examine the important findings around MDMA-assisted therapy for PTSD,” said Dr. Joe Flanders, VP, Psychology, Numinus and therapist for the Montreal site of the trial. “Our clinical and research teams are well positioned to implement MAPS’ research and, ultimately, to work with MAPS on the translation of research findings into mainstream clinical practice. We are excited about this study in both BC and Quebec and look forward to how the MAPPUSX study supports expanded collaboration in the future.”