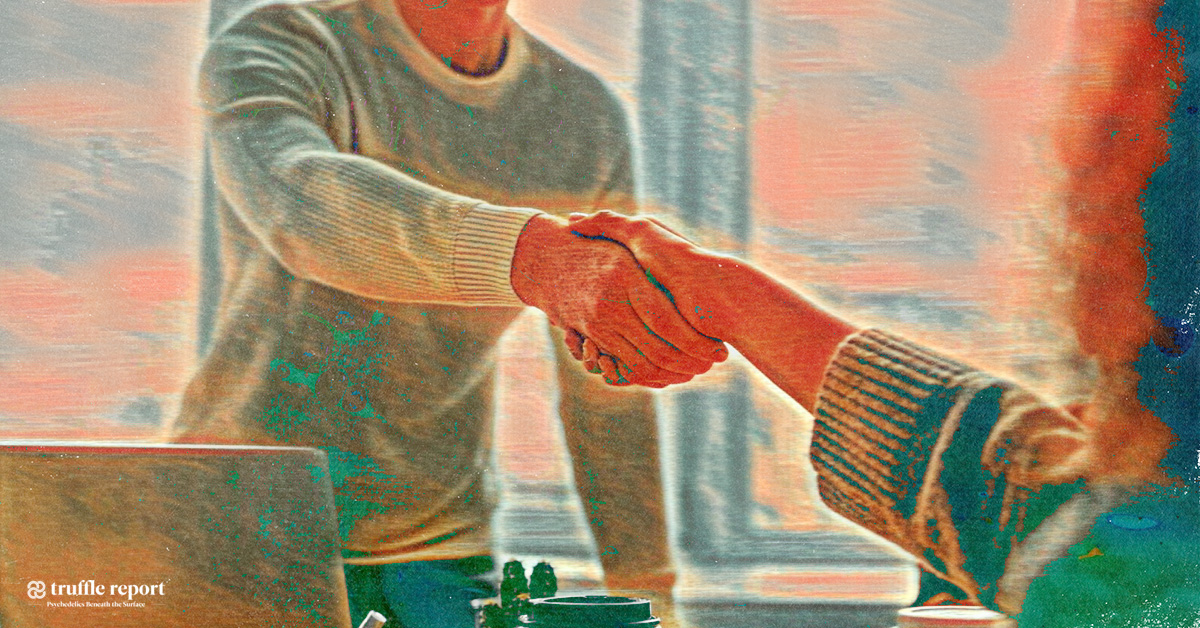 Truffle Report has compiled a roundup of the major psychedelic business news from November 1-5, making it easier for you to access these insights in one place.

COMPASS Pathways has announced that it will launch the second phase of its COMP360 therapy trial, targeting PTSD with the therapeutic use of psilocybin. The study will take place at King’s College, London, with an initial enrollment of 20 participants.

George Goldsmith, CEO and co-founder of COMPASS Pathways, commented that, “We have made great progress in developing COMP360 psilocybin therapy for patients suffering with treatment-resistant depression, and are pleased to be able to expand development into the indication of PTSD, another area of significant unmet need. As many as one in 20 people in the UK suffer with PTSD and up to 40 percent of those are not helped by existing treatments. This is an urgent problem and we are determined to do what we can to transform mental health care and bring new, evidence-based therapies to those who so desperately need them.”

Cybin Inc. announced on Thursday that it had been granted a Schedule I manufacturing license from the United States Drug Enforcement Administration. The license for the production and manufacturing of Schedule I controlled substances was granted for a facility in Boston, and will increase Cybin’s existing in-house R&D capacity.

“We are pleased with the progression of our clinical and regulatory efforts since the Company’s formation. This new license further positions the Company as a truly integrated biopharmaceutical company that can continue to work towards progressing Psychedelics to Therapeutics,” commented Doug Drysdale, Cybin’s Chief Executive Officer.

Vancouver-based drug discovery company Filament Health announced in a press release on Tuesday that it had been granted authorization to initiate the first FDA-approved clinical trial of naturally-sourced psychedelic substances, as well as the first direct administration of psilocin.

Psilocybin, the primary active compound in magic mushrooms, is in fact a prodrug, meaning it is metabolized to become psilocin in the body.

Another Psychedelics Company on the Nasdaq

Bright Minds Biosciences, based out of Vancouver, British Columbia, announced on Wednesday that it has become the latest publicly traded psychedelics company to receive approval to list on the Nasdaq. Shares of the company, previously available on the Canadian Securities Exchange, will be listed on the NASDAQ under the ticker ‘DRUG’ beginning November 8. Bright Minds is a biotech company working to develop novel psychedelic compounds to address neuropsychiatric and pain disorders.

“Our listing on Nasdaq marks an important corporate milestone for Bright Minds, as we continue to advance our innovative drug candidates in pursuit of an improved generation of targeted serotonin-based therapies,” stated Ian McDonald, CEO and Co-founder of Bright Minds Biosciences. “With encouraging preclinical data across several indications, we are progressing toward first-in-human trials with our lead drug candidate, BMB-101, for the treatment of Dravet syndrome, a devastating congenital and genetic disease affecting the nervous system. We expect to commence the trials in the first half of 2022.”