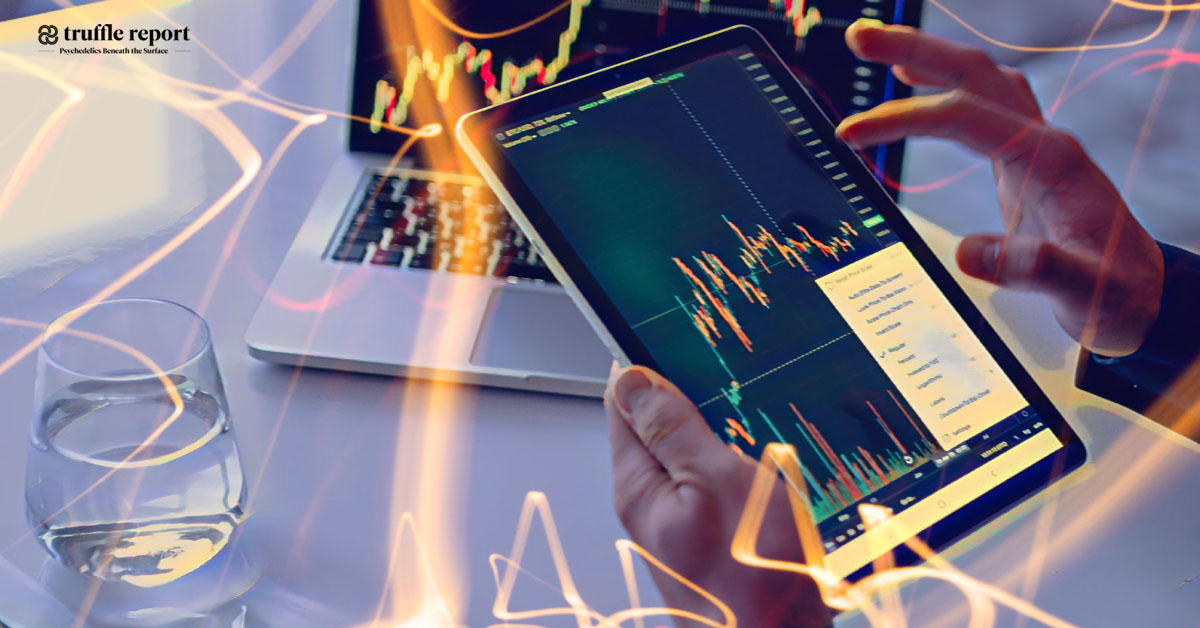 Truffle Report has compiled a roundup of major psychedelic business news stories from December 13-17, making it easier for you to access these insights in one place.

On Monday, COMPASS Pathways announced the positive outcome of a study of psilocybin therapy as an adjunct to SSRI treatments for depression. The question of the safety and tolerability of this common class of antidepressant alongside psychedelic therapy is a critical hurdle for the industry to overcome, and which COMPASS is not alone in recently seeking to address.

The trial was small, with 19 patients each consuming a single dose of 25mg of COMP360 — COMPASS’ proprietary psilocybin.

“The results of this study challenge the widely-held belief that the use of SSRI medication together with psilocybin could interfere with psilocybin’s therapeutic effect. Our findings provide a strong signal that COMP360 psilocybin therapy could be an adjunctive treatment to SSRI antidepressants as well as a monotherapy. For some patients with treatment-resistant depression, withdrawal is a difficult step even though, by definition, ‘treatment-resistant’ means that those antidepressants are not working. This is exactly why we conduct rigorous research to help guide our clinical trial design – including addressing barriers to adoption of COMP360 therapy,” stated Guy Goodwin, COMPASS Pathways’ Chief Medical Officer. “We are now looking forward to meeting with the FDA early in the new year in light of these new data to finalise our plans for the phase III programme, which we expect to begin in Q3 2022.”

On Tuesday, Numinus Wellness Inc. announced that it would commence trading on the Toronto Stock Exchange. On Thursday, December 16, Founder and CEO Peyton Nyquvest opened the market as Numinus’ shares began trading on the TSX under the ticker NUMI.

On Friday morning, MindMed announced that it was initiating a Phase 2a proof-of-concept trial of LSD in adult patients with attention deficit hyperactivity disorder, or ADHD. The trial will be conducted in collaboration with both Maastricht University in the Netherlands and University Hospital Basel in Switzerland. The first site for the trial is active, and is preparing to administer and test the utility of low doses of therapeutic LSD in the target population.

“We are pleased to activate our first site and excited to initiate patient enrollment of our ADHD proof-of-concept trial,” said Robert Barrow, Chief Executive Officer and Director of MindMed. “The study builds on the growing evidence demonstrating LSD has the potential to improve mood and selective cognitive processes. Further, low doses of LSD have been shown to be safe, well tolerated and have minimal effects on physiological parameters. In collaboration with our renowned clinical researchers and team of leading investigators, we look forward to driving this exploratory trial forward as part of our broader comprehensive LSD clinical development strategy.”

Cybin announced on Wednesday that it had received a notice of allowance from the United States Patent and Trademark Office related to CYB004, an investigational deuterated psychedelic tryptamine compound for the potential treatment of anxiety disorders. The allowed claims include other forms of deuterated psychedelic tryptamine, notably certain deuterated forms of DMT and  5-MeO-DMT. The patent, which is expected to expire in 2041 before consideration of any patent term extensions, covers composition of matter for the CYB004 drug substance as a putative new chemical entity.

“The receipt of this Notice of Allowance from the USPTO represents an important milestone in expanding our intellectual property portfolio progressing psychedelics to therapeutics for the countless patients in need, and strongly demonstrates the Company’s dedication to the discovery and development of differentiated psychedelic-based compounds for addressing mental health,” said Doug Drysdale, Chief Executive Officer of Cybin. “Once issued, this patent may have the opportunity to cover a broad range of claims supporting our IP in psychedelic medicine and further strengthen our emerging best-in-class position in this evolving industry.”

Following up on its successful export of psilocybin to Canada last month, Havn Life Sciences has announced that it has successfully exported research psilocybin from its Jamaican facility to the United States. The shipment was received by Mycrodose Therapeutics, Havn Life’s California supply partner, for which the United States Drug Enforcement Administration had previously granted an import license.

“With their track-record of working with the U.S. Food and Drug Administration, a proven track record of core business fundamentals, and registration with the DEA, Mycrodose Therapeutics is an ideal supply partner for HAVN Life,” says CEO Tim Moore. “Having a supply partner that gives us access to the rapidly growing U.S. market for research purposes is absolutely key for us as we look to expand our business in 2022,” he adds.