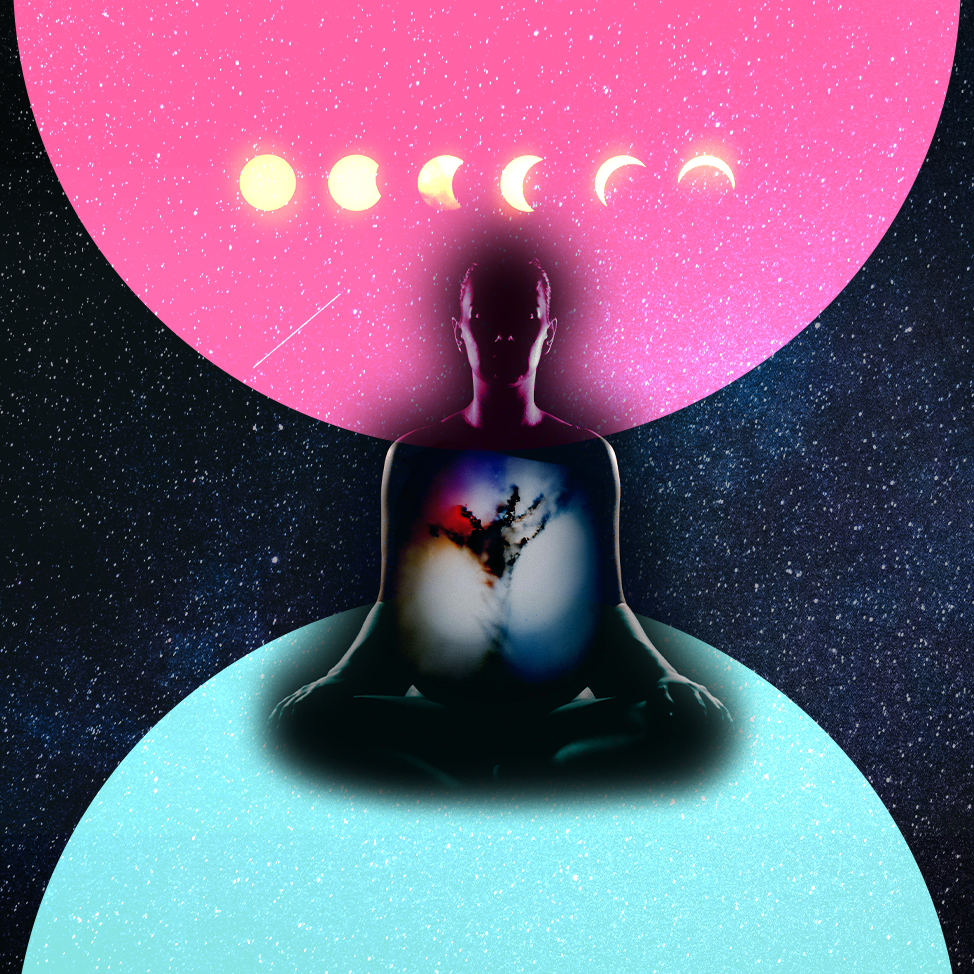 The Psychedelic Origins of Yoga and Soma

Yoga, an ancient practice of  mental clarity and meditation, has become increasingly popular for many people wanting to calm down their busy lives and distressed minds. The beauty of yoga is its versatility, that it can be practiced almost anywhere by anyone. For modern Americans, yoga became a lifestyle rather than spiritual practice. Yoga studios and meditation are far more popular as a part of daily life in Northern America than in India. While wellness influencers on various social media platforms have cultivated physical benefits of yoga for a long time, the real meaning behind the practice is often overlooked. Yoga is more than physical strength and flexibility; it is the spiritual development of the mind and body to unfold the higher consciousness. Sound familiar? We thought so too.

Yoga and psychedelics were often viewed as going hand-in-hand, since they aim to produce the same effects for mental health and spiritual growth. A 1965 article by Bob Simmons in The San Francisco Oracle suggested that the practice of yoga and the use of hallucinogenic substances have ‘different means, same end’. In his article, Simmons, a yoga practitioner, compared reaching higher consciousness by taking acid and through practicing yoga. The results were pretty similar.

Could the development of yoga be a result of psychedelic sacred plants and herbs used in the ceremonies? It is believed that this spiritual and religious practice formed due to a mysterious and sacred drink, soma. This drink could induce trance-like states, apparently connecting Vedic practitioners with their inner selves and the gods. Before going deep into the psychedelic origins of yoga and soma drink, let’s take a look at when and how it appeared in the West.

The Origins of Yoga in the United States: Brief History

The word yoga was first mentioned in an ancient Vedic Sanskrit text, the Rig Veda. The Vedas, a collection of songs, mantras and rituals, were used by Brahmins, or Vedic priests, to teach self-knowledge and inner wisdom.

In 1893, a Hindu monk from Calcutta, Swami Vivekananda, brought yoga to America. He introduced and advertised India, Hinduism, and yoga to a number of Americans in Chicago at the World Parliament of Religions.

In 1920, a student of Vivekananda, Paramahansa Yogananda addressed the International Congress of Religious Liberals, in Boston. His book Autobiography of a Yogi remains popular to this day. However, in 1924 there was a restrictive law in America that put a limit on Indian immigration to the United States. Because Easterners couldn’t travel to America, Americans were forced to travel to the East for yogic teachings.

Arguably responsibly for bring yoga to mainstream TV audiences is Richard Hittleman. Upon his return from India in 1950, he started teaching yoga in New York with an emphasis on its physical benefits. While many people started practicing yoga for fitness, a few began focusing on its mental possibilities.

Yoga’s rise is closely related to the 1950s and 1960s psychedelic boom. Hallucinogenic drugs were a huge part of the era and seemed like the next big thing in psychiatry and self-awareness. Many researchers studied hallucinogenic drugs and their benefits for the mind and body. Aldous Huxley, an English author, liked to experiment with psychedelic substances and was the one who claimed that the drugs and yoga were ‘devices for altering the chemistry of the body’.

In 1965, the United States removed the 1924 regulations on Indian immigration, which resulted in a new wave of immigrants, along with spiritual traditions. By the 1980s and 1990s, yoga had become culturally appropriated and assimilated into a fact of life for many Americans. Thanks to the rise of the fitness and technology industries, yoga was in every home, first on VHS, later on DVD, and now on every social media platform.

Soma: The Nectar of the Gods

We have drunk Soma and become immortal;
We have attained the light, the Gods discovered.
Now what harm may foeman’s malice do to harm us?
What, O immortal, mortal man’s deception?

The Vedic sutras and Ayurvedic texts mention a sacred drink called soma. The word first appeared around 3,500 years ago in Indian texts, praising the psychedelically induced states of the drink. Soma, a sacred drink made from unknown plants, was believed to alter consciousness, give spiritual insight, and boost health and strength. The drink, described in the Rig Veda, was also called “Amrita” or “nectar of the Gods,” and was an important offering at the Vedic sacrifices.

In the Vedas and the Avesta, soma is described as a plant, the pressed extract of a plant, and also as a God. All of the 114 hymns of the ninth chapter in Rig Veda are dedicated to soma.

The preparation of soma involved crushing the stalks of a plant to extract the juice, which is similar to the preparation of ayahuasca. The juice was often mixed with water or milk. As described in the Vedas and Avesta, the drink is yellow, brown, golden or reddish, and the plant has no flowers or leaves. The drink was offered as a sacrifice to the gods. The remainder was consumed by Vedic priests three times a day, morning, noon, and evening. Soma was both a healing and spiritual medicine and was believed to connect the minds with the higher world of gods and ancestors.

The plant was generally assumed to be hallucinogenic due to speaking about a feeling of immortality and extended consciousness, however, the only evidence was in the Rig Veda. Given its mysterious nature, many different forms and theories into the provenance of soma have surfaced over the years.

The first popular modern theory on soma came from R. Gordon Wasson, the banker and mycologist who also blunderingly brought knowledge of psilocybin mushrooms from Mexico to the mainstream media via a 1957 Life Magazine article. In 1967 Wasson published a book called Soma: Divine Mushroom of Immortality where he suggested that soma might be the mushroom Amanita muscaria or fly-agaric. His theory sparked a new interest in the cryptic plant. However, many believed that his book omitted textual references that would conflict with his view.

The book Food of the Gods by author, lecturer, and ethnobotanist Terence Mckenna, suggested that Stropharia cubensis, a hallucinogenic mushroom that grows in cow dung, could be soma. McKenna describes both his and Wasson’s experience using Amanita muscaria to reach a psychedelic state. However, their attempts were unsuccessful and didn’t induce a pleasant experience. McKenna decided that the description of the soma state in Rig Veda was not the same as under fly-agaric.

Another popular theory suggests that soma might be cannabis. The cannabis plant has a great medicinal value, produces mild visual hallucinatory effects, and grows in the region where soma is believed to be consumed. Critics of this theory are quick to point out that cannabis was already well known to ancient peoples before soma.

According to a theory by Dr. Matthew Clark, an independent researcher and Research Associate at SOAS (University of London), soma could be a combination of plants that work similarly to Amazonian brew ayahuasca. Clark stresses both that the preparation of soma as described in the Vedas is similar to ayahuasca preparation, and that there are similarities between ancient Vedic rituals and ayahuasca rituals. He adds that soma is referred to as purgative similar to ayahuasca.

Yoga Resulted From a Lack of Psychedelic Mushrooms

In her somewhat controversial book The Hindus: An Alternative History, Indologist Wendy Doniger suggests that early Vedic Indians lived in the mountains where there were plenty of psychedelic mushrooms. However, when their society moved into early civilizations around the Ganges, soma disappeared and was replaced by kriyas, a specific set of deep-breathing exercises. These exercises are believed to be the origins of yoga. Without mushrooms, people started changing the mind, body, and spirit by creating intense breathing exercises to illicit physiological and psychological responses. Today, kriyas are practiced by Kundalini yogis.