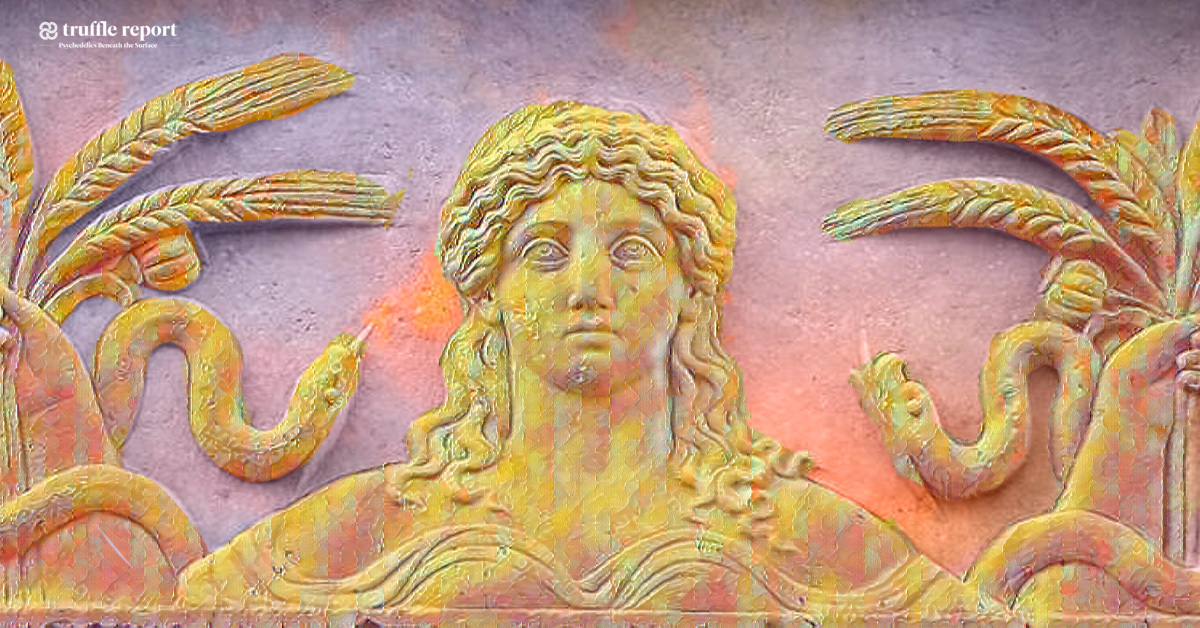 Psychedelic plants have been used by various cultures for centuries, for everything from spiritual and religious to medicinal and nutritional purposes. Kykeon, from the Greek “to stir” or “to mix,” was a psychoactive beverage of different plant varieties used in medicinal and spiritual rituals, and remains an enduring mystery of classical antiquity. Truffle Report looks into Kykeon, the city and temples of Eleusis, and the possible ceremonial use of psychedelics in ancient Greece.

Descriptions of kykeon can be found in many Greek writings: in the Homeric Iliad, it is described as a drink consisting of barley, water, herbs, and grated goat’s milk cheese which was used to nourish Nestor’s tired friends and help wounded Machaon. In the Odyssey, Circe the witch mixed a kykeon potion of various herbs and honey for Odysseus and his companions. According to the story, the drink transformed Odysseus’s companions into pigs. In the Hymn to Demeter, the goddess refused red wine but accepted kykeon, a drink made of barley, water and pennyroyal (a Mediterranean mint).

It is believed that the drink was popular due to its psychoactive elements, which induced hallucinogenic visions and altered consciousness, but that it also had digestive properties. In Aristophanes’ Peace, Hermes recommended kykeon to the hero who ate too many nuts and dried fruits. In Theophrastus’ Characters, kykeon was a peasant’s alcoholic drink.

Kykeon is most famous for its use in the Rites of Demeter at the city of Eleusis in ancient Greece, where it was consumed ceremonially to experience the mystery of death and rebirth. Kykeon was believed to be a secret potion able to initiate psychic changes in a chosen few. The Eleusinian Mysteries were celebrated every fall in the sanctuary of the cult of Demeter and Persephone. The celebration was to commemorate Persephone’s return from Hades, the renewal of life, and the rebirth of nature.

Theories of a Psychedelic Mixture

There are many theories about the drink being hallucinogenic in nature, and about how these effects may have been achieved.

In The Road to Eleusis, R. Gordon Wasson, Albert Hofmann, and Carl A. P. Ruck suggested that kykeon was mixed with the ergot species Claviceps purpurea — a fungus containing psychedelic alkaloids similar to LSD. Hofmann also proposed an alternative theory that kykeon might have been prepared from another species of ergot, Claviceps paspali, which did not grow on barley, but rather the wild grass Paspalum distichum.

The ergot hypothesis is based on the following explanation of Hofmann’s: “Within the kinds of ergot produced by the various species of the genus Claviceps and its many hosts, cereals and wild grasses, types of ergot do exist that contain hallucinogenic alkaloids, the same alkaloids as in the Mexican hallucinogenic morning glories. These alkaloids, mainly lysergic acid amide, lysergic acid hydroxyethyl amide, and ergonovine, are soluble in water, in contrast to the non-hallucinogenic medicinally useful alkaloids of the ergotamine and ergotoxine type. With the techniques and equipment available in antiquity, it was, therefore, easy to prepare a hallucinogenic extract from suitable kinds of ergot.”

It is believed that ergot was collected from cereals and paspalum grasses, ground, and then added to the kykeon by Eleusian priests. Beverages contaminated with ergot would then hold psychoactive properties and trigger intense hallucinogenic experiences.

R. Gordon Wasson and Robert Graves believed that the hallucinogenic beverage contained mushrooms. Wasson wrote about similarities between descriptions of kykeon and the Mexican rite of the velada based around psilocybin, and believed that the secret to Eleusinian mysteries lay in indoles, which are organic compounds that contribute to the potency of many psychoactive plants. Graves, on the other hand, was more confident in the fly agaric or Amanita muscaria hypothesis, although he also thought that the mushroom Panaeolus papilionaceus may have been contained in the kykeon potion.

Another theory popularized by Terence Mckenna supports Wasson/Graves’s theories and suggests that psilocybin-containing mushrooms may have been integrated into the kykeon drink.

There is also a theory that the primary psychedelic agent in kykeon was DMT, which can be found in many wild plants of the Mediterranean, including Acacia and Phalaris.

In 2000, Peter Webster, Daniel Perrine, and Carl Ruck, in the article Mixing the Kykeon, suggested that the real secret of the Eleusinian Mysteries wasn’t the secret active ingredient, but rather how it was prepared or processed.

While we may never know which, if any, hallucinogenic ingredients kykeon contained, we can be fairly certain that it held incredible importance for those ancient Greeks looking to feel closer to their gods, and to better comprehend the mysteries of life and death.