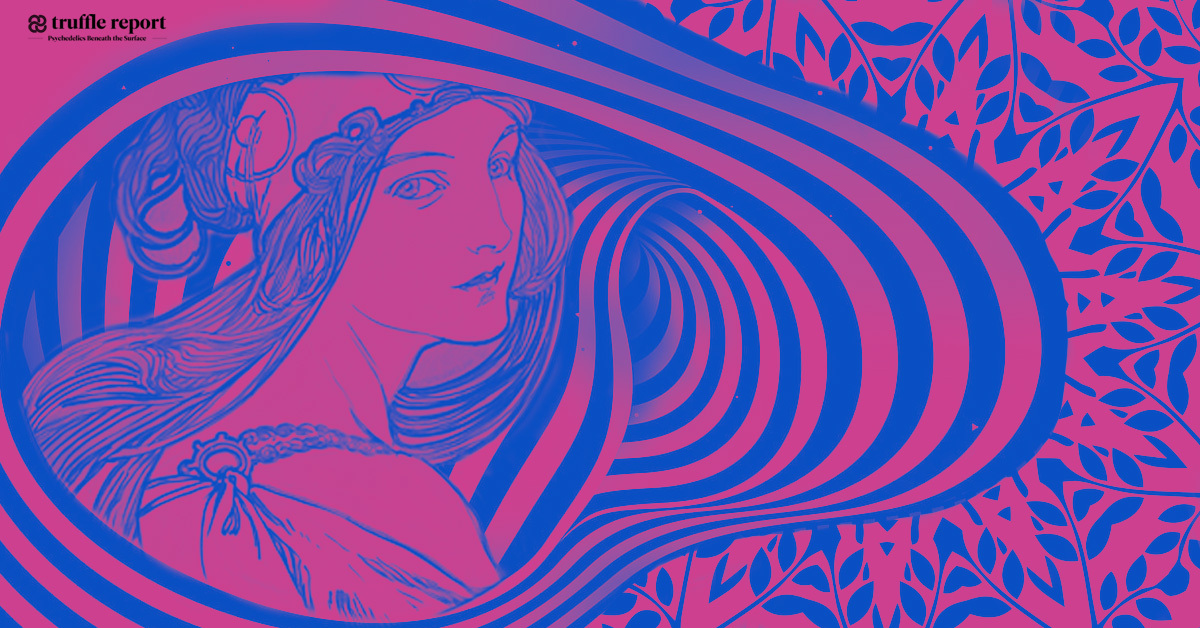 Psychedelic Art & Designs: The Minds Behind The Movement

Where did psychedelic art come from? Picture the sixties, and you’ll probably think of the youth culture and hippie movement, the summer of love in San Francisco, and psychedelics everywhere. It all calls to mind a very specific aesthetic of kaleidoscopic spiral patterns, clashing extremes of bright color, and optical illusions. The psychedelic art movement had a distinct style that began in the mid-1960s and helped shape artistic expression in fashion, art, music, and literature for decades to come.

These days, psychedelic art is best remembered as part of the psychedelic movement as a whole, having produced some iconic posters and comic book art. Influenced by psychedelic drugs, it didn’t take long to recognize the commercial potential of the new style, which would have a strong impact everywhere in popular culture from album covers (think Pink Floyd or the Beatles), to underground comic books (literally named Underground Comix in some cases).

Contemporary artists still practice a wide range of psychedelic art styles, with or with the hallucinogenic drugs. While inseparable from rock music, business trends involving this trippy art style have gone everywhere from the rave movement to the current boom in Mandala wall art and tattoos.

The word “psychedelic” was invented by the pioneering British doctor Humphry Osmond in 1957, who was among the first medical professionals to use psychedelic drugs such as LSD to try and understand mental illness. From the Greek words psyche (for mind or soul) and deloun (for show), psychedelic means “mind-manifesting.”

There’s a long history of art portraying what we believe to be psychedelic substances and experiences, though we haven’t always been as thorough as we could be about the label. In 1500 BCE, stone sculptures portrayed mushrooms from whose stems show the heads of Gods in Mexico and Central America. Some Native American artists expressed their psychedelic experience from peyote visions in fabric, stone, or other objects.

To name a few examples closer to our own day (but still prior to the actual psychedelic art craze) Edgar Allen Poe tried opium, and Poe’s French translator Charles Baudelaire wrote “The Poem of Hashish,” describing his experiences with the mind-altering substance. Two other French writers, the playwright Theophile Gautier and the writer Thomas De Quincey, also wrote about their experiences with opiates. The absinthe craze, beginning in France and spreading around the world, inspired imagery that anyone who has experience a psychedelic vision would find familiar..

Modern psychedelic art is heavily influenced by Art Nouveau, an ornamental style born during the time when industrial technology was changing rapidly. It often featured feminine figures, bright peacocks, plants, and scenes of nature. There is also a heavy dose of abstract painting in the DNA of the entire movement, fueled by the hallucinatory experiences and visual styles of a drug culture involving psilocybin mushrooms and lysergic acid diethylamide (LSD).

Emerging in the 1960s, psychedelic art became the visual identity of the hippie movement in the Western world. San Francisco was the world capital of counterculture, where art was finding new ways to express the emotions and sensations of drug-induced hallucinations. Amidst the civil rights movement and the Vietnam war, many young Americans questioned their society’s political and social outlooks, raising such issues as racism, sexism, and freedom of speech. Many sought spiritual healing through psychedelic drugs. Psychedelic art was a reflection of the era, with concert posters, album covers, newspapers, and comic books representing the political, social and spiritual gleanings from these altered states of consciousness.

American Artist Wes Wilson was one of the leading designers of psychedelic art posters. He made trippy-looking posters for many prominent bands, including the Grateful Dead, Otis Redding, and Jefferson Airplane on the San Francisco scene. Wilson invented the psychedelic art style that is now used to describe the peace movement of the 60s. He used flowing and fluid forms to create different and unique shapes of lettering. The psychedelic poster was defined by Wilson in 1966.

Griffin, inspired by the work of Stanley Mouse and Alton Kelley, decided to start a psychedelic art career in poster design. He was a regular contributor to Zap Comix and was known to be one of the original ‘surf artists.’ Griffin made posters for Jimi Hendrix, Albert King, the Grateful Dead, and the logo for Rolling Stone magazine.

Spanish artist Victor Moscoso made some of the most memorable psychedelic posters of the era. One of the few psychedelic artists who had extensive formal training, Moscoso studied at Cooper Union and earned a B.A. from Yale. In 1961 he earned a master’s degree in painting at the San Francisco Art Institute. He made posters for the Doors, Jerry Garcia, and Jed Davis. He was also an illustrator at Zap Comix.

Mouse is known for creating psychedelic art and posters for numerous musicians such as The Rolling Stones, the Beatles, Janis Joplin, and Jimi Hendrix. His posters were heavily influenced by Art Nouveau graphics, especially by the works of Alphonse Mucha and Edmund Joseph Sullivan. Mouse worked in close collaboration with Alton Kelly for 15 years.

Kelley, together with Mouse, is remembered as a creator of hundreds of classic psychedelic art posters, with the most famous being the “skull and roses” poster for a Grateful Dead show at the Avalon Ballroom. Kelley and Mouse created posters and album covers for Journey, Steve Miller, and Jimi Hendrix.

MacLean helped define the psychedelic art space in the early 70s. She stood out as one of the only women in the field at that time and was not recognized among the Big Five, which included Wilson, Mouse, Kelley, Moscoso, and Griffin. MacLean made posters for shows and events that featured artists such as Led Zeppelin, Jefferson Airplane, The Doors, and The Who.