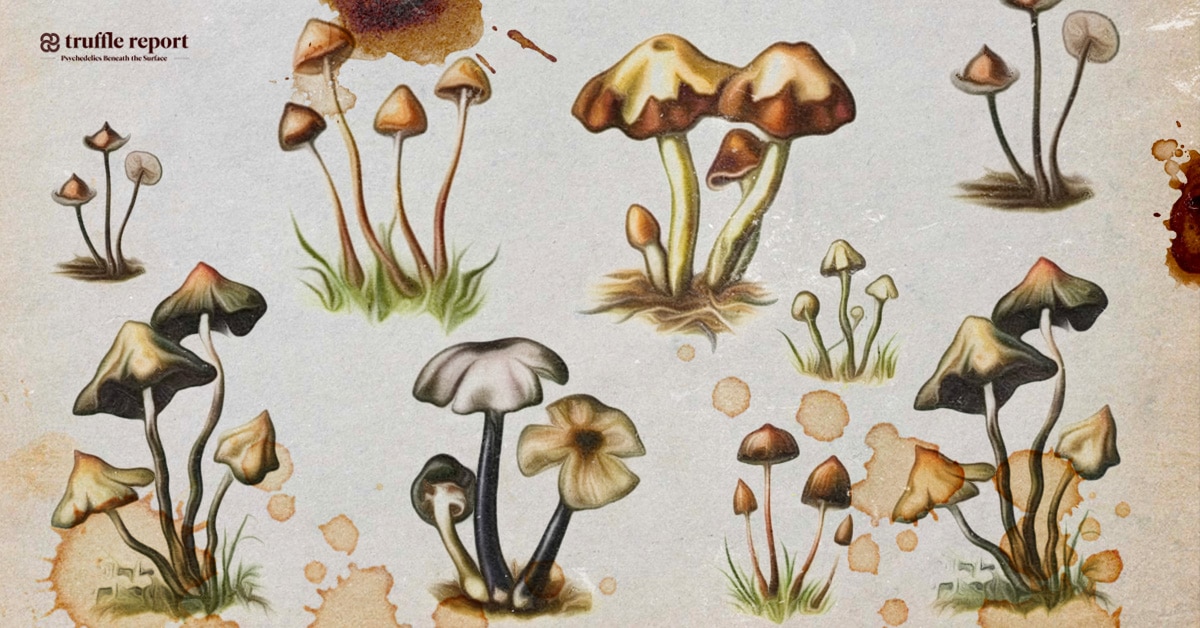 Psychedelic mushrooms, also called or magic mushrooms — or simply shrooms — have been used by different indigenous groups for centuries for ritualistic, recreational, and medicinal purposes. According to one source, there are over 200 mushroom species with some level of psychedelic potential. Though this number varies depending on who you ask, each has different strains, shapes, flavours, and potency levels of three primary psychotropic compounds — psilocybin, psilocin, or baeocystin.

Data from the 2019 Global Drug Survey indicates that among the 20 drugs used most often over the past year, six were psychedelic drugs. From 2017 to 2019, magic mushroom trips had increases in lifetime use from 24.4 percent to 34.2 percent and use in the last 12 months from 10.4 percent to 14.8 percent.

Truffle Report takes a look at the best-known magic mushroom species from the genus Psilocybe.

Of all the types of magic mushrooms, the genus Psilocybe is the most popular and widespread.

According to Gaston Guzman, author of “The Genus Psilocybe” (who differs from ICEERS) there are 227 species of Psilocybe, with 144 known to be hallucinogenic.

Psilocybe cubensis, also known as “Gold Caps”, or cubes, are among the most common psychedelic mushrooms. They can be found across the United States, South America, Central America, Mexico, Thailand, India, Cambodia, and Australia. This kind of mushroom has a reddish-brown cap with a white-to-yellowish stem. The most popular strain of Psilocybe cubensis is Golden Teacher. Paul Stamets in his book “Psilocybin Mushrooms of the World” calls Psilocybe cubensis “the most majestic of the Psilocybes.” Stamets gave Psilocybe cubensis a rating of moderately potent compared to other magic mushrooms.

According to TripSitter, the concentration of psilocybin in these mushrooms can vary from 0.6 percent of the dried weight to 1.2 percent. Psychedelic effects occur 20-60 minutes after ingesting and can last from 4-10 hours. These species are said to provide classic psychedelic emotional experiences of love, unity and euphoria.

Often referred to as “Liberty Caps,” they are one of the most potent and recognizable magic mushroom species. The fresh mushrooms are found in damp, grassy areas such as farms, meadows, and sedges. According to Psillow, the oldest confirmed account of Psilocybe semilanceata was in 1799 in London, England; making it the first magic mushroom native to Europe identified as containing psilocybin. They can be found across Europe, North America, South Africa, India, Australis, Tasmania and Chile. Psilocybe semilanceata has cream to greyish coloured bell-shaped caps.

Psilocybe semilanceata is the third-most potent of the common Psilocybe mushroom species with around one percent psilocybin content. It is considered to be the most user-friendly of all magic mushrooms. Consumption results in hallucinations and increased heart rate and blood pressure which can result in a bad trip when consumed in high quantities.

Psilocybe mexicana is commonly found in Central and South America in moss and meadows. The Aztecs referred to this mushroom as “Teonanacatl” meaning “flesh of the gods.” They were consumed fresh or dried and often mixed into honey by indigenous peoples. These mushrooms were the source Albert Hofmann used to isolate and analyze the active compounds psilocybin and psilocin for the very first time.

According to Psillow, the hallucinogenic effects from Psilocybe mexicana will generally reach their peak within an hour or two of psychedelic journey. This psychedelic experience comes to an end within six to eight hours. These mushrooms are commonly referred to as “Pajaritos” (little birds) in Mexico. They are small but potent magic mushrooms, and can also grow truffles or scletoria as part of their mycelial structure, which contain both psilocybin and psilocin.

Known as “Wavy Caps” due to the shape cap takes once the mushroom is fully grown, Psilocybe cyanescens are commonly found in North America, Europe, the United Kingdom, Australia, and New Zealand. They were first identified in England in the early 1900s. Psilocybe cyanescens grow among wood chips, woody debris, and in areas with lots of decaying wood, such as trails and gardens.

This species is exceptionally potent for a psychedelic trip due to high levels of psilocybin and psilocin. Psilocybe cyanescens can contain between 0.3 percent to 1.68 percent psilocybin, 0.28 percent to 0.51 percent psilocin, and 0.02 percent to 0.03 percent baeocystin. According to anecdotal reports, when consumed in high enough amounts, Psilocybe cyanescens can cause wood-lovers paralysis (WLP), a temporary condition that can temporarily cause partial or full-body paralysis.

The most potent Psilocybe mushroom that grows on the West Coast of the United States, from California to Washington. Psilocybe azurescens, also known as “Azzies”, “Blue Angels”, or “Flying Saucers” due to their cap shape, can be found growing in wood chips, dune grasses, and sandy soils. They were initially found by Boy Scouts camping in Oregon in 1979. Psilocybe azurescens was officially classified in 1996 by Stamets in Psilocybin Mushrooms of the world. These mushrooms usually grow in the from October through December, and are capable of withstanding chilly temperatures, unlike other mushrooms.

These mushrooms typically contain an average of 1.78 percent psilocybin and 0.38 percent psilocin. Psilocybe azurescens also contains significant amounts of baeocystin, which is an analog of psilocybin.

Due to extremely high levels of psilocybin, they produce hallucinations, vivid emotions, and anecdotally, temporary paralysis, and heightened spiritual experience during a psychedelic journey. Psychedelic effects can occur 30 minutes after ingestion.

This mushroom got its name from the Zapotec Indigenous community of Oaxaca, Mexico, which translates roughly to “crown of thorns mushrooms.” It is also often called bado, badao, and badao zoo meaning “drunken mushroom.” Psilocybe zapotecorum can also be found in Colombia, Peru, Chile, Venezuela, Argentina, and Brazil.

They are found near rivers, creeks and ravines. According to Psillow, this species has moderate to very high potency.

Known as Philosopher’s Stones, Psilocybin Truffles, and Magic Truffles, Psilocybe tampanensis was first discovered in 1977 in Florida by Stephen Pollock and Gary Lincoff. This species produces truffles, or sclerotia, which contain psilocybin. According to TripSitter, it’s rare to find these mushrooms in the wild,  but they have become popular for home cultivators due to the ease with which they can be grown.