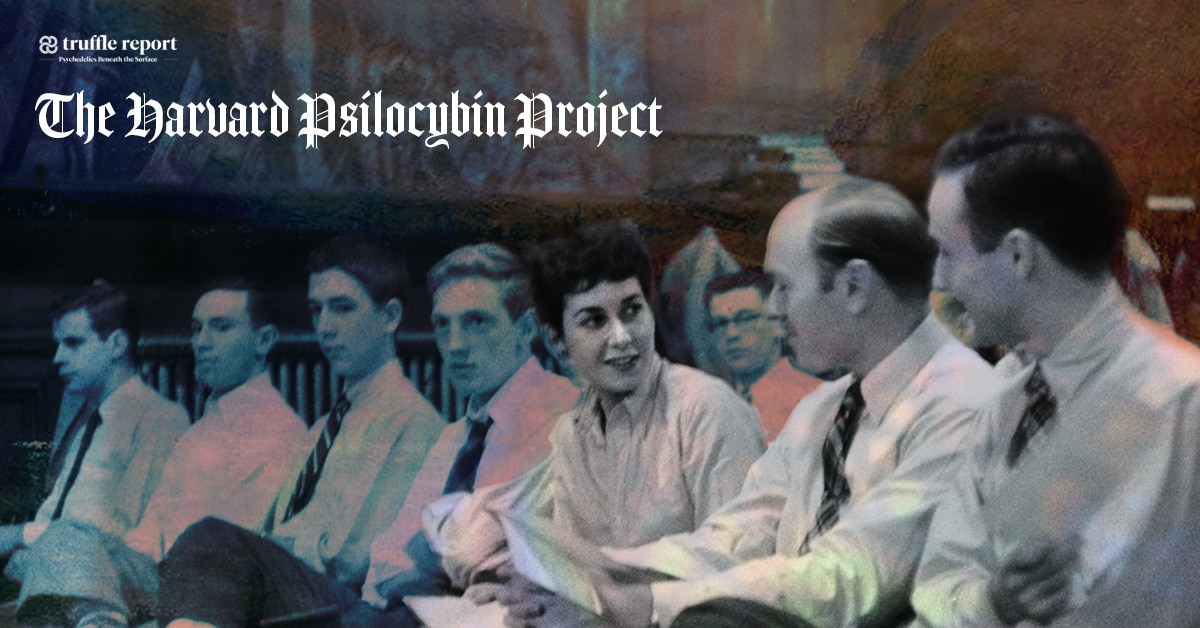 From 1960 to 1962, Richard Alpert, now better known as Ram Dass, and Timothy Leary administered psychedelic drugs to a wide cross-section of Harvard University students, in what would later become known as the Harvard Psilocybin Project.

Speaking for my own graduating class, most of us would have loved the idea of undergoing a psilocybin experience for course credits during our college years. In a 50-year retrospective of the experiments published in The Harvard Crimson, one student was quoted as saying, “My recollection was that you could choose between taking the final or participating in the psilocybin trials. Not many of us chose to take the final.”

On the surface, this process seems innocent and almost childishly naive compared to the storm of cultural clashes and drug wars that were to follow in the coming decades. In practice, these experiments were a microcosm of things to come, not just in the furor they brought down from the academic establishment, but from the biases they consciously or unconsciously embraced, and the ever-present issues of accountability and research standards that persist to this day despite the obvious potential of psychedelics in modern mental health.

That the two were eventually fired is not news. More often overlooked is the fact that the quantities of classical psychedelics like psilocybin and LSD in question were often obtained legitimately from international pharmaceutical sources such as Sandoz before being catapulted over the laboratory walls to enthusiastic young Americans.

While nominally intended for medical research purposes, staggering amounts of psychedelics made their way from these stashes and others like them into public consumption. It is not hard to draw parallels to other substances that have escaped from the lab to become street drugs, or to see this as a warning for the once-again bright future of psychedelic medicine.

Leary and the Origins of the Harvard Psilocybin Project

Timothy Leary and Richard Alpert’s experiments were by no means limited to psilocybin, or to the two of them in an oversight capacity. Also on the initial project board were Ralph Metzner, Frank Barron, David McClelland (their direct superior at the university), and Aldous Huxley, author of The Doors of Perception and Brave New World, who had helped Humphry Osmond coin the term ‘psychedelic’ itself.

Nor were they confined solely to the hundreds of Harvard students they formally, or informally at campus parties, provided these substances to, as experiments on psychological effects with prison inmates at Concord during the same period evidenced.

But what began the Harvard Psilocybin Project in the first place? A 1963 article in Look Magazine detailing the scandal surrounding the conclusion of the experiments sums up the attitudes of the time.

“Supported by the Harvard Center for Research in Personality, Richard Alpert, with his associate Dr. Timothy F. Leary, a lecturer on clinical psychology, set out to investigate the new drugs. Many scientists had studied hallucinogenic drugs before 1960, but most of them were physicians, interested in determining physiological effects or in using the drugs to reproduce, under laboratory conditions, the symptoms of mental illness. LSD, particularly, was widely employed in the early 1950’s to cause “model psychoses” in normal subjects, and there was some hope that these experiments would point to an understanding of the chemical basis of schizophrenia. Unfortunately, these early efforts produced little new or valuable information. The biochemistry of the drugs remains to be worked out, and the dream of understanding the chemical nature of mental illness has not materialized.

Today, there is very little medical research with the hallucinogens. But the medical studies indirectly gave rise to another kind of interest in the drugs. Many of the people who served as subjects were overwhelmed by the experience. Some — especially artists, students and creative writers — called it the most significant experience of their lives. A few set about popularizing the hallucinogens in magazine articles and books, and stimulated considerable nonprofessional curiosity.

The bulk of the medical evidence indicated that LSD, mescaline and psilocybin were not physically dangerous. Certainly, they could not cause addiction. There were, however, alarming reports of temporary acute mental damage that resulted from taking the drugs, and hints that unsupervised use of them could lead to permanent adverse psychological changes. For example, in one of the early experiments, at the Harvard Medical School, a student volunteer subject under LSD was almost killed when he walked into rush-hour traffic on Boston’s Huntington Avenue, “believing he was God and nothing could touch him.” Descriptions of the drugs stressed such effects as heightened perceptions, increased awareness of one’s surroundings, tremendous insights into one’s own mind, accelerated thought processes, intense religious feelings, even extrasensory phenomena and mystic rapture.”

Separate from the campus activities with undergraduate students at Harvard University but still a part of the team’s overall behavioural research project was the Concord Prison Experiment, taking place from 1961-1963 at the state prison in Concord, Massachusetts. While experimenting with psilocybin on inmates who usually have to smuggle drugs in may seem a little counterintuitive, the experiment was actually a unique idea.

Criticism abounds about the scientific rigour and accuracy of the study, often related to the fact that researchers dosed themselves along with the prisoners in question to create a sense of ‘equity’ in the experiments. The large decreases in recidivism reported by the original experiment have not held up to scrutiny, but the notion that rates of crimes perpetrated by repeat offenders could be impacted by personal, spiritual, and introspective experiences occasioned by psychedelics was unquestionably worth exploring.

The Psychedelic Experience at Marsh Chapel

Psychedelics have always had a close relationship with our conceptions of the divine. Leary and Alpert’s Harvard Psilocybin Project may not have had much in the way of concrete scientific objectives, but they could still experiment. Organized by theology graduate student Walter N. Pahnke under the pair’s supervision, the 1962 Marsh Chapel Experiment (also known as the Good Friday Experiment) was, in retrospect, comically rife with confirmation bias. It could be argued that giving divinity students psychedelics could hardly produce results other than a mystical experience.

This episode was also an early indicator of an ongoing problem in psychedelic research. Participants could very easily tell who had actually been administered a psychedelic substance and who had been given a placebo, influencing the quality of both the experiment and the religious experience. According to author Michael Pollan’s How to Change Your Mind, one subject who experienced a bad trip had to be removed and treated for religious hysteria with a shot of thorazine.

Conclusions of the Harvard Psilocybin Project

This series of experiments was an essential part of the birth of the 1960s drug culture and counterculture movement. The objectivity and accuracy of any actual data collected by the researchers is questionable by modern standards, and continued to degrade after their departure from the formal academic establishment. The founding of the International Federation for Internal Freedom and the Zihuatanejo Project, simultaneously with the Harvard Psilocybin Project, extended the infamy beyond American borders.

More easily quantifiable than any scientific results is the sensation they caused. LSD and other psychedelics were already slipping through the cracks into mainstream American society. What followed the Harvard Psilocybin Project was an explosion, coinciding with a changing culture and an unwinnable war, and brought on by equal parts hope for the future of these substances, ego, sensationalism, and fear.