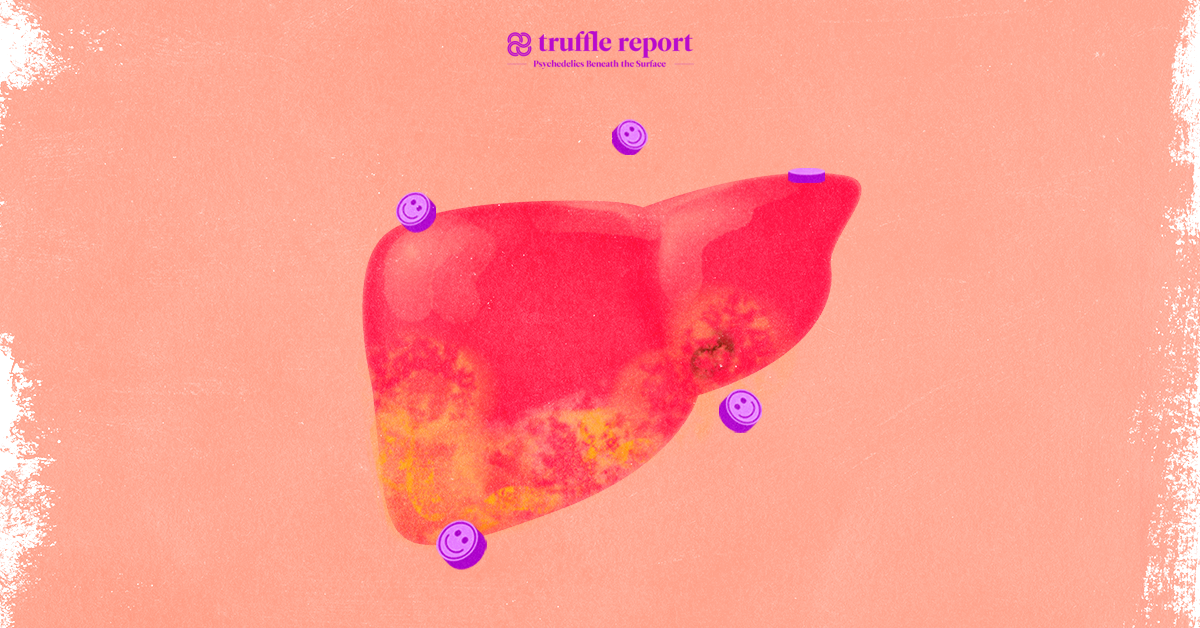 The Effects of MDMA on Liver Health

MDMA’s popularity as a party drug is due not only to its prosocial effects but also because the substance is seen as relatively low risk, at least in comparison with other stimulant party drugs like cocaine. But is MDMA actually safe? The truth is, MDMA use has been associated with a wide spectrum of organ damage, with the liver being severely affected by the substance. Cases of MDMA-associated hepatotoxicity can range from asymptomatic liver injury with confirmation of elevation of the liver function tests to fatal acute hepatic failure.

Different kinds of liver injury are recognizable, including minor benign lesions, viral hepatitis, extensive or focal hepatic necrosis, and total loss of liver parenchyma and function with accompanying encephalopathy, cerebral edema, and multiorgan system failure. The presentation of MDMA hepatotoxicity varies. The time of ingestion and onset of symptoms, as well as doses, do not seem to correlate with the clinical severity, and recurrence can also occur due to prolonged use, as chronic use of MDMA can lead to fibrotic changes.

The effects of MDMA on liver health are currently being studied in order to determine whether the reported damage is related to the substance itself or the purity of the drug that users are able to access. The findings of these studies will have a substantial impact on the design of future trial and therapy protocols for MDMA.

A study conducted by Zahedan University of Medical Sciences in Iran and published in the International Journal of High Risk Behaviors and Addiction in 2014 was carried out to determine the effects of MDMA in rats’ blood sugar, lipids profile, and liver function tests. The experiment was performed using 50 adult rats which were divided into five groups of 10. Control group A received tap water and an ordinary rodent diet. Control group B was administered a saline solution. Test groups C, D1, and D2 received single dose and multiple doses of MDMA, respectively.

After the experimental period, the rodents were anesthetized with diethyl ether, euthanized, and blood samples were collected for the evaluation of blood glucose, serum lipid and aspartate transaminase (AST), alanine transaminase (ALT), and alkaline phosphatase (ALK-P). In all test groups, the values of blood sugar, low density lipoprotein, and cholesterol were significantly higher compared with those of control groups A and B. AST and ALT also significantly increased in groups D1 and D2 compared with those of groups A, B, and C. These results showed that chronic administration of MDMA affects the liver as well as lipoprotein profile in male rats.

A case study conducted by the Department of Emergency Medicine at Marmara University School of Medicine in Istanbul, Turkey was published in 2008 in the peer-reviewed journal Current Therapeutic Research. While this research is over 10 years old, the findings are still relevant.

A 23-year old male patient presented to the emergency department of Marmara University hospital with jaundice, yellowing of the skin and whites of the eyes, and nausea lasting for six days. The patient claimed that he had been a chronic user of MDMA for two years. He also reported that one week before the incident that landed him in the hospital he had ingested two tablets of ecstasy at the same time, which was double his usual amount.

Blood tests were performed and his levels of AST, ALT, ALK-P, bilirubin, and other enzymes and substances associated with liver health were abnormally high. His levels of AST, for example, were 40 times above normal levels. The patient’s medical history revealed that the current incident was his second occurrence of jaundice and acute hepatitis associated with the ingestion of large amounts of ecstasy. In this particular case, it seemed that MDMA was responsible for the patient’s liver damage and acute hepatitis. Research recommended that the use of this substance should be investigated in young patients with severe hepatitis of unknown origin.

A clinical trial that aims to study MDMA’s effects on liver health in patients with moderate hepatic impairments and others with normal hepatic function is currently being conducted by MAPS. It commenced in March 2021 and is expected to be finalized in December of the same year. This is an open-label, single dose study evaluating the effect of moderate hepatic impairment in the pharmacokinetics of MDMA and its active metabolite, MDA in order to decide whether an adjustment to the dosage would be needed for individuals with moderate hepatic function in comparison to those with normal liver function.

Eight participants with moderate hepatic impairment and eight participants with normal hepatic function were selected to take part in this study. Subjects will stay in the study site for three days. On day one, they will receive a single dose of 80 mg MDMA. For the following seven to eight hours, they will have blood samples collected and will rate their mood. On the second day, blood will be drawn twice, and once on the third day. They will also have their heart function measured with ECG. Blood will be also be drawn 24, 36, 48, 72, and 96 hours after MDMA administration.

Participants’ moods and feelings will be measured half-hour, one, two, four, six, and seven hours after being administered MDMA. Blood pressure, heart rate, and body temperature readings will also be collected. Blood samples will be used to calculate the maximum amount of MDMA and MDA in the blood (Cmax), the time until reaching peak MDMA or MDA (Tmax), and the area under curve (AUC), or actual degree of exposure to substance. The primary outcome measure will be AUC for MDMA. This will allow researchers to determine if there are differences in drug metabolism between people with healthy livers and those with liver impairment. The findings will allow future trials to perform MDMA-assisted therapy in a safer way.