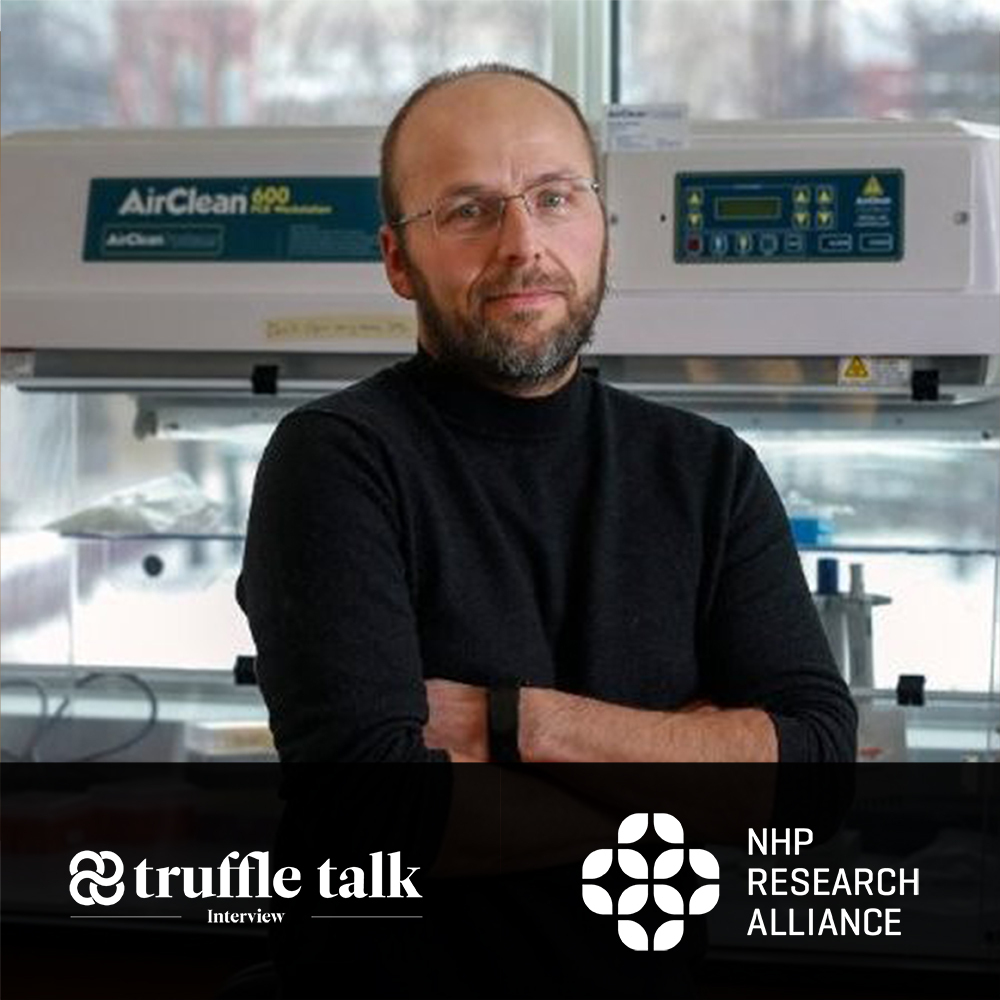 Natural Health Products. It’s a deliberately ambiguous designation for an industry that hasn’t always been accountable. Despite many of the substances falling under that broad umbrella having been used successfully for centuries to treat all manner of ailments, they are not formally recognized as medicine under the law. For this reason, manufacturers and sellers can skirt more stringent regulatory requirements, resulting in frequently mislabeled or adulterated products. This might be malicious, or simple ignorance and lack of oversight. Steven Newmaster is a Professor of Genomics at the University of Guelph. He’s also the founder and director of the Natural Health Product Research Alliance, a regulatory body working with the NHP industry to establish a standardized DNA library for Natural Health Products in order to address these problems. As an extension of that work, Newmaster and his team are involved in building comprehensive genetic libraries for cannabis, and mushrooms both psychedelic and functional, which will help ensure these new and expanding industries are held to the same standard.

I started off by asking Newmaster for some background on himself, and his career. “I’m a professor at the University of Guelph, in Botany, Genomics, and Metabolomics, including the ethnobotany program. I have been for 20 years. My interest in botany stems from childhood. I grew up on a farm. My mom was a master gardener and she exposed me to plants as nutrition, and for good health. I became fascinated by plants and how to use them. I spent a lot of time learning about different types of plants and how to ID them, but also reading about how they’d been used medicinally and nutritionally. That took me into a classic botany program, and I started to train as an ethnobotanist, taking anthropology and chemistry, travelling the world to see how cultures used plants. That’s when I started to train graduate students in that area. Twenty years and 150 publications later, we have quite a bit of experience in how plants are used to heal. Which includes mushrooms,” he adds, for my benefit.

Newmaster on the Origin and Purpose of the NHP Research Alliance

I wanted to get right into the work of the NHP Research Alliance. Natural Health Products as an industry are experiencing massive growth. One of the things that drew me to this research in the first place was the projected outlook for the functional mushroom industry, and the number of psychedelics companies looking to make the most of these early opportunities for revenue. I asked if the NHP Research Alliance was a decision on the part of this industry to self regulate. How did it come about?

“Around 2000, we started to build libraries for medicinal plants. We wanted to be able to record genetic and phytochemical diversity from samples we were collecting all over the world. By about 2010 we had considerable data, and we decided to do an exercise. Some of the graduate students and I decided to pull some samples from the shelves in stores, and see if we can get DNA, and if we can match them to our extensive libraries, which were samples of known provenance. When we did, we found that not everything matched on labels. There was a considerable problem of adulteration. I decided to do something about it.”

“The premise of my research program is studying how plants heal. If we’re taking plant products for our well-being, and they don’t work because they’re adulterated, that doesn’t serve anyone. That became quite a passion for me and my research team. We started to build tools and interact with the industry to understand who’s responsible for making sure ingredients are authentic. It’s been over a decade, and my feeling is that it’s a shared responsibility. The government keeps things safe. They make sure we don’t have pesticides, toxic ingredients, or pathogens. Those are the things that kill us quickly. Efficacy and purity in a product are really incumbent among the industry. We had a few companies who really cared, and stepped forward and said ‘We’ll work with you. We want you to do research.’ At the University of Guelph we started the NHP Research Alliance, bringing together industry, regulators, scientists from other universities, and we work with them to answer these questions about purity and efficacy. We’ve had an overwhelming response. It’s been very productive. We’ve been publishing a lot and we’ve been providing a lot of tools to the industry.”

I wanted to shift focus a bit. Frequently, Truffle Report deals with the overlap between psychedelics and NHPs from the perspective of psychedelics companies and markets. Given that several of these companies are making moves into the functional mushroom market, and are planning on marketing psilocybin from the perspective of natural health products, I wanted Newmaster’s opinion on the possibilities. What would the inclusion of psilocybin in the NHP market mean for that space? What challenges or opportunities would that present?

“The first thing to point out is that plants and mushrooms are here for our good health. They have chemistry that heals, or is good nutrition. It doesn’t matter if I’m studying this, or psilocybin, or some other psychedelic. From my perspective, we’re just trying to understand the science. There may be some breeding events to try and remove some of the harmful effects of these psychedelics. How can we work with the government and make tests that assist the industry and regulators in effective, safe, quality products?”

“Underpinning it all, at the end of the day, is trying to understand mechanistically how these plants work. One of the things we’ve been doing is working with non-target chemistry, working with broad genomics. Doing genome scans to understand the genetic profiles of these plants.” It was at this point that Newsmaster stepped back, and offered a lesson on chemistry. “A lot of the chemistry we do falls under the heading of targeted chemistry,” he tells me. “There are instruments like HPTLC and MassSpec where you’re measuring the molecular weight. You’re targeting a particular molecule because you have a hypothesis that it’s bioactive and it’s the important one. That’s a challenging question. Going into say, cannabis, and saying that THC is the bioactive marker that we want to follow makes many assumptions. There are many other cannabinoids, minor and major, that are very bioactive and have influence in our bodies. It’s a biased approach. What about everything else?”

“What we do is take a non-targeted chemical approach, say through magnetic resonance and creating a metabolite fingerprint. We take these for cannabis cultivars, and we database the fingerprints based on known provenance of the cannabis, the same way we do for other botanicals. We’re also doing this for psilocybin mushrooms now, collecting different species from all over the world. We’re documenting not only the psilocybin, but doing that same magnetic resonance imaging, and starting to name some of these other bioactive markers and create metabolite profiles. This is novel, it hasn’t been done on a large scale. As we do this, we’re seeing molecules we’ve never seen before, and we have to go through what we call structural elucidation to look at proton structure, and do in vitro screenings in live neurons from various brain regions to understand bioactivity in different humanistic models. Some minor metabolites in these mushrooms could be very important neurologically for treating, say, PTSD for example. It’s not just the psilocybin. It’s these other metabolites that we hypothesize interact in some ways. It’s some really exciting, cutting edge work that my colleagues and I are doing right now,” Newmaster says

I confess, I hadn’t been previously aware of the depth of Newmaster’s work into psychedelics before going into this interview, and could only agree that it was fascinating stuff. I told him so. “It’s a new frontier,” he agrees. “My very first job in science was working with Dr. George Barron, a famous mycologist. He taught me how to work with mushrooms, and I was quite fascinated with collecting them and taking spore prints as a field botanist. It’s nice to be coming back to this after twenty years and to start working on mushrooms again in such a large project at a global scale.”

With this admittedly groundbreaking research in mind, I wanted Newmaster’s take on industry practices within NHPs. Psychedelics seem to be on track to adopt an overlapping market share. I asked what he’d seen that the new industry could learn from. He answers quickly, saying “There’s adulteration in the market. Why do people do it? Sometimes it’s accidental, species are mixed up, taxonomy and latin names. It happens, we get mixing of ingredients, and we have tests to check for it. It’s going to happen with mushrooms as well. We need good genomic libraries. We need known provenance. We need the right tools. It’s a good lesson. In terms of the tools themselves, they need to be validated. Science sometimes gets ahead of itself. You can have some really great tools that aren’t validated. We make all of our methods public. We did it a lot for botanicals, we’re doing it for probiotics now, and the documentation for our mushroom research will be coming out soon.”

“The last thing I’ll say is that historically, a lot of these ingredients were traded in their raw form, and with that you see abundant chemistry and DNA. The industry in the last decade has made a move toward extracts. These don’t have a lot of bioactive ingredients. They’re highly processed, lots of filler, very little DNA. Some people hypothesized there was no DNA, and we actually published a series of papers confirming that it was there, just in very small amounts. We’re seeing this in functional mushrooms already. It’s traded as extract powder. That becomes a challenge for the technology that’s used to be able to sustain QA testing. The answer is to use the right tools, like NMR (nuclear magnetic resonance). We’ve created those libraries for botanicals, and we’re going to be building them for mushroom extracts. They’ll be available for the industry.”