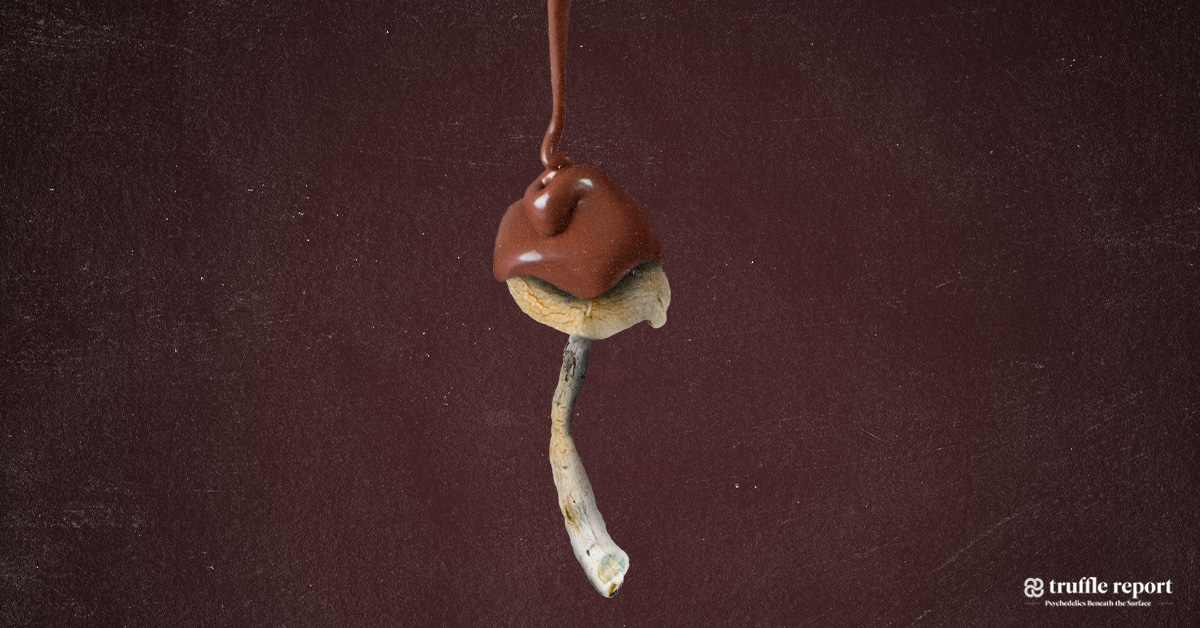 Chocolate… with a magic mushroom on the side?

Among those who use psychedelics, there is a growing interest in a practice known as “stacking.” Stacking involves combining psychedelics (usually a magic mushroom containing the psychoactive compound psilocybin) with other non-psychedelic substances to enhance the drug’s effects.

Truffle Report has taken a deep dive into the origins of this practice, looking at popular stacking combinations and the reported benefits of mixing psychedelics with substances such as chocolate and Lion’s Mane mushrooms.

The Origins of Stacking Psychedelics: The Aztec Combo of Psilocybin Mushrooms and Cacao/Chocolate

The most significant example is a practice of the Aztecs of Mexico of combining psilocybin-containing mushrooms with liquid cacao (from the cacao tree whose seeds are used to make today’s chocolate). This ancient combination was referred to as “cacahua-xochitl,” literally meaning “chocolate-mushrooms.” The Aztecs also combined psilocybin mushrooms with admixtures containing honey, flowers, and herbs, according to records of Aztec history by both Indigenous and non-Indigenous peoples.

A typical mushroom ceremony was a spiritual experience and would involve cacao, revered by the Aztecs, who considered the food a gift from the gods. Cacao beans would be ground into a paste and mixed with water, chili peppers, and corn. It would then be poured between pots until it formed a frothy foam. During the ceremony, the Aztecs would reportedly drink the cacao first, then eat the psilocybin mushrooms with honey. Alternatively, they would combine the mushrooms with the cacao drink to create a mixed beverage.

It is speculated that this practice, referred to today as the “Aztec Combo,” was carried out because the Aztecs believed cacao offered health benefits (such as being a mood enhancer) that would complement the healing and medicinal benefits of the psilocybin mushrooms.

According to a study by Rootman, J.M., Kryskow, P., Harvey, K. et al. published in Scientific Reports in November 2021 on microdosing practices, diverse stacking practices are being carried out by today’s psychedelics users. The study, ‘Adults who microdose psychedelics report health-related motivations and lower levels of anxiety and depression compared to non-microdosers,’ found that more than half of the research participants reported combining their microdose with another substance.

The researchers confirmed that cacao (also in the form of chocolate) remains a popular addition to psilocybin. Their survey also revealed a number of other, newer favored combinations, including:

According to Rootman, J.M., Kryskow, P., Harvey, K. et al.’s microdosing study, psilocybin users are far more likely to combine psilocybin with other substances than lysergic acid diethylamide (LSD) users. The most popular combination is Lion’s Mane, with 39% of both psilocybin and LSD users reporting that they stacked this with a dose of their drug of choice. This was followed by niacin (18%), Stamets’ formula of Lion’s Mane mushrooms and niacin (16%), and chocolate (5%).

When asked why they chose to add other substances into their microdosing practices, 77% of study participants said their motivation was to enhance their creativity, and 56% said it was to enhance learning.

Similar to the broader practice of microdosing, the researchers speculated that the growing popularity of stacking has stemmed from “the proliferation of positive anecdotal reports over the past decade, rather than from a strong empirical basis.”

The Benefits of Stacking Psychedelics: Is it Possible to Enhance the Effects of Psilocybin?

There is anecdotal evidence and theoretical rationalization that stacking psychedelics such as psilocybin with other substances can improve a person’s psychedelic experience.

For example, both Lion’s Mane mushrooms and Syrian Rue are monoamine oxidase inhibitors (MAOIs), which has been suggested as a reason why they are complementary to psilocybin mushrooms. MAOIs have long been used in psychedelic admixtures (such as ayahuasca) to extend and enhance the effects of 5-HT2a receptor agonists, essentially preventing the degradation of dopamine or serotonin, which leaves a person feeling happy and joyful for longer.

In sufficient quantities, cacao is also thought to produce a mild MAOI effect. Further, cacao is believed to enhance psychedelic mushrooms because it acts as a vasodilator, meaning it can widen the blood vessels and lower blood pressure. In the context of consuming psychedelic mushrooms, this increased blood flow can encourage the body to uptake more active components of the drug.

There is also limited research from 1956 by psychedelic researcher Abraham Hoffer on the effect of niacin on LSD use. Hoffer found that the addition of niacin at the height of a subject’s experience with LSD saw the effects of the psychedelic drug disappear within two to five minutes “and the subject claimed he was entirely normal.” However, if the niacin was added before the LSD, it could prevent perceptual distortions in the subject. Given that each of these experiments involved a single subject and much time has passed since they were carried out, further research is needed to validate Hoffer’s initial findings.

Stamets has also suggested that niacin — a key feature of the “Stamets Stack Formula” — can facilitate psilocybin bioavailability (increasing the amount of the drug that can have an active effect in the body) and reduce its potential for abuse. Despite a lack of clinical evidence to support this, it is also claimed that Stamets’ formula promotes reduced anxiety and depression, relief from post-traumatic stress disorder (PTSD) symptoms, and an increased ability to socialize, empathize, and feel courageous.

Before you go ahead and secure some niacin, cacao, or a box of chocolate bars for your next psychedelic trip, it’s important to note this lack of peer-reviewed research on the effects of stacking psychedelics with any substance. What has been carried out to date has primarily involved animal models, not human subjects, meaning any possible adverse side effects are unknown. The researchers behind the aforementioned microdosing study warn: “caution is warranted when interpreting claims related to the synergistic effects of stacked substances and psilocybin in humans.”

“To our knowledge, no studies have directly tested potential synergistic effects of these substances when combined with psilocybin. A promising avenue for future microdosing studies would be to distinguish the independent effects and synergies of psychedelic and stacked substances,” the researchers concluded.