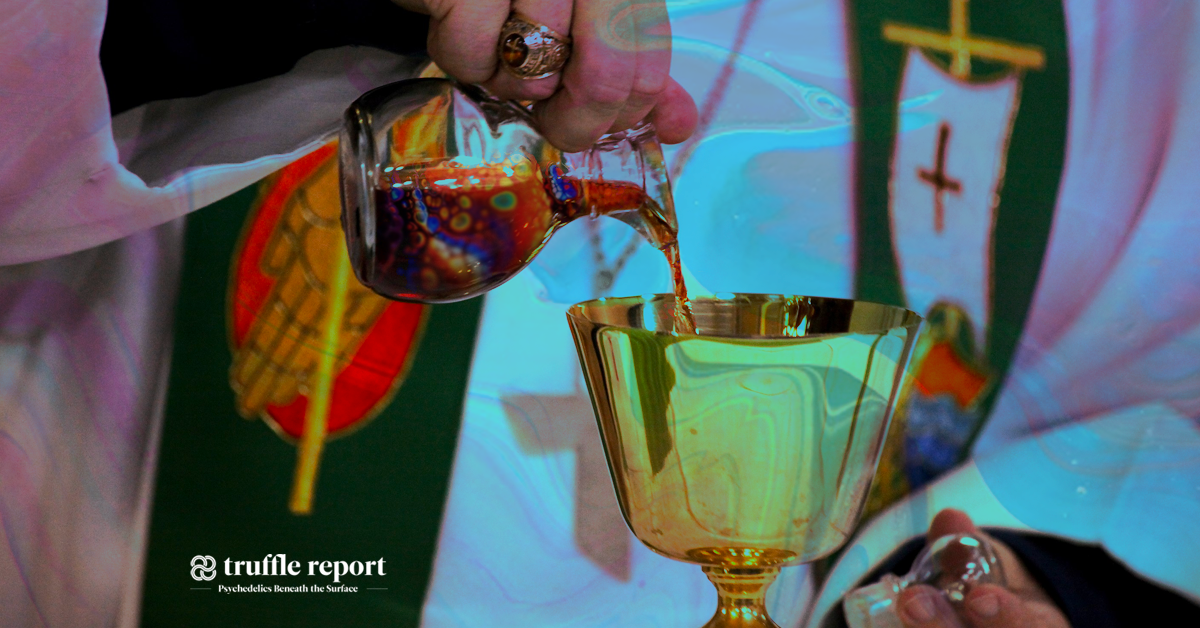 Truffle Report Looks at the Growth of Psychedelic Spirituality

Santo Daime ayahuasca rituals have expanded rapidly from their South American roots over the past two decades, with legal, or otherwise exempt, houses of psychedelic religious worship popping up around the globe. While the church has been successful in getting a legal exemption to practice its sacraments in countries like Canada, the battle continues in other parts of the world like France and the Netherlands.

Ayahuasca, a hallucinogen brewed from roots and vines and traditionally drunk as a tea, has a long history of healing spiritual and physical ailments among the Indigenous Peoples of Brazil and the Amazon region. With the exception of some Caribbean and South American countries, the substance is prohibited or strictly regulated by controlled substance laws in most countries. However, Santo Daime has been fighting a long legal battle to share their religion’s interpretation of spiritual healing with other cultures.

Rev. Dr. Jessica Rochester, President of Ceu do Montreal, told Truffle Report, “The decriminalization of psychedelics and entheogens is a very complex topic [in Canada]. It requires addressing a range of issues, like heritage and religious ritual use [along with] research on entheogens and psychedelics for clinical and therapeutic use.”

Santo Daime in Canada and Around the World

Ceu do Montreal, situated in Quebec, was the first Santo Daime church in Canada to get a legal exemption from Health Canada in 2017. This allowed the church and its practitioners to legally import and consume Daime tea during ayahuasca ceremonies, without fear of law enforcement intervention. It took Rochester 17 years to go through the process and receive legal allowance to import ayahuasca into Canada.

Rochester wrote in her diary with Chacruna, “The quest for religious freedom and for the legal right to practice our religion became an epic journey. All types of challenges appeared to thwart our efforts.”

The Chacruna Institute, an institution based in Northern California with strong ties to Mexico and Brazil, focuses on psychedelic plant medicine research. It is known for its constant efforts in bridging the gap between the emerging psychedelic science field and traditional ceremonial practices.

Health Canada has denied several similar requests over the course of the past 17 years, quoting concerns over the health and safety of members and visitors, and non-diversion of the Santo Daime sacrament. The health ministry required a list of documents to ensure the safety of Canadians, including documents on the legitimacy of Santo Daime as a religion, verifications of the legal status of the church in the Canada, safe supply and importation of ayahuasca, necessary diet, as well as the medical screening of the visitors before they attended the ceremony.

At present, there are six Santo Daime churches in Canada, all of which have received exemptions in the last three years. Four are situated in Quebec, and the other two in Toronto and Winnipeg, respectively.

Santo Daime began expanding internationally during the 1990s, spurred on by Brazilian legalization of the consumption of ayahuasca in 1986. Following similar, sometimes more complicated legal procedures, Santo Daime has established centres in European countries including Italy, Germany, Austria, Spain, Portugal, Switzerland, France, and Great Britain. The centres are not just limited to Europe, having spread to Japan, Argentina, and the United States.

However, lost legal battles in other countries like the Netherlands and France continue to constrain the spread of the religion.

Rochester told Truffle, “The challenge [of reaching out] will require a multidisciplinary approach to ensure best practices [while mixing with other cultures].”