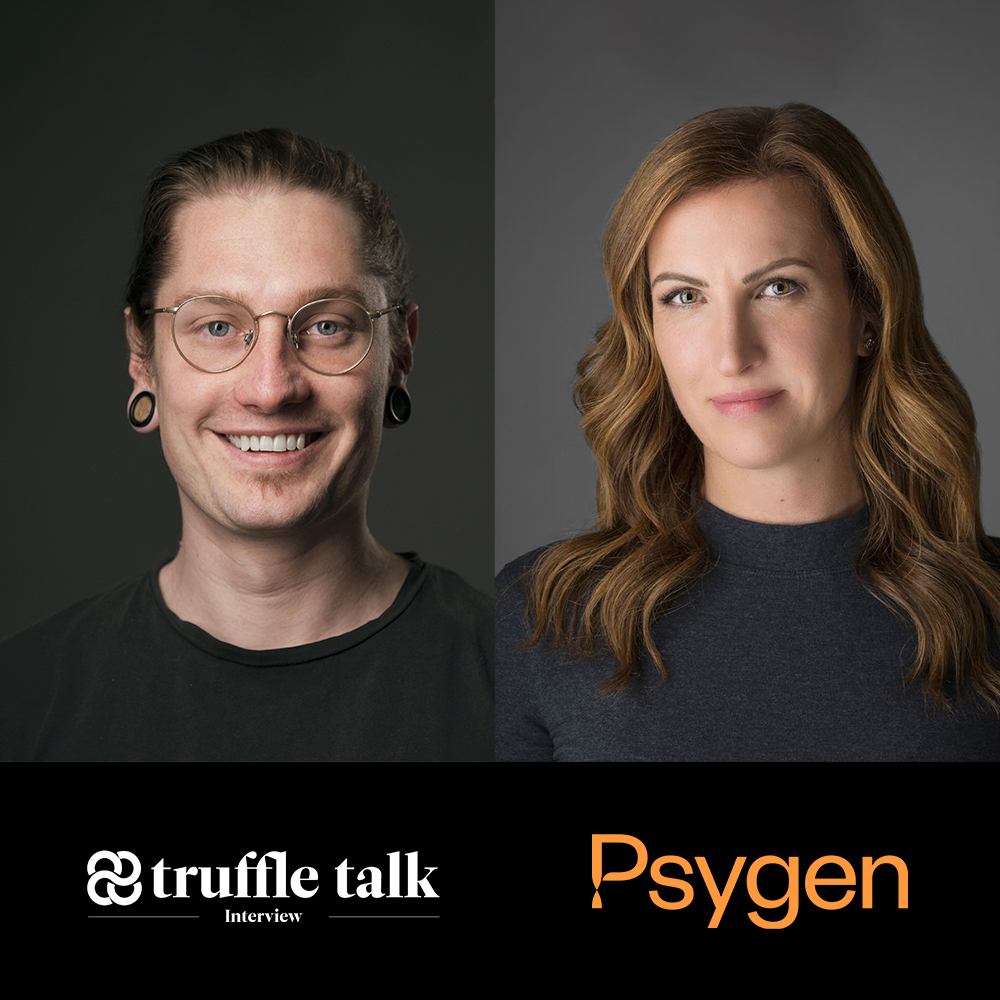 Truffle Report got in touch with Danny Motyka, CEO, and Nadia van der Heyden, Director of Sales and Marketing, of Psygen Labs to talk about manufacturing medical grade psychedelics. We wanted to know more about Psygen’s current focuses and goals, their non-exclusive basis, and their intention to go public.

Can you describe Psygen in a nutshell?

Nadia van der Heyden: We are a dedicated psychedelics manufacturer. We’re purely a synthetics lab. We’re not working with natural substances. We’re not doing mushroom extracts; we make psilocybin in a lab. Our goal is to provide non-exclusive access to any researcher, corporation, or non-profit that is looking to get material for their projects, whether it be research, or for most nonprofits who have some compassionate use programs.

Danny Motyka: We recognize that this opportunity has been built on the hard work of nonprofits and research foundations. We see the potential for psychedelics to become very cost-prohibitive, and we want to make sure that we’re supporting initiatives to ensure equitable access. All of these pieces are aspects of why we believe that Psygen is going to be successful and will stand out in the long term. We’ve got these core values that set us apart from just pure capitalistic motives while still focusing on delivering exceptional shareholder value.

Why operate on a non-exclusive basis?

Nadia van der Heyden: We’ve found that there are a couple of other companies that are manufacturing psychedelics, but they’ve tied themselves up in exclusivity agreements, which essentially locks out people from getting the research. I think it was Danny or Peter (Peter van der Heyden is the Chief Scientific Officer at Psygen), who said that “when everyone is successful, the whole industry is successful.” There’s going to be some competition and IP, and all that stuff, but we feel that the more people and the more researchers that have access to this material, the faster we can move forward.

Why produce only synthetics?

Danny Motyka: When you’re talking about a medically approved product for the FDA or Health Canada, it’s critical to have a known impurity profile in a drug product. And when you’re starting from a natural product, there are so many impurities in extraction that it’s more efficient to just start with a chemical synthesis isolated at 99.9% pure drug product versus starting from a natural product like a fungus. It would take a lot of biomass to get the same yield, and it would take a lot of downstream processing to purify the compound to a level that would be acceptable for market authorized drug products.

Can we expect novel compounds from Psygen?

Danny Motyka: We have a couple of novel compounds that we’re interested in producing. When our R&D lab is up and running, we’ll start to kind of tinker. But certainly, our core business is to produce the well-known psychedelics and make compounds that are existing already in the literature. Assuming that we are able to produce some novel compounds, we’ll look to secure that IP, and then we’ll likely look for a clinical research partner that would help take those drugs to market. We’re not going to be formulating drug products initially ourselves. We’ll be looking to partner with a third-party CMO that can help produce drug products for us and our customers.

Tell us about your manufacturing process, clients, and protocols

Nadia van der Heyden: We have a pretty good list of clients that we’re already working with. We’ve already shipped a certain amount of material to multiple clients, about seven or eight orders. We have many more to come in the next coming weeks, and we did that through a pilot project with a Canadian university, which is wrapped up. We’re now waiting for our commercial facility to open, which should be completed in June. We’ll have our dealer’s licence around the same time, and we intend to start production in July at a higher scale.

Danny Motyka: We’re open to selling to anyone who’s authorized to possess. Initially, that will likely only be scientific researchers. But like Nadia was saying, there are some patient advocate groups, like TheraPsil, for example, in Canada, who are supporting patients in getting authorizations from the health minister to access psilocybin directly without a clinical trial. So as long as our customers have those exemptions, then we will supply them as well.

Nadia van der Heyden: We have clients all over the world. A third of our clients are international, but most of them are in Canada. There are not many people in the space manufacturing these products. There may be groups that will be able to do it in the future but if they are needed in the next few months or even within the year, it may be too far along for another company because they have to develop the whole protocol, they have to potentially build extra lab space, or they may be competing for lab spaces with other projects these labs are doing. Having a dedicated space and having this material available to them is very exciting, and hearing that we’re not tied up exclusively with another client is appealing to them.

Danny Motyka: A big part of it is that we need to raise quite a lot of capital to execute our strategic vision. We would have preferred to stay as a private company and build value, but it’s been proven quite difficult in Canada to raise private capital, and there’s so much interest in psychedelics deals right now. There’s a lot of money being thrown into deals that are liquid. We figured that the best thing for Psygen’s growth and would be to go public in Q2.

How does the company plan to scale up to meet demand as laws change?

Danny Motyka: The facility that we’re building is about 6000 square feet of production. We’ve got about double that space in our warehouse to evolve our production capacity. Based on our market projections, our existing facility will be sufficient to supply-demand up to 2024 or 2025. We’ll have ample time to start designing the automated production systems that we would need to upscale our batch sizes to be able to produce hundreds of kilos of psilocybin a year instead of tens of kilos.

Plans for the future?

Danny Motyka: We envision a world where psychedelic-assisted psychotherapy is expanded to a wellness market, and psychedelics can be used as preventative medicine to help keep people healthy, instead of just as a medicine that’s applied to people who suffer from depression or from post-traumatic stress disorder. Psygen’s actively developing our clinical research plans, and we’re going to be bringing an LSD drug product to market in the future. Our goal is to be able to apply those macrodosing and microdosing products to a market that is not gated by a physician, where healthy normals have agency over their lives to choose what substances they’re using and on what frequency.