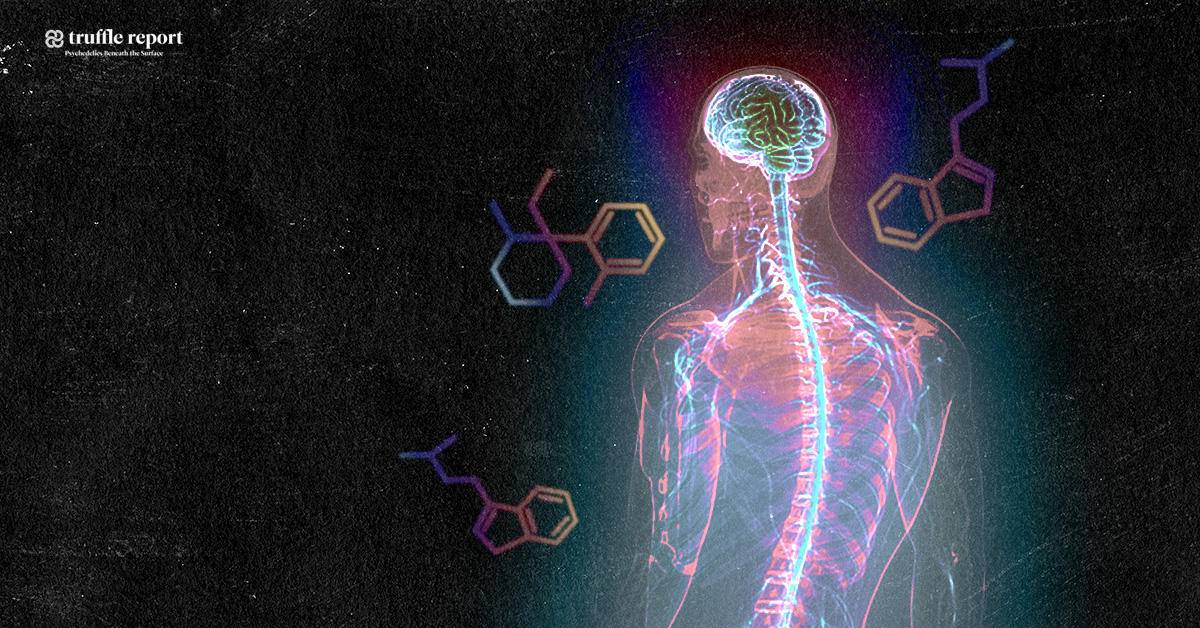 Psychedelic research is helping to place a new emphasis on mental health issues such as depression, anxiety, addiction, and PTSD, but what about physiological conditions? It may seem that most of the currently active psychedelic studies and funding from the public and private sectors involve more obvious psychological indications, but the potential of these substances doesn’t end there. Truffle Report looks at anecdotal evidence and ongoing psychedelic research into Amyotrophic Lateral Sclerosis (ALS), also known as Lou Gehrig’s Disease.

ALS, or Lou Gehrig’s Disease, is a progressive and fatal neurodegenerative disorder that attacks neurons in the brain, brain stem, and spinal cord, and disrupts and damages control of muscle movements. Without motor neurons, muscles become weaker due to non-use, resulting in difficulty speaking, moving, chewing, swallowing, and breathing, all of which eventually results in death.

ALS usually occurs between the ages of 40 and 70, although it can be developed at a younger age. According to Johns Hopkins Medicine, ALS affects more than 30,000 people in the United States, with more than 5,000 new cases diagnosed each year, and is responsible for five of every 100,000 deaths in people aged 20 or older.

The disease was first described in 1869 by the French neurologist Jean-Martin Charcot but received more sustained attention in 1939 when it ended the career of one of baseball’s most famous players, Lou Gehrig.

ALS can be sporadic and familial. According to Mayo Clinic, genetics are responsible for ALS in 5 to 10 percent of patients. For the rest, the cause is unknown. Familial ALS (FALS) means that there is a 50 percent chance a child will inherit the gene, and may potentially develop the disease. Although the cause is not completely understood, research suggests that ALS results from a combination of environmental and genetic factors.

Signs and symptoms of ALS vary from person to person, depending on which neurons are affected. It generally starts with muscle weakness that spreads and gets worse over time. The symptoms are so subtle from the beginning that they are usually overlooked. The symptoms include:

When ALS gets worse, the symptoms can include:

Given the short life expectancy of ALS patients and the nature of a disease, it is extremely difficult to develop a cure or effective treatment for the illness. Generally, existing treatments are designed to help control symptoms, prevent complications, and ease a patient’s suffering as much as possible.

There are currently five FDA-approved pharmaceuticals for ALS treatment; Radicava, Rilutek, Tiglutik, Exservan, and Nuedexta. Although these drugs demonstrate effectiveness at reducing symptoms, they fail to have any effect on slowing disease’s progression or improving survival rates. The typical life expectancy for a person with ALS is three to five years.

Currently, there is no cure for ALS.

An ongoing international non-clinical pilot study is looking at how ayahuasca can be used to treat people suffering from ALS. According to the study, people participating in the ayahuasca ALS treatment report a “wider range of movement, weight gain in muscle mass, muscle tension relief, reduced spasticity and improved strength in affected limbs.”

One participant said, “I have made essentially a full recovery, slow but persistent, and the NHS consultants involved are mystified. Ayahuasca seems to me to have been instrumental in my recovery, which is fully documented. I am now fully healthy, I cycle to work. Now, after today doing a nine mile coastal walk for the pleasure of it, I feel pretty much up to snuff, for a man of my age.”

Another one reported that her ayahuasca treatment improved her mother’s “facial structure and expression.”

“With this treatment, it corrected her mouth structure and jaw muscles. She became able to move one of her legs which was contracted before I increased the medication. It helped her to expand her right leg movement and to regain control over her feet, keeping them together. Treatment seemed to improve her memory, making her recognize and remember characters when she was watching TV. Her speech was impaired from ALS but she was able to use sign language to communicate with me,” she said.

In August 2021, Sara McDonald, an ALS, disability, and psilocybin advocate, was granted an exemption from Health Canada to treat ALS with psilocybin.

“While I make these constant shifts as my body weakens in phases, my emotions fight against these changes. So why wouldn’t I want to access a treatment that can improve my emotional sense of well-being for my remaining time?” she wrote. “I believe that psilocybin-assisted psychotherapy can help me to gain perspective regarding my future and create greater self-awareness and sense of connectedness. The research is solid and feedback from participants is extremely positive. I am grateful for TheraPsil… for providing this opportunity.”

In October 2021, McDonald posted an update to her blog stating that she experienced “the most peaceful and serene feeling that I have ever felt” after undergoing a psilocybin trip in early September.

PharmaTher, a biotechnology company focused on the research and development of psychedelic pharmaceuticals, entered into an agreement with The University of Kansas (K.U.) in March 2021 to allow it to develop and commercialize ketamine in the treatment of ALS.

According to PharmaTher’s press release, “ketamine has the potential to effectively increase life expectancy of those with ALS at any stage and slow the progressive loss of muscle associated with poor outcomes of the disease. Ketamine works by blocking the action of the ionotropic glutamate receptor, the NMDA receptor. Unlike other inhibitors of NMDA receptor function, such as riluzole, ketamine dampens NMDA receptor-related glutamate excitotoxicity indirectly. Further, ketamine can lower D-serine concentrations intracellularly and also partially activates dopamine receptors. Collectively, these mechanisms of ketamine contribute in part to the drug’s neuroprotective effects which may extend to the motor neurons targeted in ALS.”

In August 2021, PharmaTher announced that the FDA had granted orphan drug designation for ketamine in the treatment of ALS. The FDA reviewed the research data licensed from K.U., which became the basis for the FDA to grant Orphan Drug Status.

“Receiving FDA orphan drug designation is a massive validation for ketamine as a potential treatment for ALS, and it allows us to confidently proceed in evaluating ketamine in a phase 2 clinical study in patients suffering from this life-threatening disease. This designation not only expedites our regulatory, clinical and product development plans, but also validates our belief in the potential of ketamine as a therapeutic solution for neurological disorders,” said Fabio Chianelli, Chief Executive Officer of PharmaTher.

For the rest of 2021, PharmaTher will focus on examining ketamine for ALS through the FDA Phase 2 clinical study.