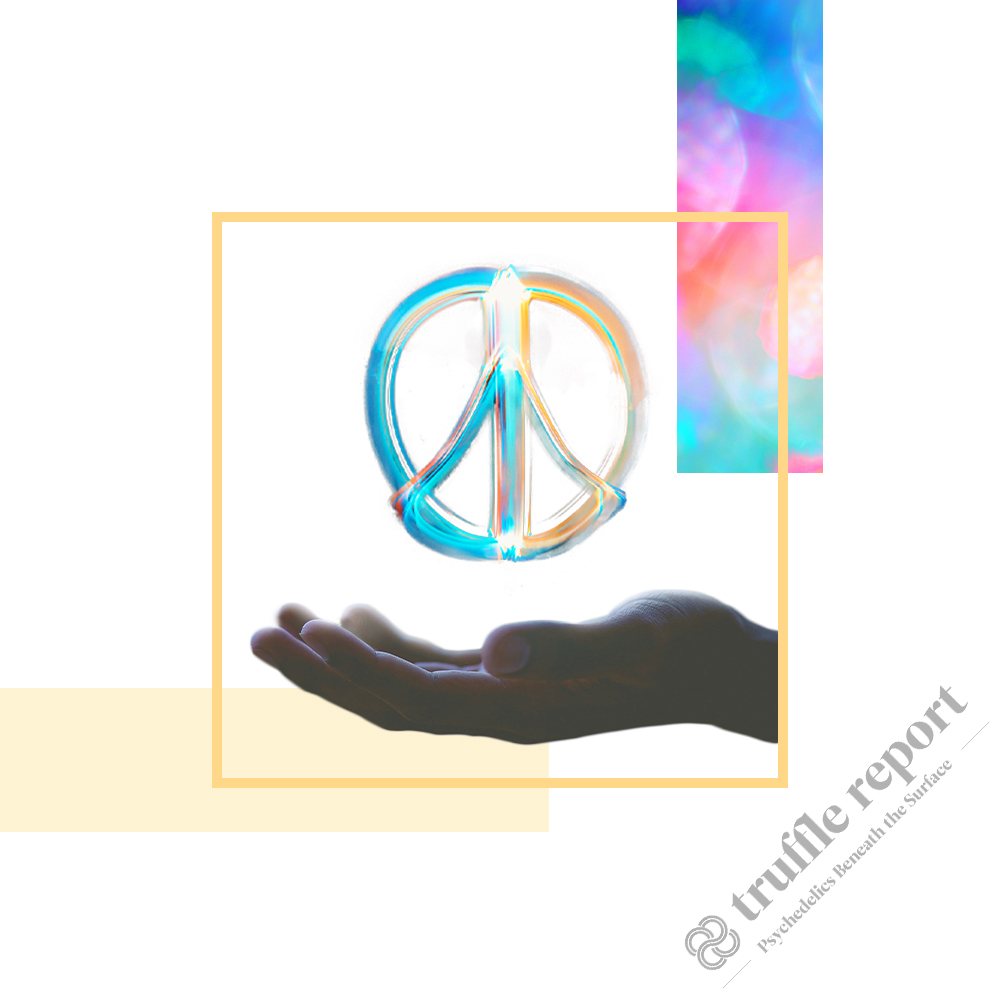 Almost since the modern western world became widely aware of them, psychedelics have been associated with hippies advocating for peace, along with the accompanying spectrum of lifestyles and political views. Beyond this immediate identification, ideas of inner peace, enlightenment, and interpersonal bonding permeate psychedelic culture. Why are psychedelics so intertwined with ideas of peace on an emotional level? How do they contribute to a peaceful mindset? First we have to pin down just what that means.

A peaceful mindset can be defined as having a calm state of mind, free from agitation or disturbance. In quantifiable terms, this often involves emotional openness and awareness, which in turn contribute to an individual’s ability to process and heal trauma.

Psychedelics promote a heightened state of consciousness, which can contribute to enhanced emotional awareness. Brain scans of healthy volunteers on LSD, ketamine, and psilocybin revealed more random brain activity than normal. The shift in brain activity was also accompanied by many interesting sensations, including everything from visual distortions, dissociation, floating sensations, and —most importantly— feelings of profound inner peace.

The scans also found that the most relevant effects were localized in parts of the brain that are largely related to perceptions rather than language or movement. This may explain why psychedelics produce consciousness expansion and tend to be associated with enhanced emotional awareness and inner peace.

Mindfulness exercises, meditation practices, and psychedelic experiences can positively affect a person’s emotional process in very similar ways. They all increase the ability to be fully present in the current moment rather than ruminating on the past or being anxious about the future. Being present, as trivial as it sounds, is incredibly important in moving on from negative emotions, releasing rigid thought patterns, and to the experience of inner peace.

For example, a study published by the Journal of Psychoactive Drugs showed that a single psilocybin session can help people let go of negative thought patterns that hinder them from living up to their full potential. It can promote creative thinking and empathy, giving people a break from ruthless self-criticism and judgement by increasing their emotional openness and awareness.

The same study also showed that the participants carried over the experience into their daily lives, helping them be fully present and break free from their harmful patterns, or avoid becoming entangled with stress and negativity. This might be because psychedelics, like mindfulness meditation, have been found to decrease activity in areas that process fear, and can also have a significant impact on empathy.

A growing number of studies suggest that psychedelic drugs have a deep and lasting positive impact in people that choose to use them. They have been used in multiple clinical trials to treat many different afflictions including depression, anxiety, and PTSD with great success. Both clinical and anecdotal evidence also suggests their potential to treat trauma.

According to Matthew Johnson, PhD, associate professor of psychiatry at Johns Hopkins University School of Medicine, and principal investigator of multiple psychedelic research studies, it’s not just the direct effects of psychedelics on the brain that make them so effective. To him, it’s also the fact that psychedelics speed up the process of dealing with and healing from trauma. Instead of many sessions of psychotherapy before seeing any results, just two or three psychedelic-assisted therapy can provide significant relief.

The fast acting nature of psychedelics has to do with the fact that these substances are thought to flood the brain with hormones and neurotransmitters that evoke feelings of trust, promoting emotional openness. This means that a patient who has been administered a psychedelic drug would open up faster to their therapist about their deep-rooted issues, which would allow them to deal with trauma more quickly and effectively.