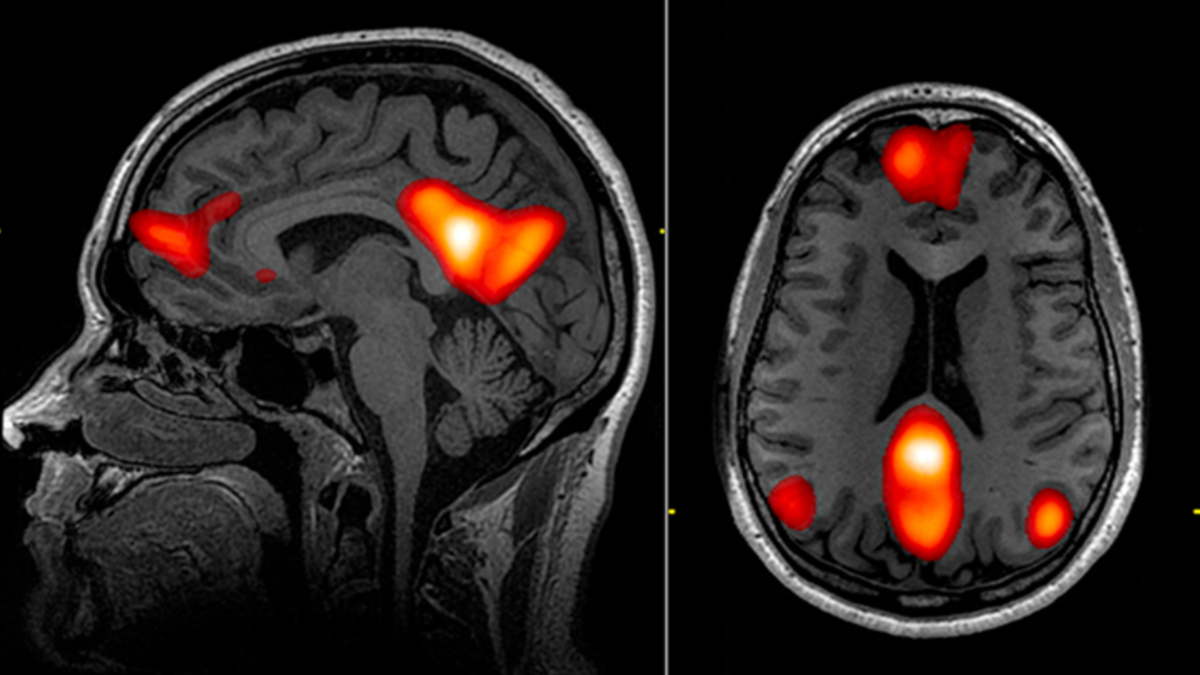 Picture this: After a long day of work, followed by an equally strenuous time at home making a quick meal, finishing up the dishes, and doing all the laundry you’ve been neglecting, you finally climb into bed, exhausted. Despite how tired your body is, your brain has other plans than sleep. You spend the next hour staring at the ceiling, pivoting between daydreaming, feeling stressed about all of the tasks tomorrow demands, and worrying about the event’s of the past day.

We’ve all been there: Those periods of thought where the world around us fades away and we focus on introspection and self-reflection happen every day. Sometimes this type of thinking can be helpful, but other times, like when you’re trying to fall asleep, or feeling anxious or depressed, they’re anything but. Using scanning techniques, researchers have begun to isolate the regions of the brain that are active in this type of thinking, labelled the default mode network (DMN), and also theorize what this network is used for.

But there’s another crucial piece of the neurological puzzle that is the DMN: psychedelics are emerging as a key tool to understand the network, and could even help us understand how to reduce the power of the DMN when it’s being unhelpful. At the forefront of this research is Dr. Robin Carhart-Harris, head of the Centre for Psychedelic Research at Imperial College London. Carhart-Harris was also a crucial source in Michael Pollan’s 2018 bestseller How to Change Your Mind, which traced the history of psychedelic research and outlined the ways substances like LSD, psilocybin, and mescaline are being used to explore everything from depression and addiction to consciousness and death.

The World Inside the Default Mode Network

The DMN was first described in a 2001 paper published in the journal Proceedings of the National Academy of Sciences by Washington University neurologist Marcus Raichle. The network began to materialize when Raichle noticed that parts of the brains (now known as the DMN) of his research volunteers showed increased activity inside the fMRI scanner when they were doing, well, nothing. “Raichle had discovered the place where our minds go to wander — to daydream, ruminate, travel in time, reflect on ourselves, and worry,” Pollan writes.

Another paper published in the journal Annals of the New York Academy of Sciences seven years later defined the DMN as being active when people “are not focused on the external environment.” More specifically, the authors write, “when individuals are engaged in internally focused tasks including autobiographical memory retrieval, envisioning the future, and conceiving the perspectives of others.” Some of the key structures of the network have now been identified as the brain’s medial prefrontal cortex, posterior cingulate cortex, inferior parietal lobule, lateral temporal cortex, dorsal medial prefrontal cortex, and the hippocampus formation.

While the network might sound meagre on the surface, recent research suggests the DMN plays a crucial role in everyday life and uses a sizable chunk of the brain’s energy. Carhart-Harris has described the network as the brain’s “orchestra conductor,” “corporate executive,” and “capital city,” Pollan writes. In a 2010 Scientific American article, Raichle outlined a hierarchy of electrical signalling in the brain with the DMN at the top rank, acting as an “uber-conductor to ensure that the cacophony of competing signals from one system do not interfere with those from another.” Similarly, Pollan writes that the DMN also functions as a valve, letting in just enough of the necessary stimuli — or information — from the outside world to allow us to get through everyday life.

The Tripping Brain and the Ego

So what happens to the DMN when someone ingests psychedelics? That’s a question Carhart-Harris is hoping to answer. At its heart, his work focuses on visualizing the impacts of the psychedelic experience on the brain. The approach itself is simple: Carhart-Harris injects volunteers with LSD or psilocybin and then puts them inside a functional magnetic resonance imaging (more commonly known as an fMRI) or magnetoencephalography machine, where he can watch a trip unfold on computer screens generating images of participants’ brains. With a background in psychoanalysis, Carhart-Harris takes a Freudian approach to his work, seeing the DMN as playing a key role in the formation of the ego, or the self.

Carhart-Harris’s original train of thought was that the tripping brain would show increased activity, especially in emotional centres. “I thought it would look like the dreaming brain,” Carhart-Harris told Pollan. In fact, as Carhart-Harris’s study published in 2012 in PNAS showed, the scans revealed a drop in blood flow and oxygen consumption in the DMN. Researchers who have used scans to study the brains of experienced meditators, such as neuroscientist Judson Brewer, have found similar results.

The DMN has also been described as a network using unexplained amounts of “excess energy” in the brain, what Carhart-Harris has attributed to the network being the site of “the physical counterpart of the narrative-self or ego — much of which is indeed unconscious or implicit.” Carhart-Harris’s studies show a correlation between his participant’s self-described experiences of ego dissolution and drops in DMN activity. “It appears that when activity in the default mode network falls off precipitously, the ego temporarily vanished, and the usual boundaries we experience between self and world, subject and object, all melt away,” Pollan writes.

In How to Change Your Mind, Pollan also returns to the idea of the DMN as a “valve” limiting the amount of exterior stimuli allowed into the brain: “Taking this particular network off-line may give us access to extraordinary states of consciousness — moments of oneness or ecstasy,” Pollan writes. Carhart-Harris has written that “the unique scientific value of psychedelics rests on their ability to selectively target processes that appear to be critical for the maintenance of normal waking consciousness.”

Where Psychedelic Therapy and the Default Mode Network Could Intersect

Recent research has begun to link the DMN to a number of mental health issues, suggesting quieting the network, potentially with the use of psychedelics, as Carhart-Harris’s work shows, could be helpful.

A well-known 2010 study published in Science by two Harvard University psychologists, for example, looked into the connections between mind wandering, a key signal of the DMN at ‘unproductive’ work, and unhappiness. For the study, the researchers developed an iPhone app that asked participants to provide real-time reports of their feelings, actions, and thoughts throughout the day. The researchers not only found that mind-wandering was extremely common, but also showed a strong correlation between unhappiness and mind wandering.

In both schizophrenia and depression, the DMN is often hyperactive and hyperconnected, according to a 2012 article in the Annual Review of Clinical Psychology. In schizophrenia, this could be tied to “overly intensive self-reference” along with impairments in attention and working memory. In depression, DMN hyperactivity is thought to be tied to negative rumination. Some scientists and psychologists theorize that psychedelics can be helpful in exploring deep-seated emotions, memories, and trauma, Pollan writes, because when the “orchestra conductor” that is the DMN is toned down, activity in other parts of the brain is allowed to increase.

Carhart-Harris unified his theories on the links between psychedelics, psychoanalysis, consciousness, mental illness, and the DMN in a landmark 2014 Frontiers in Human Neuroscience paper. In that paper, Carhart-Harris compares the brain to a system of entropy, which is helpful to think about in terms of flexibility and order.

In one graphic included in the paper, Carhart-Harris links higher entropy to more disordered and flexible states of thinking (including the psychedelic state, infant consciousness, REM sleep and creativity) and lower entropy with less disordered and more rigid types of thinking (including deep sleep, sedation, depression, obsessive-compulsive disorder, and addiction). Normally, the waking consciousness of healthy humans can be placed near the middle of this spectrum, slightly more toward lower entropy states.

For Carhart-Harris, mental health issues at the lower entropy states may be a result of an excess of order, “when the grooves of self-reflective thinking deepen and harden” and “the ego becomes overbearing,” Pollan writes. Psychedelics could be helpful because of their ability “to disrupt stereotyped patterns of thought and behaviour by disintegrating the patterns of activity upon which they rest,” Carhart-Harris writes.