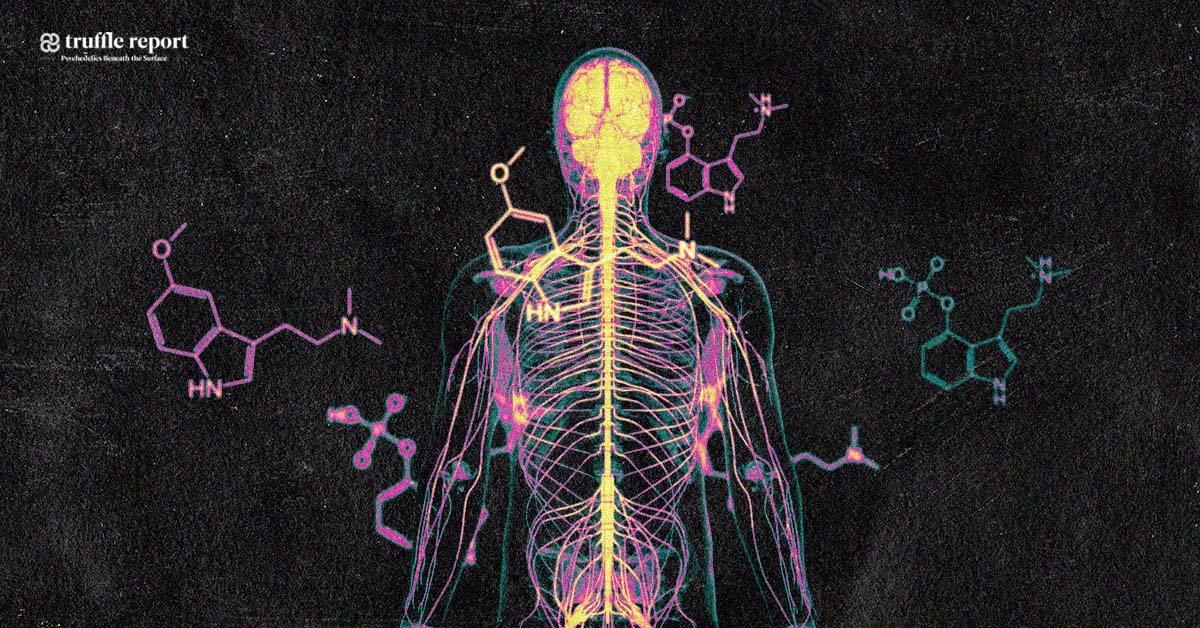 In recent years, research has shown that psychedelic drugs offer new and exciting potential treatments for various physical and mental health conditions. One promising area is the use of psychedelic-assisted therapy to treat Parkinson’s Disease: a progressive neurodegenerative disorder that occurs when the nerve cells in the brain that control movement stop working or die. Truffle Report has put together a brief review of prospective treatments and clinical trials involving psychedelics and Parkinson’s Disease.

More than 10 million people worldwide live with Parkinson’s. While both men and women can be diagnosed with the disease, this condition affects 50 percent more men than women.

Common symptoms of the disease include tremors, muscle stiffness or muscle rigidity, slowness of movement, dry mouth, and difficulty walking or talking. It can also lead to Parkinson’s dementia, cognitive impairment, sleep problems, and mental health issues such as depression and anxiety.

Sadly, there is no cure for the condition. The range of disease symptoms a person with Parkinson’s can experience makes standardizing medical treatment protocols challenging. Current treatments include medications and drug therapy, and supportive therapies such as physical therapy or speech therapy, surgery, and lifestyle modifications.

However, several psychedelic drugs have shown therapeutic effects when it comes to improving the daily life of Parkinson’s patients, including DMT, ketamine, psilocybin, and LSD. This research offers promise for much more than psychedelics and Parkinson’s disease, and could also lead to breakthroughs in other neurodegenerative diseases and movement disorders through psychedelic-assisted therapy.

DMT — Could this Psychedelic Drug be a Possible Treatment for Parkinson’s Disease?

Off the back of new research, there is speculation that DMT could be used to treat neurodegenerative disorders and neurological diseases, such as Parkinson’s or Alzheimer’s Disease.

A 2020 preclinical study using mice found that DMT stimulates adult neurogenesis — the growth and development of new nerve cells in the brain — and improves spatial learning and memory tasks. Researchers concluded: “[DMT’s] ability to modulate brain plasticity indicates its therapeutic potential for a wide range for psychiatric and neurological disorders, among which are neurodegenerative diseases.”

In addition, Vancouver based-biotechnology company Akome Biotech, a wholly-owned subsidiary of Core One Labs, believes its psychedelic drug formulation can be used to treat Parkinson’s. The company’s preliminary research shows that its DMT formula, known as AKO004, can counter or mitigate neurodegeneration.

While both of these developments are promising, we will have to wait until more research is completed to know for sure if DMT could become a viable treatment option for Parkinson’s.

A standard and effective treatment for Parkinson’s. is the drug levodopa which helps patients replenish their brain’s supply of dopamine. However, a common potential side effect of this treatment is levodopa-induced dyskinesia (LID): involuntary movements such as rapid jerking and twisting, which can range from inconvenient to incapacitating. This condition, once established, is difficult to treat and can adversely affect a patient’s quality of life.

But there is a growing body of research that shows low doses of ketamine may have beneficial effects in reducing the effects of LID. A 2016 study found patients displayed a “prominent and prolonged” improvement in LID following ketamine infusion. The authors concluded that low-dose ketamine might act as a “chemical deep brain stimulation” and recommended further investigation into its use as a treatment for LID.

Another 2016 preclinical study using a rodent model investigated ketamine infusion for LID. While the researchers noted that an acute injection of ketamine did not reduce abnormal involuntary movements (such as those caused by LID), when ketamine was given for 10 hours, there was a dose-dependent reduction of abnormal involuntary movements. “Sub-anesthetic ketamine infusion could be a novel long-term treatment modality to reduce LID and should be further investigated,” the researchers concluded.

Building on this research, in 2021, the Food and Drug Administration (FDA) also approved PharmaTher’s Investigational New Drug application to proceed with a Phase 2 trial for ketamine as a treatment for LID. This trial is ongoing, and PharmTher says, pending positive Phase 2 results, it plans to move to a Phase 3 study in Q3, 2022.

Ketamine has also shown the potential to treat common comorbidities associated with Parkinson’s, including depression (which affects about 60 percent of all people diagnosed with the disease) and chronic pain. “Sub-anesthetic ketamine could provide a multifaceted benefit to individuals with Parkinson’s Disease in the future,” the researchers behind a 2020 study on ketamine and LID noted. A 2021 study on depressive-like behavior in animal models of Parkinson’s also found ketamine had therapeutic benefits for non-motor symptoms of the disease, including an ability to reverse memory impairment and depressive-like behavior due to its antidepressant effects.

Yale University’s Department of Psychiatry is currently recruiting patients for the world’s first clinical study evaluating ketamine for the treatment of depression in Parkinson’s. The Phase 2 trial will compare the efficacy of ketamine to placebo in about 50 individuals and will also use cutting-edge brain imaging to study the effects of ketamine on synaptic connections and functional networks in the brain. It is expected the trial will be completed in August 2024.

Announcing the trial in November 2021, co-principal investigator Dr. Sophie E. Holmes said: “The findings of this research could change the way that [Parkinson’s] is treated, leading to the discovery of fast-acting and effective treatments that in turn improve the quality of life for the many individuals with Parkinson’s Disease that suffer from depression.”

Psilocybin and LSD for Wellbeing, Depression, and Anxiety in People with Parkinson’s Disease

Two other psychedelic drugs being researched for their potential to improve the lives of patients with Parkinson’s are psilocybin and LSD. Psilocybin is especially promising, given its recently proven ability to spur the growth of neural connections and new brain cells.

One Phase 2B study based at Maastricht University in the Netherlands, sponsored by Silo Pharma, is set to evaluate the effect of repeated low doses of both psilocybin and LSD on wellbeing, emotional and cognitive attention, and biological markers of neuroplasticity. Although this study was announced back in December 2020, it is yet to commence.

Psilocybin’s potential for helping Parkinson’s patients is also being explored in a University of California, San Francisco Phase 2 trial. This trial will evaluate the effectiveness of oral psilocybin therapy for depression and anxiety for people with Parkinson’s. It is expected this study will be completed by December 2022.