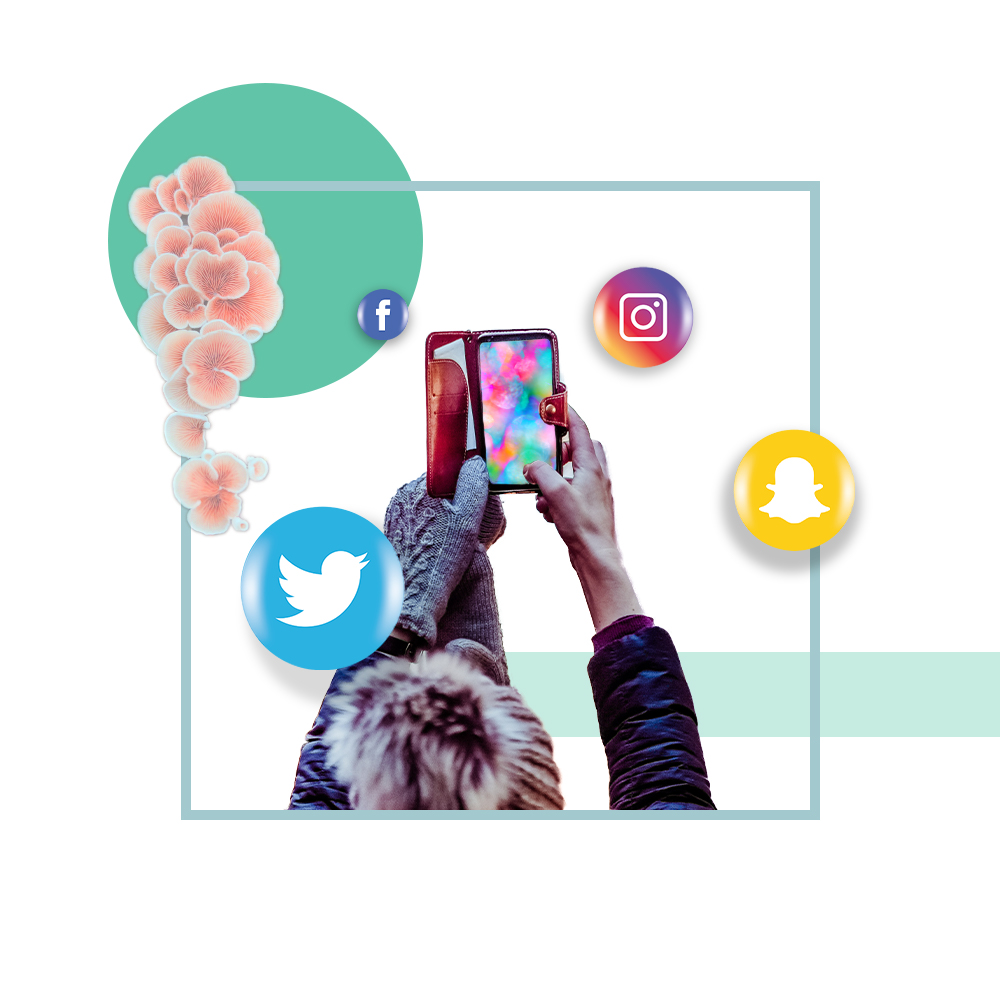 The introduction of social media platforms such as Facebook, Twitter, and Instagram has created a seismic shift in the way people interact with one another. Facebook messenger and phone calls can link people together even without the exchange of contact information. Instagram and Twitter posts keep us updated on the activities of people in our lives in a fast, streamlined way. These revolutions in communication are not without their drawbacks. Many people have begun to experience detrimental effects to their lifestyle and well-being, to varying degrees.

Even more recently, emerging psychedelic therapies seem to exist on a different frontier. Psychedelic substances are increasingly being shown to have applications in mental health care. Issues such as anxiety, depression, and addiction may soon be able to be addressed in a whole new way.

Since social media platforms have altered the way that we perceive ourselves and the world around us and psychedelic therapy shows promise in addressing psychosocial issues for some individuals, could there be a link between the two? Or could the latter be leveraged to deal with the mental health fallout of the former?

Behind the Social Veil

Seeing and sharing the big moments in our day-to-day lives certainly does have its benefits, providing us with an unprecedented means of staying in touch with family and friends. Unfortunately, a broad range of mental health issues appear to be emerging in people as a result of this constant exchange. Social media use has been linked to low-self esteem and social anxiety. Research has even suggested that it may be possible to predict depression in individuals by analyzing the length and wording of their social posts.

This can be partially attributed to the nature of the content that we’re exposed to. It’s common for people to share heavily curated images of their own lives, which may result in daily unfair comparisons to our own, unedited existence. This process perpetuates as we feel a pressure to share curated images of ourselves, possibly even engaging with posting trends to enhance our online image and feel included.

Psychedelic therapies may be relevant in curtailing a more widespread prevalence of social anxiety among the populace. Anxiety and depression are linked to an overactive default mode network (DMN) in the brain —which controls our thought processes in a resting state. Psychedelics like LSD and psilocybin are known to disrupt the DMN, thereby reducing the repetitive, self-perpetuating nature of negative thoughts that result in low self-esteem and anxiety.

Social networks have created the potential for a new wave of interconnectedness as readily-accessible online communities continue to spring up. This makes social interaction almost constant, theoretically providing ample opportunity to build stronger social skills. Unfortunately, the opposite has proven to be true for many people.

It has been found that while people may be more likely to disclose personal information within their online communities, the inverse may be true for the same individuals in their offline, personal lives. This can affect social development among youth by limiting real-life interactions that they may otherwise have engaged in. The term “phubbing” has emerged to describe individuals who forego in-person social events to engage on social media instead. In an ironic twist, people may feel more divided even as they become more connected.

Psychedelic therapy may hold significance for addressing social isolation and reduced capacity for empathy. Ego dissolution, common to the psychedelic experience, results when certain areas of the brain start working together in tandem, simultaneously becoming less organized individually. This can result in a feeling of unity —of being a part of a greater whole. Furthermore, a sense of community is perpetuated in the ritualistic psychedelic experience, as with ayahuasca or some peyote ceremonies.

One of the unforeseen impacts of the social media revolution is the habit-forming nature of posting and receiving feedback from others. Some individuals have become entirely addicted —this is a relatively small percentage of users, although it’s worth noting that these estimates are based largely on self-reporting in the absence of any standardized means for determining social media addiction.

Social media has been shown to have a dopamine-producing effect, since notifications, likes and shares seem to reach the brain’s reward centre. Addiction and compulsive adherence to social media may result because low effort is required for these dopamine rewards, tricking the brain into seeking them out more often. To make matters worse, platforms like Facebook tend to use their algorithms to determine which posts hold your attention longest and curate your newsfeed to show more such posts. These processes may combine to produce compulsive behaviour with longer engagement.

Fortunately, psychedelic therapies have shown a range of benefits for addiction and compulsive behaviour. Just as disrupting the DMN can reduce cyclic negative thinking, it has also shown potential for disrupting compulsive behaviours. Ayahuasca treatment may even be its own form of combination therapy for addiction —providing the medicinal benefits of psychedelics and the benefits of a caring, attentive community in a ritual setting.

We have already discussed how some of the great minds of the tech industry may have been influenced by past psychedelic experiences. Ironically, psychedelics may also hold relevance for dealing with the impacts of their innovations.

Social media has a wide range of personal, professional, and societal benefits, but it comes with many detrimental effects that do need addressing. Maybe it isn’t a coincidence, then, that the push for research in psychedelics has emerged so soon after the advent of the social media platform.