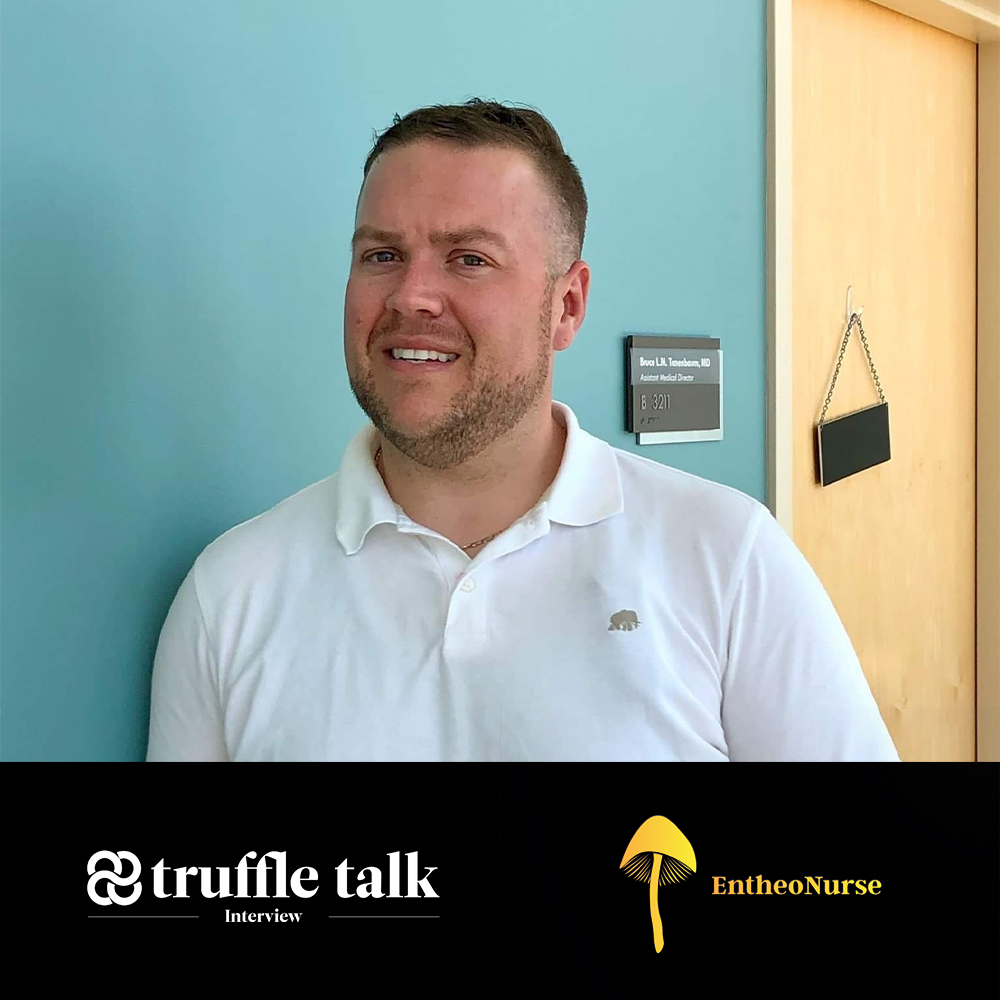 Last month, Truffle Report attempted to compile a list of benefits and side effects for a microdose regimen with psilocybin. Unlike conventional medication, psilocybin does not come with any direct instructions or warning labels —so we thought this might be a helpful reference for anyone thinking about giving microdosing a try. Following up on this, we reached out to CJ Spotswood —the EntheoNurse —so that he could weigh in and offer us his first-hand knowledge and expertise.

Can you tell me a bit about what you do as EntheoNurse?

CJ: “I’ve been presenting on psychedelics for probably about 3 years now. I’ve written a couple of master classes for Psychedelics Today’s ‘Navigating Psychedelics for Clinicians and Therapists’. I’ve also helped to co-write the psilocybin portion of the Psychedelic.Support’s continuing-ed program for medical providers — and I have a program, ‘Psychedelics and Psychiatry for Nurses’ on my website as well. I’m currently writing a book on microdosing.”

Do you often deal with patients who choose to medicate with psilocybin?

CJ: “Sometimes yes, sometimes no. It all depends. I’m a psych nurse in the emergency room and sometimes we’ll have someone come in and we don’t know why they are acutely psychotic —and once they clear up, they’ll sometimes come out and tell us. I had one patient, probably about 4 years ago with no history of bipolar. When he came out of it two days later… we discussed what had happened and he had tried using penis envy to self-medicate —which ended up kicking him into a psychotic break.”

What side effects or hurdles do you think people can expect when they microdose with psilocybin?

CJ: “Right now with microdosing, there really isn’t anything in the literature showing much about it. Low-risk, high benefit is basically what’s going on. There are no real major side effects that we know of yet. My biggest concern is that when someone is microdosing, it affects the serotonergic system… which, as we know of someone who has bipolar disorder or psychotic disorders, could kick them into a manic episode or kick them into a psychotic episode. We see that with antidepressant medications for people with the same thing, so it’s one of the things to be mindful of.”

“One of the other major concerns that we don’t know much about pertains to psilocybin and LSD specifically, when they work on the serotonergic system. One of the main receptors we look at is the 5HT-2A receptor but it also affects the 5HT-2B receptor, which has cardiogenic effects, so it affects the heart. There are some medications that came out a few years ago —Fen-phen was one of them, a weight loss drug. It affected the 5HT-2B receptor, causing abnormal growth in the heart. This could be a concern but we just don’t know yet — the research is not out there.”

CJ: “In the literature there has never been any cases of that when using both of them concurrently. I’m not going to say it absolutely can’t happen, there’s always that possibility. Medications like SSRIs that have been out since the early 90s and we haven’t seen many cases of it though. Some may actually attempt to use them concurrently if they are already taking SSRIs, in order to avoid the nasty side effects and withdrawal that can occur after extended use. More of a concern would be if someone was taking multiple SSRIs or SNRIs, which are serotonin-norepinephrine reuptake inhibitors. If you’re taking a few of those, problems are documented quite often. But for instances with psychedelics, there aren’t many cases of this out there.”

“Some have reported that SSRIs may actually blunt the effect of psychedelics. Since sustained SSRI use causes serotonin to linger in the system, serotonin receptors may downregulate more to compensate for this. This can happen because most antidepressants work on the 5HT-1A receptors. Again, this is mainly based on anecdotal reports.”

“There are other medications I would be more concerned with. The MAOI antidepressants, which are older —their action is to stop the breakdown of the serotonin so it can build up. These kinds of medications should not be used with ayahuasca because it can be life-threatening and lead to serotonin syndrome. Ibogaine is another drug to worry about, since it can result in severe cardiac conditions when used alongside psychedelics. Antipsychotics — which also act on 5HT-2A receptors and can have an antidepressant effect —may blunt the effect of psychedelics. It’s important to be aware of any drug interactions beforehand. There’s just not any research out there for SSRIs and SNRIs and psilocybin causing serotonin syndrome.”

When you read “The Side Effects Label” article —which was based largely on anecdotal reports —were there any other inaccuracies you noticed?

CJ: “I really didn’t —when I read through it, it looked pretty good. It was just that one instance pertaining to serotonin syndrome, which is something many people are concerned about. I think it’s a healthy concern because it always could happen, but there just isn’t any published literature on it.”

Based on your research and experience, what side effects should one look out for when microdosing with psilocybin?

CJ: “In the course I just finished teaching on microdosing, some of the big concerns are: what kinds of changes are occurring? Activating the serotonin system can have an effect that is kind of like an upper —it can have an effect like coffee where it speeds up metabolism. If someone is taking it too late in the day, they might not be able to sleep and that can throw things off. Some people can take it and go to sleep, it all depends. If it really throws people off too much, I think that’s the biggest drawback.”

“In my course, I really encouraged journalling and following a protocol to figure out what your dose is. If you have a uniform dose ground up in capsules, you know the amount you’re taking and you can dial in your dose much easier.”

“Some other concerns are that it can cause nausea because it affects serotonin receptors, which are in the gut. It’s one of the common side effects you see in antidepressants as well. Some of the suggestions I offer people is to make it into tea or do a lemon tek which helps it break down so it’s not so hard on the gut. Ginger, things like that. If you take it on an empty stomach, it could be a little harder on you and hit your system quicker as well. It’s kind of about dialing into what the correct, uniform dose is.”

Do you feel that there’s any concern with microdosing psilocybin and consuming alcohol and caffeine?

CJ: “Is it going to be life-threatening or lethal? Probably not. It might cause problems if you start mixing all of those things in while you’re doing a microdose protocol and you’re trying to figure what your dose is. If you add caffeine to psilocybin, you have two stimulants at the same time. If you’re too jittery…is it the coffee, the psilocybin, or both? If you’re taking it with alcohol you may feel more sluggish all of a sudden. They can make it harder to dial in and figure out your correct dosage.”

So it makes it more challenging to know what you actually need and it mitigates the effects?

CJ: “Yeah. When I talk to people and discuss caffeine intake, I advise them to go without it for a while. If you realize it’s not stimulating enough, you can drink coffee again —but it might be stimulating enough that you don’t need it. It’s about figuring out what’s good for you.”

What does the future look like for research into psilocybin microdosing? Do you think we can expect to see a more “official” side effects label soon?

CJ: “There’s two different parts to that question, since I’m guessing a large part of your audience is both in the U.S. and Canada. Canada is basically allowing it right now and there’s a much more open market. I don’t know how much research is going on along with this, but you’ll have a lot more anecdotal evidence. I know Imperial College in London is doing a lot of research right now as well. I’m hoping for more answers, but a lot of the research is driven by money — and there’s not a lot of money in uncovering the answers we need right now. I don’t know what you’re going to see that’s much more substantial than anecdotal evidence. It’s tough and it sucks —but at the same time, when you start doing big research and getting more people involved, it kind of dilutes the studies as well. It’s kind of a catch-22.”

Before we wrap up, is there anything else you’d like to add for people who want to microdose with psilocybin?

CJ: “One of the great resources for medications and side effects is Spirit Pharmacist. Ben Malcolm is a pharmacist in California and his wife is a psychedelic therapist — they run a program together called ‘Psychedelic School’. I use a lot of his work as a reference for my work. It’s a really good resource.”