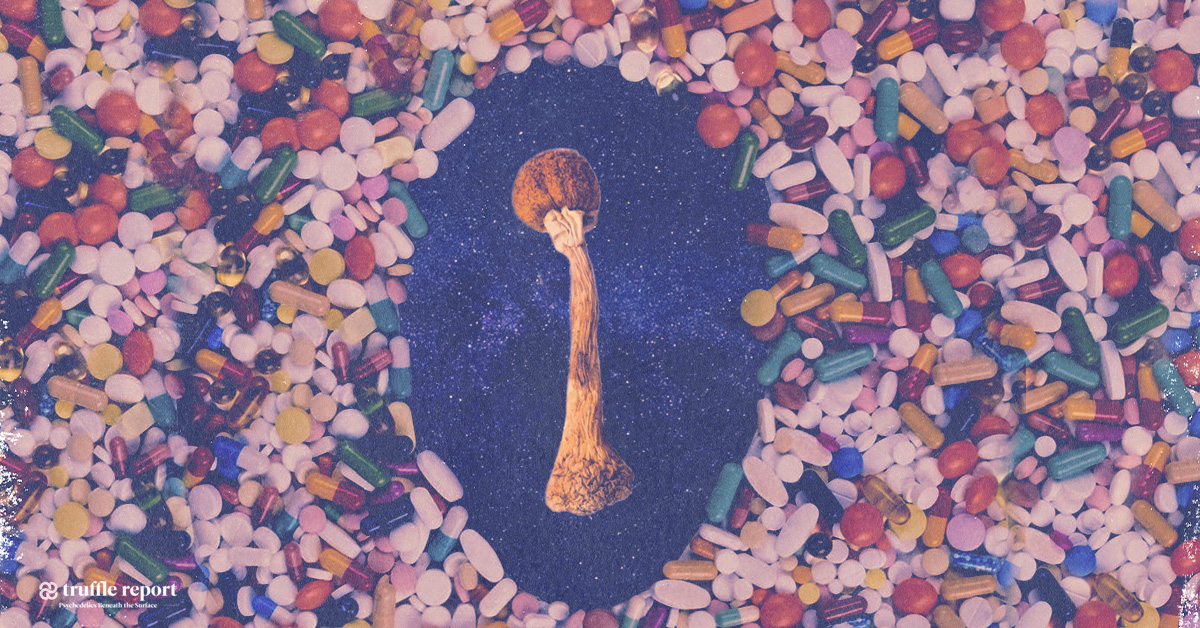 Ayahuasca — a South American entheogenic brew used as a sacrament —initially became a subject for Western research in the 1850s when Richard Spruce and Manuel Villavicencio, who stumbled upon ayahuasca and ayahuasca ceremonies in the Amazon, first wrote about it. Villavicencio described the experience as a “flying journey”, while Spruce, an English botanist, sent a few specimens back to the Royal Botanical Gardens at Kew in London.

Villavicencio, an Ecuadorian botanist, wrote almost two hundred years ago, “It is a vine which the [Indians] use to guess, predict, and answer correctly the difficult questions.” He continued, “After the last dream gathers up the memories that were in the visions, it shows you the decision you should make…To the Indian who drinks it [ayahuasca], should be given the answers…the rarest of phenomena.”

There were other botanists making discoveries around psychedelics during that period of time, “yet mysteriously,’ Justin Williams, a research scholar at the University of Colorado, writes in his paper published in 2015, “ayahuasca vanished for nearly one hundred years, until its reemergence in the late twentieth century.”

This reemergence was preceded by the scientific discovery in the 1960s that DMT (N, N-dimethyltryptamine) was responsible for producing the hallucinogenic effects in the ayahuasca brew, reviving the interest of scholars. DMT at that time was known as a synthetic (since 1930), until its identification as a naturally occurring compound in 1955.

Meanwhile, an article published in Life Magazine in 1957, titled, ‘Seeking the magic mushroom’ worked as a catalyst in reviving Western interest in psychedelic substances. Within two years, psilocybin and psilocin — the main hallucinogenic compounds — were ‘isolated, characterized, synthesized’. The extraction was named Indocybin and quickly patented by the Swiss company Sandoz Pharmaceutical as a therapeutic tranquillizer.

Decades later, we are in the middle of a psychedelic renaissance — a second wave revival of the scientific and cultural awareness around psychedelic substances. Ayahuasca, for instance, has gained global recognition in the last few years, and countries like Peru have become international tourist destinations for those attending scores of new-age healing retreats. Scientists, on the other hand, are working hard to prove the therapeutic potentials of psychedelics in clinical settings, while Big Pharma stakeholders are racing to patent components of psychedelic extractions in the hope of reaping profits and establishing new monopolies when the substances become legally available.

In all this, there’s a huge blindspot: understanding, respecting, and reciprocating Indigenous knowledge and their relationship with entheogenic substances.

Alarms are being sounded by activist groups, claiming that the growing demand for naturally-occurring psychedelic substances like ayahuasca in treating mental health issues without respecting Indigenous rights can lead to issues with the local environment in the Amazon, while harming the sustainability of its existing ecosystem.

“The context of the political and economic systems in which the ‘psychedelic renaissance’ is emerging depends on the extraction of resources and exploitation of labour from the Global South, and produce accumulation of wealth and profits into a small number of hands,” Bia Labate, founder of Chacruna Institute, tells Truffle Report. “There is a lack of historical and cultural awareness,” she adds.

It has become a moment of creating value for the substances in the Western context. Anjali Vats, Associate Professor of Law at the University of Pittsburgh School of Law and the author of The Color of Creatorship, mentions in the first part of this series that scientists are not attempting to negate the existence of knowledge but are trying to create a value “in a harmful way.”

“There’s no inherent value in an ocean. But we can extract value by fishing – and without limits, we destroy our coral reefs and the ecosystem.,” says Steven Huang, the Justice, Equity, Diversity, Inclusion Consultant with MAPS.

With psychedelics, he says, “Now, White people want it. The Indigenous groups, meanwhile,” Huang continues, “would mostly do it in social settings, where you have a relationship with medicine, where there’s the life force that you exchange.”

In the language of intellectual property law, Traditional Knowledge, or TK, can be defined as ‘a network of knowledge, beliefs, and traditions intended to preserve, communicate, and contextualize Indigenous relationships with culture and landscape over time.’ In a narrower understanding, it is the legal regime defined under the International Labour Organization Convention 169.

We have to note that the therapeutic use of psychedelic substances like ayahuasca and psilocybin is not a new discovery. Rather, the existence of traditional knowledge among Indigenous peoples has existed for centuries.

“What we see most often is Western scientists don’t pay attention or are not interested. Some don’t even know that psilocybin came from Indigenous knowledge whatsoever,” says Eduardo Schenberg, a Brazilian neuroscientist and founder of Instituto Phaneros. “People don’t really know the story. They just see, ‘Oh, there’s this molecule.’ Pharma companies who are developing it are not unethical people. They’re just ignorant of part of the thing,” he adds.

Schenberg shares, “When I asked Brazilian Indigenous folks, ‘What do they see that they’re gaining or benefiting from the expansion of ayahuasca worldwide?’ Well, when it relates to culture, and even getting some funds, resources, and income, they think it’s good for that. But when we go into science, they say, ‘We don’t gain anything from this research.’”

Some scientists assume that working on synthetic molecules is different from having anything to do with the extraction of the plant, and so Indigenous knowledge could be overlooked in the process. “I disagree with that,” Schenberg says. “People started this science because of what they learned with Indigenous people. Companies wouldn’t be claiming inventions and discoveries in this whole field if it wasn’t for Indigenous knowledge in the first place,” Schenberg tells Truffle Report.

Describing the dismissive attitude of the West as ‘epistemic injustices’ — a concept from Miranda Friker (2007) – in psychedelic research, Schenberg says, it’s “a specific kind of injustice, where someone is wronged in their capacity to be a giver of knowledge or information. This is very much connected with races: They are considered to not even know how to know, because they’re dumb, because they’re black, or Indigenous, because they’re primitive, because they’re savages, or because of their religion.”

In his accepted manuscript for the journal Transcultural Psychiatry, Schenberg writes about how epistemic injustices are harming Indigenous communities, their culture, and depriving communities of their resources and right to traditional knowledge.

Initially, scientists looked at ayahuasca and DMT to try and understand their impact on a human body when consumed, keeping the mystical aspect and Indigenous guidance out of their research. Eventually, Schenberg writes, those researchers came full circle to acknowledge the therapeutic benefits of the substance.

“Thus biomedicine is revealing its own original prejudice: if it ultimately comes to recognize some therapeutic potential of ayahuasca, which is something that has been known and claimed by Indigenous cultures for a long time, how is it possible to justify the appropriation of the therapeutic use of ayahuasca to the detriment of Indigenous cultures?” he writes in the paper with Brazilian lawyer Konstantin Gerber.

Suggesting a collaborative bottom-up approach and protocols that are inclusive of Indigenous knowledge, Schenberg says would help “biomedicine researchers in not losing important information.”

“There is a continuity between traditional ceremonial use of sacred plants, the underground use of plant medicines, and the above-ground psychedelic-assisted therapies,” Labate emphasizes.

“It’s time to stop dissociating our practices from the people and the lands from where they originate. The psychedelic movement has extracted Indigenous knowledge since its very beginning, and needs to give back to grassroots groups who continue marginalized. The wealth and benefits that originate from Indigenous knowledge must be shared with them!” she adds.

“In the large scheme of things, what I see here is a big opportunity for psychedelic medicine. A new industrial sector is being born now to realize the importance that’s beyond individual mental health, treat the collective and guard the environment,” Schenberg says. “And to achieve these, reciprocity and respect for the Indigenous rights is the key to connect everything together,” he emphasizes.

Consent and respecting laws protecting Indigenous communities become a major part of reciprocity. This means taking  ‘no’ for an answer from the communities, something which drug developers and big businesses have historically had trouble with.

“One of the big challenges is that companies tend to approach consent as though it’s about negotiating a percentage and writing a check for a certain amount of money. They have a hard time dealing with it when a community gives a flat “No,” and too often the company goes ahead with what they want to do anyway, without permission,” says Jocelyn Bosse, Lecturer in Intellectual Property Law at the Law School at King College London tells Truffle Report.

“It becomes extremely hard for them [big companies] and almost impossible for them to even fathom, when it comes to communities, being able to say, ‘No’, just a flat ‘No’,” she adds.

Schenberg emphasizes that Western researchers will have to respect that boundary, and offering huge amounts of money is far from a solution, while on the other hand, simple donations after extractive practices would be similar to greenwashing in environmental projects.

“We also must recognize that just sending in money is not enough and breeds risks. Because many of these communities are not used to handling money,” he says. It becomes a more complex issue “leading communities into cultural changes affecting everything, it has to be thought through carefully,” Schenberg says.

He suggests a “Special International Council, where there are leaders with various qualifications, alongside Indigenous leaders, and many kinds of people, men, women, black white, regionals together, thinking about how we can do this for the common collective good.”

Reciprocity, in many forms, is absent when it comes to the relationship that the Global South is developing with Global North. Chacruna Institute recently launched an initiative to encourage reciprocity for knowledge and experiences to start a conversation.

The Indigenous Reciprocity Initiative is a project comprising at least 20 organizations from South, Central, and North America to a single platform, helping them with direct donations for their most impactful work at a grassroots level.

“The underlying principles of IRI is the idea of acknowledging our place in a world of interrelationships, and how to honour those relationships — between the Global North and the Global South, between businesses and the source of their profits, between Indigenous communities and the psychedelic space, the history and origin of the modern psychedelic movement and the emergent ‘psychedelic industry’,” Labate says. “A proper understanding of the historical currents that led us to this moment, of our cultural conditioning and the limits of our perspective is needed to create a healthier relationship between all of us,” she adds.