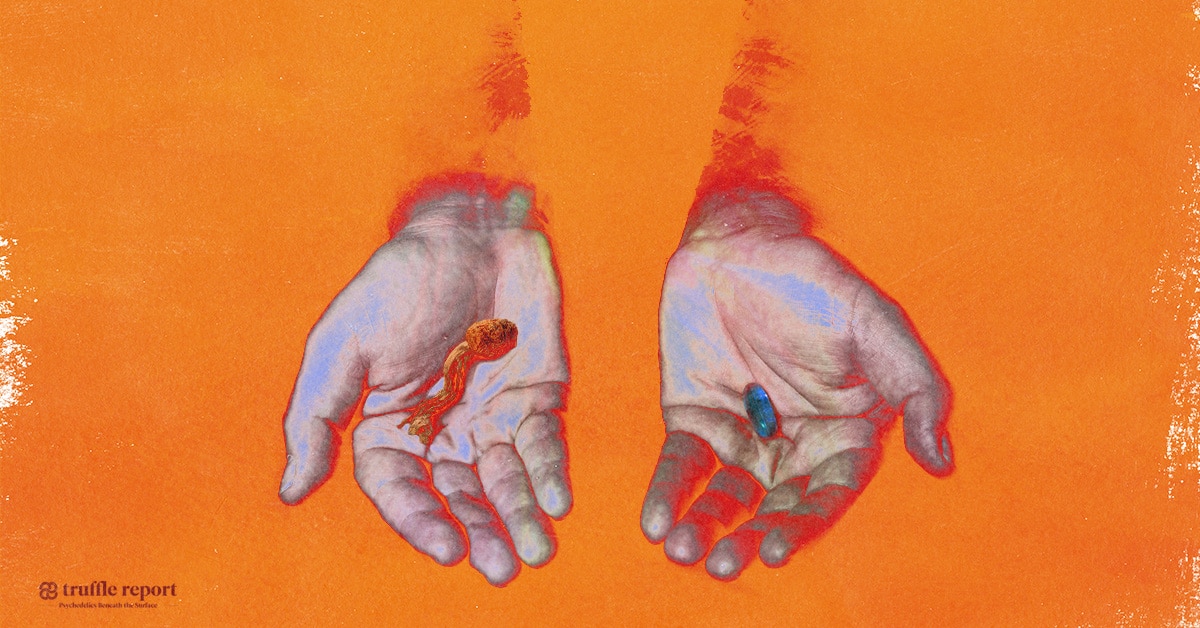 It turns out psychedelic patent squabbles are not as new a phenomenon as some might think. Jocelyn Bosse, a lecturer in Intellectual Property at King’s Law School UK, recently tweeted a thread discussing the ‘infamous plant patent’ for ayahuasca — a South American entheogen used as a spiritual medicine — granted in the 1980s in the United States.

In 1986, Loren Miller, director of California-based International Plant Medicine Corporation, acquired a patent on Da Vine (ayahuasca) with the U.S. Patent and Trademark Office (USPTO), allowing exclusive rights to trade and breed the sacred indigenous plant. It has been claimed that Miller acquired a sample of the plant from an indigenous tribal leader in Ecuador a decade before filing the patent application.

The news of the ayahuasca patent soon reached the indigenous tribe in question, and the Coordinating Body of Indigenous Organizations of the Amazon River Basin (COICA) — an umbrella organization of over 400 indigenous groups in the region. The Amazon coalition filed a petition in 1999 arguing the existing prior art — or evidence that the substance is already known — for ayahuasca that Miller claimed to be novel as Da Vine.

The patent was rejected in 1999 and the USPTO agreed it ‘should never have been issued.’ The verdict was considered a historic victory for the rights of indigenous peoples. However, it didn’t last long. The U.S. federal agency later reversed its decision and restored the patent on Da Vine in 2001. The patent expired two years later.

So why are we talking about this case now?

Psychedelics have come a long way in both scientific research and cultural movements around the world. In the last two years, grassroots initiatives to decriminalize psychedelics in particular throughout North America have expanded rapidly alongside studies that have, time and again, proven the benefits of psychedelic substances in addressing mental health issues, including PTSD, addiction, and severe depression.

With this momentum, the private sector is hoping to capitalize on the ongoing medicalization of psychedelics through manufacturing, drug development, and clinical administration of these substances and their proprietary, patentable derivatives. It isn’t news that there are certain for-profit companies that have been openly challenged on their questionable practices in this process of monetization.

The most recent instance goes back only a few months when multiple news organizations and advocacy groups condemned COMPASS Pathways — one of the largest psychedelic mental health care companies — for its controversial international patent applications that sought broad claims encompassing basic psilocybin therapy practices. There are concerns over ethics and equity, which would eventually trickle down to complex issues such as the affordability and accessibility of the treatment, specifically among marginalized communities.

With the psychedelic drugs industry now projected by some to be worth $10.75 billion by 2027, advocates have expressed concern over the possibility of psychedelic companies tracing the path of existing pharmaceutical practices, which has often priced poorer communities, including ethnic minorities, out of basic healthcare services, and further inflated the prices of medicines by engaging in manipulative practices such as ‘evergreening’ or ‘thicketing’ in patenting.

When examined closely, considering its associated history and interaction with indigenous communities, U.S. patent laws highlight a grave issue of ‘structural exclusion’ that may have contributed to the ongoing disparity. Why we’re talking about this today is the fact that most of the patents filed for psilocybin are by companies led by white individuals, with the two exceptions we could find being Better Life Pharma and Orthogonal Thinker. What’s more interesting is how the position of director in the U.S. Patent and Trademark Office has also always been led by a white individual, with the singular exception of Michelle Lee, appointed by the Obama administration.

In a New York Times opinion piece, Priti Krishtel, founder of the non-profit organization Initiative for Medicines, Access & Knowledge, writes that although “the connection is less obvious than for agencies that deal with civil rights, poverty, health care or housing, there is a direct line between what the agency [USPTO] does and the systemic disenfranchisement of Black people.”

“Whether that’s due to structural issues in the Patent and Trademark Office or to systemic barriers Black people face that make them less likely to apply for patents is unclear; the agency’s colorblind approach means it doesn’t collect demographic data about applicants,” she further writes, suggesting that the agency should consider keeping demographic records to address the issue.

In the psychedelic space, on the other hand, the issue may not just be limited to the Black community, but is likely to be a concern for a wider swathe of BIPOC communities of the Americas that have benefited from entheogenic plants for centuries prior to their adoption by mainstream Western medical practices.

While the kind of biopiracy seen in the instance of the aforementioned ayahuasca patent in the 80s hasn’t been a widespread practice in the psychedelic industry, the potential is there for issues of structural exclusion to take hold. The psychedelic industry has already started to adopt practices of the mainstream pharma companies, whether effective or not. Advocates and activists, in the meantime, are trying to redefine those fine lines between ethical and unethical practices, and stop these problems from becoming a part of the booming industry through public health research and related discussions.

The issue of structural exclusion and racial equity becomes a question depending on “how you define those inventions in the first place [to acquire a patent],” says Anjali Vats, Associate Professor of Law at the University of Pittsburgh School of Law and the author of The Color of Creatorship.

In her book, Vats carefully analyses the U.S. intellectual property system and highlights how ethnic minorities, especially Black individuals, have fallen victim to systemic exclusion, and how this could be “particularly pernicious because it is cloaked in technical legal language and in seemingly objective categories such as invention, novelty and infringement. So it goes unchallenged, and shapes our understanding of who can participate in science, technology and markets — and how.”

It’s important to understand how and why patents are granted to better understand the concept of structural exclusion.

As a general rule, the invention should be novel, non-obvious, and useful in order to secure a patent, or temporary monopoly. Once granted, the inventor has an exclusive right over the manufacture, use or sale of that commodity or invention for a certain period of time, which can then be utilized or licensed at their discretion.

“The intent of the patent is meant to incentivize in the activity that underlies an invention,”  Graham Pechenik, a patent and intellectual property (IP) lawyer with Calyx Law says. “It’s basically to encourage the inventors to undertake the risk of coming up with the new invention and rewarding it by granting a temporary monopoly,” he added during a webinar hosted by Chacruna earlier in September.

Vats explains that while incentivization is at the center of patent applications, power dynamics, extraction issues, and racialized capitalism cause the exclusion of ethnic minorities.

“Who is researching psychedelics?” Vats asks. “Chances are it is people who already have a lot of money and privilege…” “Especially in the Global South, the West comes in to extract knowledge and treat it like they were the first ones to discover it,” she tells Truffle Report.

There are some renowned non-psychedelic patent cases including basmati rice, or neem, for instance, that have highlighted the issues of extraction and racial capitalism while overlooking the existence of cultural or traditional knowledge. In 1995, the USPTO had awarded a patent on turmeric — an east Indian herb widely used as a household ingredient in the South Asian culture — to the University of Mississippi medical center for its wound healing property.

The Indian Council for Scientific and Industrial Research followed up with the U.S. patent office and proved the prior art of the substance. The U.S. federal agency later revoked the patent.

“I think a lot of the scientists are acting in good faith; they’re not necessarily looking to negate the existence of that knowledge amongst indigenous peoples, but trying to create value for the substances that they’re producing in a way that is harmful,” Vats says.

Whether intentional or not, the existing issue of structural exclusion in the patent system when tied into the expanding process of psychedelic capitalism not only leads to concerns over accessibility, affordability and equity in the healthcare system, but also deprives indigenous peoples of their rights and control over the traditional knowledge of their communities’ plant medicines.

Can Indigenous Knowledge and Rights be Protected in the Race to Capitalize on Psychedelics?

The ethical question of ‘what can be patented and what can’t’ doesn’t begin and end around systemic inequality, but also raises concerns about whether the growing psychedelic industry is reciprocating to indigenous communities from whom the knowledge and substances have been borrowed.

Vats pointed in our initial conversation that whenever there is a Western intervention with substances, for instance, cannabis, or ayahuasca, “prices soar.” She also flagged in one of our emails that while Michael Pollan’s book How to Change Your Mind played an integral role in bringing psychedelics back into the mainstream, there has been an ayahuasca business boom “and is creating a serious shortage” within indigenous communities since its publication.

“The patent law is designed to protect the form of innovation that exists in Western medicines, Western pharmaceuticals, and Western health and scientific endeavours. It is not designed to protect indigenous knowledge, and it doesn’t protect indigenous knowledge,” says Murphy Halliburton, professor of anthropology at Queens College and the Graduate Centre, CUNY, and the author of India and the Patent War.

He said, while sharing the platform with Pechenik during a Chacruna webinar, that cultural knowledge cannot be patented but can be used in showing its existence to fight against patents in the West.

On the other hand, he points out that fighting for claims over traditional knowledge is expensive. “Defeating these patents requires money. It comes down to who can pay for legal labour to defend their cultural knowledge in patent offices,” Halliburton added.

Multiple stakeholders including the Usona Institute, the University of Wisconsin-Madison School of Pharmacy, and the American Institute of the History of Pharmacy (AIHP) are building an online community Psychedelic Prior Art Library ‘Porta Sophia’, to centralize a database of all the different psychedelic research and patents from different countries, and safeguard the existing knowledge from biopiracy.

This is a good first step, but is a long way from ensuring reciprocity with indigenous communities.

Chacruna Institute recently launched an initiative to bring together corporate firms and indigenous communities. In the second part of this series, we will be discussing the relationship of the Global North with the Global South in patenting practices, how the extraction of knowledge and resources can be reciprocated with indigenous communities, and how this can inform the ethical mainstreaming of psychedelics.