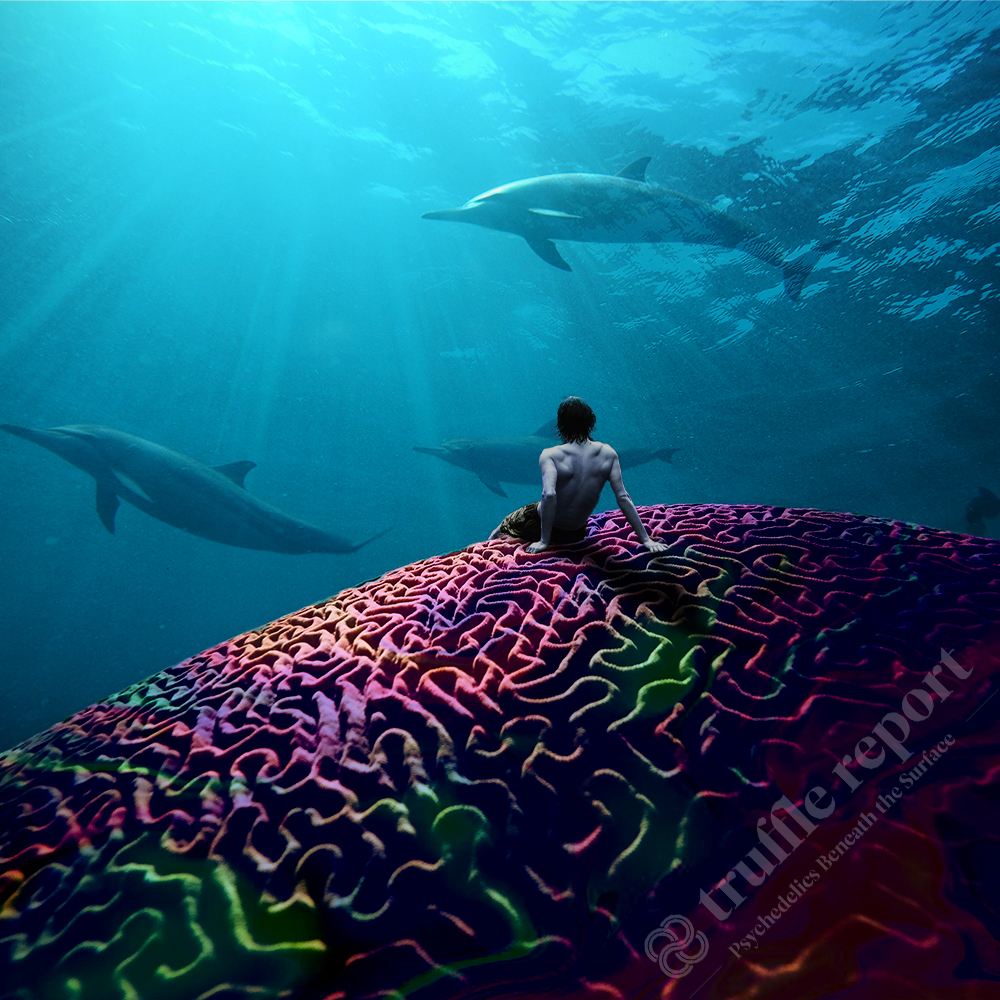 The historical development of psychedelics contains a colourful rogues gallery of influential figures. Truffle Report has already discussed Alfred Hubbard — the inventor, bootlegger, and spy who came to be known as the “Johnny Appleseed of LSD” — and Alexander Shulgin, who created and synthesized hundreds of psychoactive compounds. The story of researcher John C. Lilly is also a complicated one. His early work in neuroscience during the cold war era would become a bizarre mirror reflection of his later work in psychedelic consciousness exploration, with a brief detour into marine biology taking place between them. His life would inspire a number of science fiction works, like the 1973 film, Day of the Dolphin, and 1980’s Altered States. The lore of Ecco the Dolphin, a Sega Genesis game, was likely inspired by Lilly’s work as well.

While his later work would be an ongoing exploration into human consciousness, his early work was in the mapping of the physical workings of the brain. This would turn out to be a timely interest, as the U.S. military was beginning to look into mind control and its applications after reports of American POWs being indoctrinated by their Chinese captors in the Korean War.

One of Lilly’s early contributions to neuroscience was figuring out a safe way to insert electrodes into the brains of monkeys and cats —a technique he would use to monitor brain activity and discover the pleasure, pain, and reward centres of the brain. This had applications in the area of altering human behaviour via electrical stimulus. Upon visiting McGill University — also notoriously affiliated with project MKULTRA —he was introduced to Donald Hebb and the idea of using isolation to make people more suggestible.

Lilly’s attitudes toward and precise level of involvement in the U.S. government’s efforts to master brainwashing techniques is not entirely known. A report was uncovered that detailed his suggestions for applying mind control techniques to human subjects — via isolation, electrical stimulus and the direct insertion of data into the brain. Publicly, Lilly claimed that his involvement with the military was for the purpose of achieving greater freedom with his research. In 1956, the potential brainwashing applications of isolation tanks were revealed to the public, to the embarrassment of both Lilly and Hebb. His research into isolation tanks continued, but took a bit of a swerve.

Lilly, now familiar with the electrical workings of the mammalian brain, was inspired by a chance encounter with a beached pilot whale near his home in Massachusetts. Impressed by the size of the whale’s brain, he continued to look into aquatic mammals and became fascinated by the playful and intelligent behaviour of dolphins. Alongside his ongoing work with isolation tanks, and eventually psychedelics like LSD, Lilly felt that establishing communication between humans and dolphins could become an important step for the development of mankind. NASA, feeling that this could set a precedent for establishing communication between human beings and extraterrestrial species, offered funding for this research.

His dolphin research culminated in a particularly famous experiment of his that took place in the Virgin Islands from June 1965 to August 1965. Margaret Howe, an assistant of his, would cohabit with a dolphin named Peter for several months in an effort to teach him to speak English. This experiment gained public notoriety when it was reported by Hustler (with much exaggeration) that Margaret had sexually relieved Peter in order to maintain his focus on their language lessons.

Not helping matters was that John Lilly had started fixating on LSD in his research. Frustrated by the lack of visible impact it had on the minds of dolphins, those who worked with him noted that he was becoming increasingly reckless as he administered doses to them. Eventually, his funding was pulled. The tragic end to this tale was the death of a depressed Peter after being separated from Margaret —since dolphins are capable of consciously choosing not to breathe.

John Lilly in the New Age Era: Psychedelics and Isolation

Lilly’s later work deeply contrasted his early research. His investigations into the physical elements of the human brain, as well as how to control it, morphed into studies into the elements of the human consciousness —and how the individual can gain more control over their own lives. He briefly worked with psychiatrist Jay Shurley to examine the potential psychotherapeutic benefits of isolation tanks. Early versions of these tanks saw the subject floating upright in 160 gallons of water and a mask for blocking out external input. Lilly later added epsom salts in order to help the subject float. His therapeutic process emphasized that the subject could control the length of time they spent in the tank, a stark contrast to brainwashing techniques in which the subject had no control.

Lilly’s introduction to LSD and ketamine influenced his research with isolation tanks, and he began to take them before submerging. Ketamine proved particularly effective for augmenting the effects of sensory deprivation because of its dissociative effects. Lilly felt that these could be used to explore one’s own consciousness and potentially undo the social programming inflicted on people during early life — a process he dubbed “metaprogramming”. Through metaprogramming, Lilly argued, one could gain deeper control of their personality and sense of self. While the scientific community did not receive these theories well, the new age psychedelic movement accepted them readily.

Unfortunately, Lilly’s persistent use of ketamine and his sense of paranoia surrounding mind control from the cold war era eventually caught up with him. He came to believe that an extraterrestrial organization known as the Earth Coincidence Control Office (E.C.C.O — get it?) was controlling the minutia in his life. He believed that another extraterrestrial force, the Solid State Intelligence, was a sentient technology expanding throughout the universe to supersede organic life. His mistrust of the psychiatric community grew — he rejected classic Jungian psychoanalysis in favour of his own cybernetic framework for human consciousness.

In spite of this, Lilly remains an important figure in psychedelic, sensory deprivation, and marine biology circles, depending on who you ask. He passed away in 2001, at the age of 86.