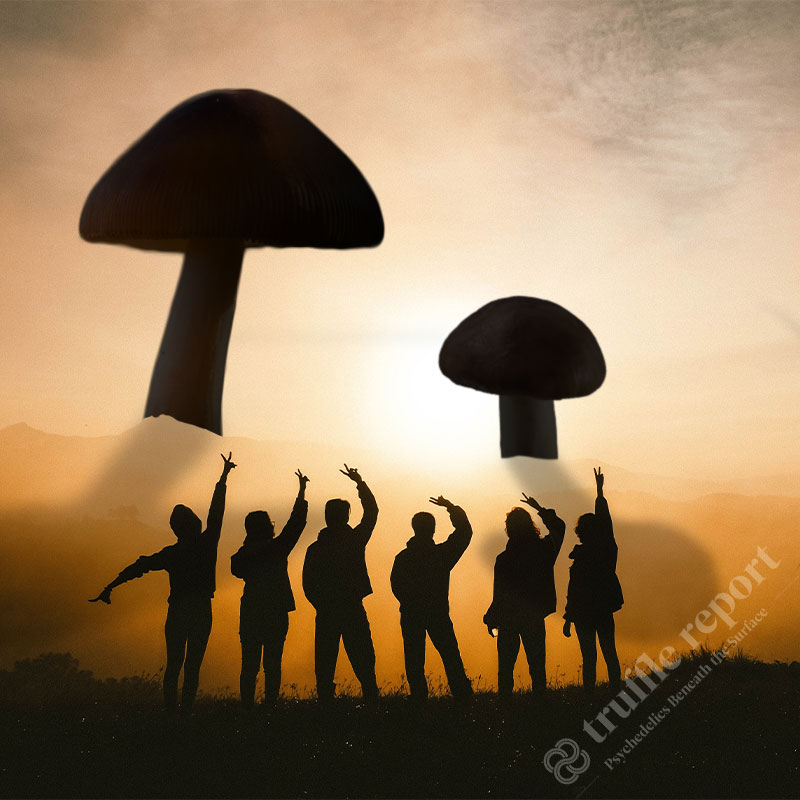 Contemporary research with psychedelic drugs mostly focuses on individual psychotherapy. There aren’t a lot of reviews, for example, that have attempted to systematically identify and compile experimental studies of psychedelic-assisted group therapy. However, group therapy has shown to be incredibly effective when treating certain conditions that benefit from human interaction and feelings of connectedness which many psychedelic substances are known to enhance. What are the potential benefits of psychedelic-assisted therapy in group settings?

What is Psychedelic Group Therapy?

If we think about it, psychedelic therapy has traditionally taken place in group settings. These may not have occured in clinical contexts, but plant-based psychedelics like psilocybin, ayahuasca, and peyote have been used for many years in group settings by various indigenous groups for healing and religious purposes.

The group setting was replicated in psychedelics’ early clinical studies in the mid 20th century, when researchers found promising results in experimental treatments for alcohol use disorder and neurosis, mostly with LSD. Unfortunately, as we already know, psychedelic research was abruptly interrupted by stigma and prohibition. These past studies, while presenting an intriguing foundation on which we can build, are now slightly outdated and not up to present-day clinical trial standards, which limits what conclusions can be drawn from them concerning the safety and efficacy of psychedelic group therapy.

In an open-label trial of psilocybin-assisted psychotherapy for treatment-resistant depression, social connectedness was found to be a possible underlying mechanism of therapeutic change. Also, many contemporary trial participants have requested meetings with other trial subjects, confirming the importance of connecting with those who have undergone similar profound psychedelic experiences. These facts, added to the evidence gathered in the past, and traditional indigenous rituals, may suggest that psychedelic group therapy could improve therapeutic outcomes and participant satisfaction.

Through the 1960s, many psychedelic-assisted group therapy trials for alcoholism were conducted with positive results. Most of the results showed that the administration of the substance itself was what eventually led the participants to remain sober for long periods of time, or to improve their cravings. With or without psychedelics, group therapy was found to be beneficial for this particular demographic.

In an LSD study featuring 168 participants diagnosed with different conditions conducted in 1961, researchers concluded that group therapy helped subjects gauge and strengthen their ability to connect interpersonally, which was ultimately as beneficial as the LSD itself.

A systematic review study published by the Journal of Psychoactive Drugs reports that in most of the studies conducted in the 1960s regarding psychedelic-assisted group therapy for “neurotics”, the group setting was a crucial part of the effectiveness of the treatments. This is because most of these conditions greatly benefited from human interaction and were characterized by having poor interpersonal skills which seemed to improve by combining group therapy with the psychoactive substance. It is important to note that the research is outdated not just because of its age, but because and includes homosexuality and hysteria — which have since been removed from the DSM — as diagnosed conditions.

A pilot study on the safety and feasibility of psilocybin-assisted group psychotherapy for demoralized older AIDS was conducted by the University of California San Francisco from July 2017 to January 2019. The 18 participants were long-term HIV/AIDS male survivors between the ages of 50 and 66 who identified as gay and were struggling with moderate to severe demoralization, which is a psychological reaction to stressors. Unlike depression, it presents with sadness associated with a specific event or circumstance.

In the trial, which was open-label, the participants were split into three groups of six, meeting for group therapy on four occasions before receiving a single dose of 0.30 to 0.36 milligrams of psilocybin per kilogram of the patient’s body weight. They also received 4-6 more group psychotherapy sessions after being given the initial psilocybin dose and were monitored for around three months following the experience.

The group therapy sessions occurred twice per week and lasted ninety-minutes each. The treatment regimen was modeled on Supportive Expressive Group Therapy (SEGT), which is a palliative care-focused existential psychotherapy method that prioritizes the present moment, processing, mutual support, and emotional expression with the aim of reducing fear of death. While the study used the SEGT model as a foundation for the group therapy, substantial modifications were made to accommodate the psilocybin administration session.

The study’s results showed a significant decrease in demoralization among the participants. This means that the primary clinical outcome showed a significant reduction in self-reported demoralization by the end of the treatment and at the three month follow up. The researchers also found that psilocybin paired with group therapy produced long-lasting improvements in mood and existential distress.

A recent study conducted by Imperial College London has shown that consuming psychedelics in group settings like ceremonies or retreats could have positive effects. In this observational, web-based study, the 886 participants were asked to complete a series of online surveys: one two weeks before their psychedelic experience, another one a few hours beforehand, a third one on the day after their sessions, a fourth one on the next day, and a fifth one four weeks later.

The results showed that the group setting was significantly correlated with increases in psychological wellbeing, social connectedness and other notable mental health outcomes. The path analyses also revealed that this experience of community during the psychedelic sessions was a significant predictor improvements in wellbeing and mental health in the long term. This points towards a therapeutic potential use that is unique to group settings in psychedelic-assisted therapy.

Psychedelic-assisted group therapy is beneficial for the same reasons as its more conventional counterpart. It allows users or patients to feel less isolated as vulnerability becomes a shared experience. Group therapy is especially effective for some conditions like anxiety, depression, bipolar disorder and substance abuse. On a practical level, it can also be very cost- and time-effective.