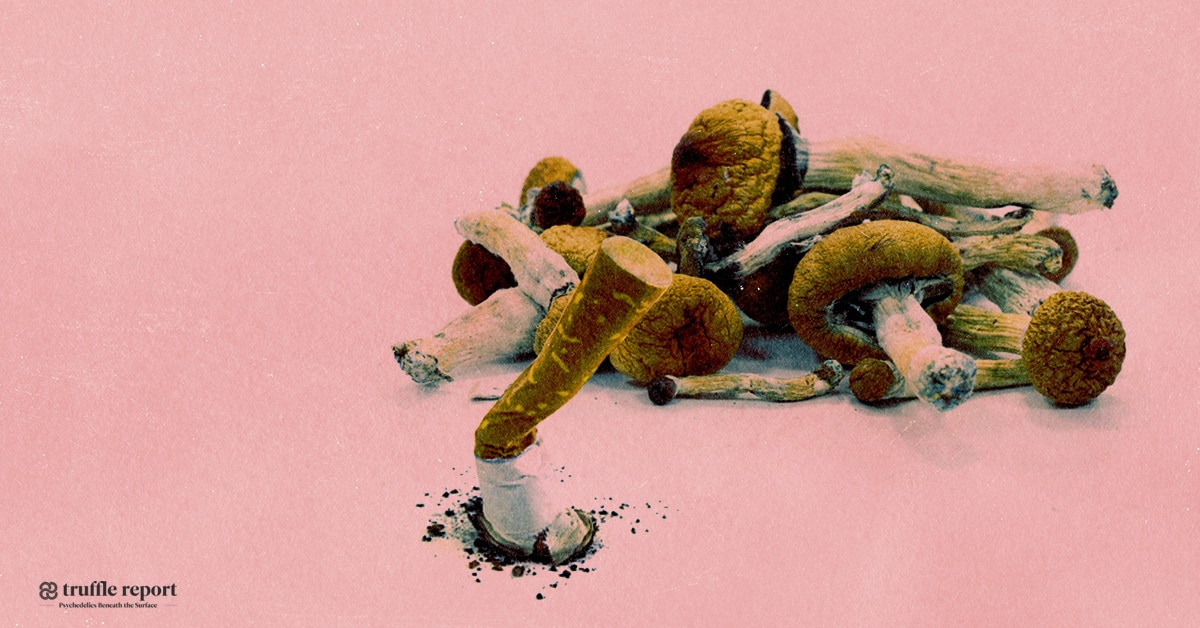 A psilocybin study to treat tobacco addiction is being funded by a U.S. federal drug research agency as a ‘high-risk clinical study’, the first time a complete investigation into the possible therapeutic benefits of a classical psychedelic has received federal funds since the War on Drugs was declared in the 1970s.

Dr. Matthew W. Johnson — professor at Johns Hopkins and principal investigator in the psilocybin-facilitated smoking cessation study — made the announcement on social media Monday, confirming the news of the multi-site clinical trial for tobacco addiction funded by the National Institute on Drug Abuse (NIDA).

“I’m extremely excited about it. The government funding for a therapeutic trial of psychedelics is something the field has been waiting on for 20 years now in the modern renaissance of psychedelic research,” Dr. Johnson tells Truffle Report.

The federal drug agency’s U01 grant — the designation for a Research Project Cooperative Agreement — is an investigator-initiated, ‘multi-center high-risk clinical study’ that would allow the three sites, namely, John Hopkins, New York University, and the University of Alabama at Birmingham, to study a psychedelic substance for tobacco addiction. Johns Hopkins will be the lead site under the leadership of Dr. Johnson. The other two sites will be led by Dr. Michael Bogenschutz and Dr. Peter Hendricks respectively.

“This is extremely encouraging. Public funding for psychedelic science is critical,” says Dr. Hendricks, professor at the Department of Health Behavior of the University of Alabama at Birmingham. “My hope is that this opens the door to further scientific inquiry, and ultimately, the advancement of a treatment paradigm that has the potential to alleviate suffering across the globe,” he writes to Truffle Report in an email response.

A fully-funded grant, the NIDA has allotted $4 million for the three-year project, 5-HT2A Agonist Psilocybin in the Treatment of Tobacco Use Disorder, which is expected to be completed by September 2024.

“It’s going to be the first blinded research with psilocybin for smoking cessation. So it’s a rigorous advance on a couple of previous studies that have been very promising so far,” Dr. Johnson says.

The study is expected to begin in six months, after clearing a number of regulatory hurdles, “which are quite extensive with the Schedule I drug,” Dr. Johnson shared.

Johns Hopkins University School of Medicine has been studying the potential of psilocybin for treating nicotine addiction since 2008. In their pilot study for 5-HT2A Agonist Psilocybin in the Treatment of Tobacco Use Disorder — published in 2014 — the investigators determined that psilocybin “may be a potentially efficacious adjunct to current smoking cessation treatment models.” The research concluded by suggesting that it could point scientists in a direction for future works that may include a “qualitative study of participants’ accounts regarding potential psychological mechanisms, and neuroimaging studies to inform biological mechanisms.”

The pilot study was also partly funded by NIDA under the NIH Research Project Grant Program (R01), one of the most commonly used grant programs.

Besides this, Johns Hopkins researchers, including Dr. Johnson and Dr. Roland Griffiths, have in recent years looked into pilot and long-term implications of psilocybin-assisted smoking cessation. An ongoing study, expected to conclude in December 2022, will be enrolling about 95 participants suffering from nicotine dependence for a randomized psilocybin-facilitated smoking cessation treatment.

Tobacco is one of the leading causes of death in the world, killing over 8 million people each year, according to a 2021 report by the World Health Organization. In the U.S., the economic cost of smoking tobacco accounts for over $300 billion a year— $225 billion in direct medical care and $156 billion in lost productivity, the U.S. Centers for Disease Control and Prevention (CDC) says.

Recently, drug policy advocacy groups have been pushing for federal grants to support psychedelic sciences. Meanwhile, various representatives from federal agencies have been acknowledging the data from studies into the therapeutic efficacy of psychedelics. In May, Nora D. Volkow, the director of NIDA penned an op-ed criticizing the disproportionate effects of the War on Drugs.