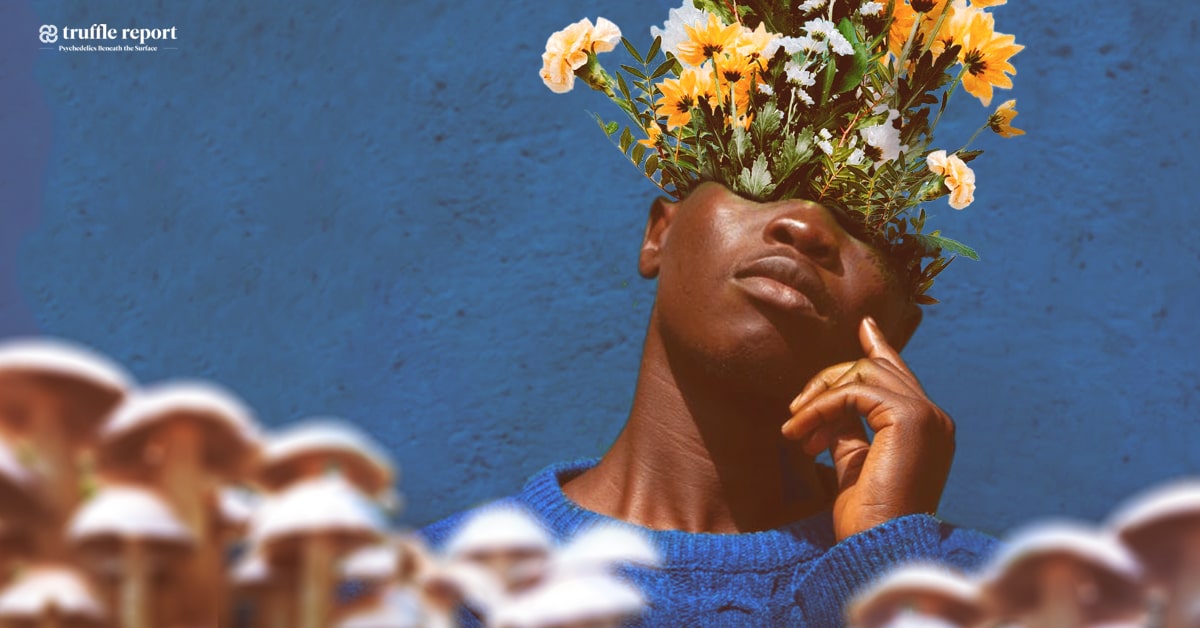 The modern-age psychedelic renaissance is centred around finding solutions to the prevailing mental health conditions of our time, mainly post-traumatic stress disorder (PTSD), severe depression, and anxiety through the therapeutic use of substances like psilocybin, MDMA, LSD, or mescaline. While this process has been generally laid out in three steps — counselling sessions to determine ‘set and setting’, administration of the psychedelic substance, and integration — the treatment doesn’t really end there.

Questions remain. What happens to patients after their trial and therapy? Or, equally possible, after their use of substances in a less formal setting? How do they integrate their experiences over the years? What changes for them?

Post-therapy, there’s a new discussion growing from the ongoing success of the treatment model, and some intriguing trains of thought into how we define our own personal development in the area of post-traumatic growth.

Post-traumatic growth (PTG) is a “positive psychological change experienced as a result of the struggle with highly challenging life circumstances,” as defined for the first time in 1996 by psychologists Richard Tedeschi, PhD, and Lawrence Calhoun, Ph. The two categorized the impacts of PTG into three main classifications — changes in self-perception, changes in interpersonal relationships, and changes in philosophy of life.

Now, the concept of PTG is being tied into psychedelic-assisted therapy and to understand how exactly an individual evolves post-therapy.

“Post-traumatic growth is the idea that when people are faced with a difficult situation they may find it difficult to cope, but that doesn’t mean that it’s not a circumstance that some type of positive outcome isn’t possible,” says Dr. Hayden Rubensohn, who has worked as a research therapist with the Multidisciplinary Association for Psychedelic Studies (MAPS), contributing to Phase 2 and 3 clinical trials using MDMA-assisted psychotherapy for PTSD.

He continues, “There’s a field of psychology called positive psychology, which looks at positive changes that people have when they’re faced with adversity. I think that if we just take the idea that post-traumatic growth requires the creation of a narrative and psychedelics deepen somebody’s connection with themselves and allow the formation of a new narrative, it would stand to reason that psychedelics would facilitate post-traumatic growth.”

‘Could MDMA-assisted psychotherapy improve participants’ lives in other ways? Do participants report having better relationships, increased appreciation for life, or an enhanced sense of personal efﬁcacy after engaging with their trauma in therapy?’ the authors write in the paper published in February 2020.

Psychologists say that depending on the trauma and age of an individual, psychotherapy may play a role in facilitating PTG, which further progresses into a reduction of symptoms. Over the years, about 42 studies on PTSD and PTG have concluded that “both positive and negative post-trauma outcomes can co-occur.”

In their paper published in 1996, Tedeschi and Calhoun described a ‘21-item scale’ of parameters such as the ability to perceive new possibilities, relating to others, personal strength, spiritual change, and the appreciation of life. While studying PTG, this research didn’t involve psychedelic-assisted therapy.

‘The PTGI appears to measure a general tendency to experience difficult events in a way that produces perceptions of benefits, but its focus is on the variety of possible benefits that may be discovered or construed, given that people may find some benefits and not others,’ the authors wrote in their paper on Post-traumatic Growth Inventory.

“Somebody does not have to have PTSD in order to experience post-traumatic growth,” explains Dr. Rubensohn. “PTSD is defined by the DSM as people who need to have a certain number of symptoms that are a certain type. And if they have those symptoms, they get a label of PTSD.”

The Diagnostic and Statistical Manual of Mental Disorders (DSM-5) includes PTSD in a new category, Trauma and Stressor-Related Disorders, which require an individual to have witnessed some kind of stressor involving intrusion symptoms like flashbacks; avoidance; mood swings or negative alterations in cognitions; functional significance and so on.

The MAPS-supported paper acknowledges that PTG can “serve as an independent psychological mechanism of action in PTSD remission.”

However, when mixed with psychedelic-assisted therapy, evidence of PTG can emerge in individuals more rapidly. “The drug is associated with complex pharmacodynamics and pharmacokinetics and with beneﬁcial subjective effects, including improved self-reported well-being, enhanced interpersonal closeness, more empathy for self and others, reduced distress in response to social exclusion and prosociality enhanced introspection, and emotional openness,” the MAPS-supported research says.

Dr. Rubensohn says that PTG doesn’t always require clinical counselling, but can be experienced with a compassionate partner on your side. “One of the things that come up with post-traumatic growth is the idea of expert companions. What that means is that a lot of people, in order to have post-traumatic growth facilitated, don’t even necessarily need professionals.”

“A lot of people just need an expert companion. What’s an expert companion? It’s somebody who deliberately makes the choice to be a partner in that person’s life, to support them, to listen to them, to give them space, to not impose their own agenda on that person. So even outside of a specific modality of therapy, just supportive, caring people can make a big impact,” Dr. Rubensohn tells Truffle Report.