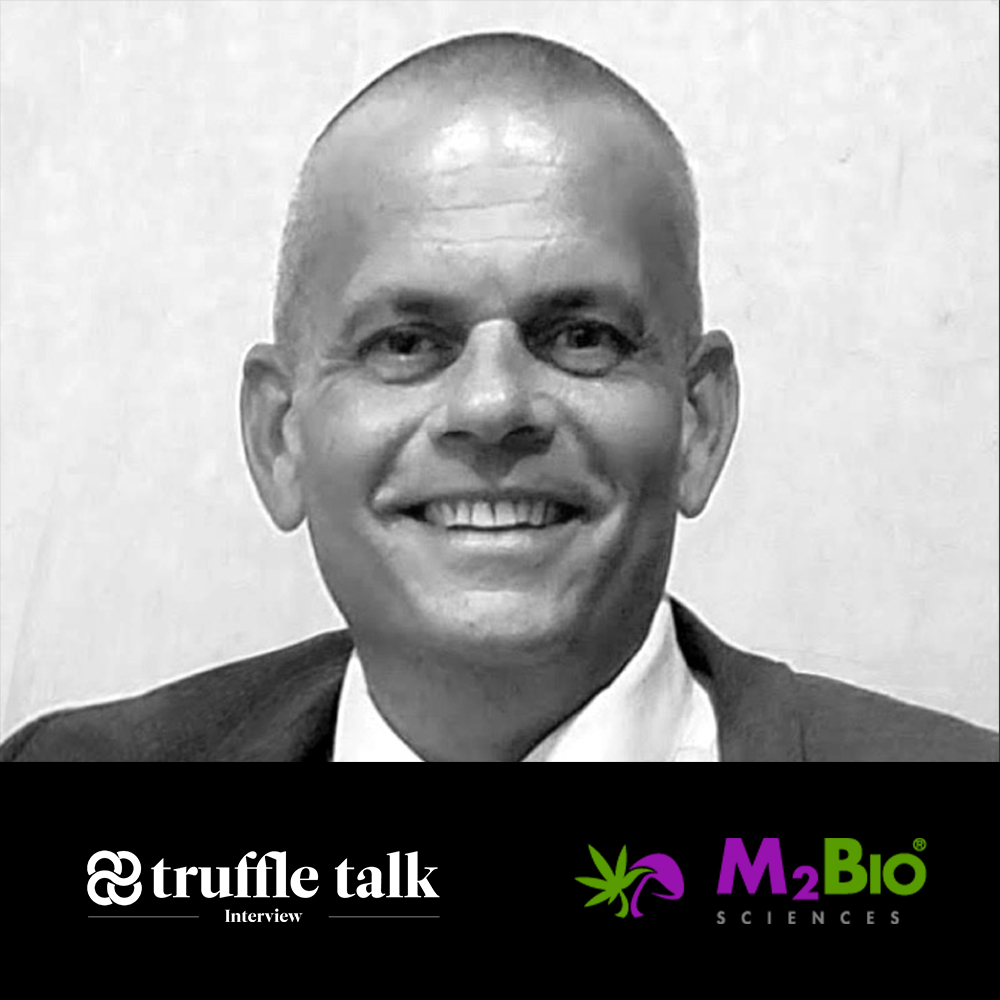 Truffle Report connected with Jeff Robinson, Founder and CEO of M2Bio Sciences, a bioceutical company focused on medical research, formulation and delivery systems involving cannabinoids and psilocybin. Robinson discussed  M2Bio’s areas of focus, his hopes for a better future for psychedelics, and the importance of “hardcore” science.

Jeff Robinson has been in the capital markets arena for years, and has witnessed the health and investment potential of the cannabinoid (CBD) and mushroom markets. He became an outside investor in multiple publicly traded cannabis companies and found that they were lacking in science and research. Robinson didn’t want to be “a part of a drinking your Kool-Aid team” and decided to make the changes he wanted to see within the cannabis industry by creating Wuhan General with his partner and CMO Dr. Anna Morera Leralta.

“I have a nickname in the business world, ‘Contrarian Mind’. I like to be different from the crowd and to approach things using critical thinking. I saw so many things that could be done better,” Robinson said. “I was always fascinated by how the brain works, and what always concerned me was this massive issue with depression and any issues related to psychiatric disorders, where the brain isn’t working the way it should be. What intrigued me in the psychedelic space was that we’re able to turn the brain on and off in certain receptors to do certain things. Why do people get addicted to alcohol? What receptor causes us to become addicted? How can we develop something to address that? The more we can dig into those particular areas and use things like psychedelics to trigger a response, the more we will be able to assist alcoholics for example. Imagine being able to use psychedelics to get out of that funk and to train your brain so that you can enjoy life without being drunk. It is one of the particular issues that we’re going after and hoping to solve.”

M2Bio Focus and Psychedelic Research as a “Marathon, not a Sprint”

“Our focus is really on the anti-inflammatory side, as inflammation is at the root of all diseases. We will continue to conduct our research, in 2021 we’re moving on to human trials and are very excited to be a part of this groundbreaking science.”

“We are looking at the whole brain, trying to figure out what areas we can truly help. Coming up first this year is our protocol for alcohol dependency. The second one will relate to inflammation, and the next level down relates to cardiology. We stumbled upon it by accident, which is one of the great things about science. We continued down that path, and we’ve had some incredible results as relates to cardiology in live animals. We hope to deal with certain diseases related to cardiology using psychedelics. That’s going to be another fascinating arena for us for this year,” he said.

“It’s all about drug research and drug discovery. Everything has to be highly accounted for, from the mice to the amount of natural or synthetic psilocybin we use. That takes years of great research. It doesn’t happen in two months. If your results at the end of the day are successful, then you’ll have a great successful company. This research is a marathon, not a sprint. Many companies think it’s a sprint. That’s why all of them are concerned about stock prices moving up or down. I don’t care about our stock price; I rarely even look at it. What I do know is that over time, with good hard work and great scientific research we will be successful. That’s all I’m concerned about delivering for the public and our shareholders. I’m not here to deliver a stock price based on heavily promoted and paid for articles or stories. That’s not who we are. As I get older, knowing what I know in the industry, I don’t want to see that stuff. I prefer to see hardcore science, critical thinking and doing great work to help everybody with the diseases that are out there, that are traumatizing families and people. I want to help those individuals,” he continued.

CBD, Psilocybin and a “Lack of Accreditation Towards Proper Standardization”

Having been in the cannabis market for so long, I asked Robinson for his thoughts about the changing psychedelics industry, and how it compares to CBD.

“The big problem in the industry is the lack of accreditation towards having proper standardization of what medicinal cannabis needs to be. There are so many different strains out there that we see a lot of gene pollution in the strains of cannabis. When you’re doing medicinal cannabis, and you’re making medicine, you need to make sure that it is always the same, that you’re delivering a consistent product to the marketplace. You can’t have different cannabis every time. To address that issue, we’re using tokenization and blockchain technology to manage everything from the seed to shelf of the cannabis industry. It is extremely important that we all know at the end of the day: Where is our product coming from? Where was it grown? Under what conditions? What type of soil was it grown in? We need regulation, and hopefully, we can be a world leader in bringing that type of regulation and technology into the industry,” Robinson explained.

“There are many of these kinds of so-called psychedelic leaders out there that tell people it’s okay to go out and have a cup of mushrooms on the weekend and have a great experience with your friend. I sit there, and I cringe when I see it. First of all, you don’t even know where your mushrooms are coming from. You don’t know what type of magic mushroom you’re ingesting, you don’t know what type of dosage sits in the mushrooms that you’re eating. It’s so dangerous to do this stuff, yet people think that it’s the cool thing to do microdoses, whatever. To me, it’s highly irresponsible. We will be using that same technology to bring standards into the industry that will help everyone in the end. It’s not about a short-term race to get your psilocybin-based product into the market because quite frankly there is no legal market for psilocybin at the moment,” he said.

“At the moment, because cannabis is a much more accepted and somewhat legal drug that’s now decriminalized in most states, it has the early leg up in the industry. Bringing those types of products to market is a lot easier, even though in certain states you still can’t do it. In the psychedelic space, any product that will be developed in the future will be drug-based and related to drug discovery. Drug discovery takes years, not hours. Everyone needs to be prepared for quite some time to pass to get the types of results that we can deliver to people. We need to be honest in terms of what will be the advocacy and the dosage for psilocybin. With any drug, dosing is of course the most important thing, knowing what it is that we need to deliver to the patient. There are so many people in the neural side that are brilliant scientists. They should and will have a voice in this industry soon enough. The voice should not be coming from the chef who’s making magic mushroom gazpacho soup on the weekend. It should be coming from doctors and scientists that do the science and will hopefully, down the road, administer the medicine to help people,” he concluded.