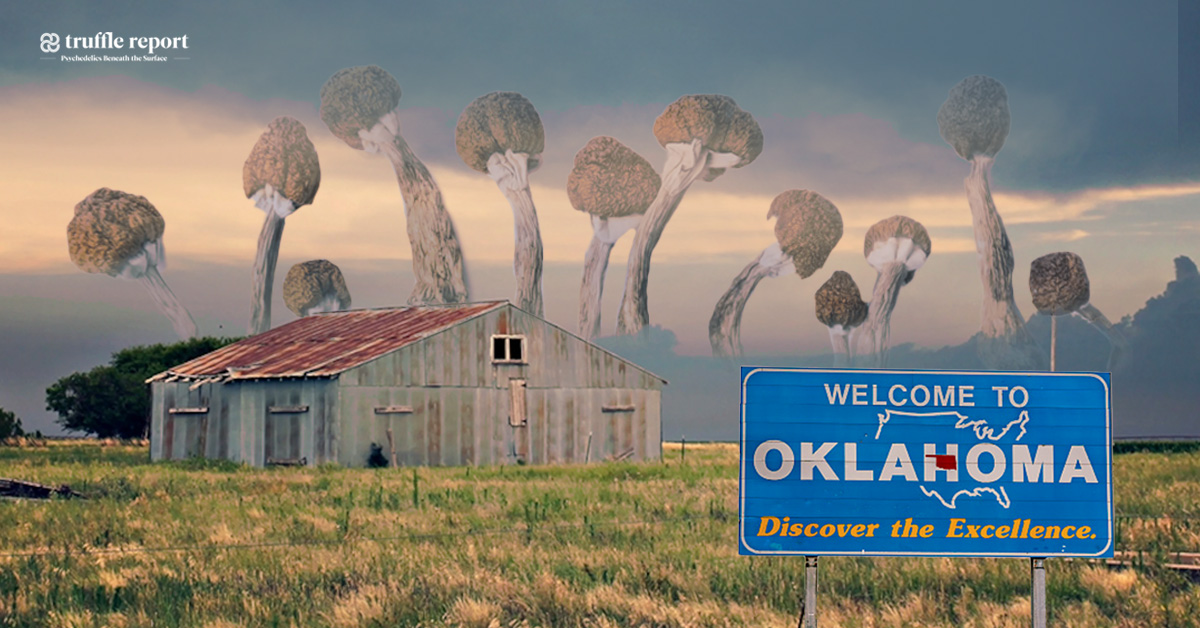 Research into the medical benefits of psilocybin — more commonly referred to as magic mushrooms — in the State of Oklahoma may soon be streamlined with the filing of two new drug policy bills last week.

Bills HB 3174 and HB 3414 were filed in the House by Republican Representatives Logan Phillips and Daniel Pae, respectively, on January 19 and 20.

The two bills offer different pathways to streamline the study of the therapeutic benefits and effects of psilocybin, the primary psychedelic compound found in magic mushrooms, for a range of indications and mental health conditions such as treatment-resistant depression.

However, one key difference between the bills is that Pae’s (HB 3414) would decriminalize the possession of fewer than 1.5 ounces of psilocybin or psilocin-containing plants and fungi. Instead of facing criminal penalties, those found to possess a small amount of these psychedelic drugs would be issued a $400 fine. Possession exceeding 1.5 ounces and unlawful distribution of these substances would remain subject to existing penalties.

Pae’s bill would also authorize universities, other higher educational institutions, and research facilities in Oklahoma to carry out scientific research and medical trials using psilocybin therapies and psilocin (another compound found in psychedelic mushrooms) therapies for the treatment of a range of medical conditions. Per the bill, research would be limited to a list of 10 conditions, including post-traumatic stress disorder, treatment-resistant depression, treatment-resistant anxiety, traumatic brain injury, early-stage dementia, and opioid use disorder.

To facilitate this research, the bill would allow researchers to apply to the State Department of Health for a license to grow extract, synthesize, and process psilocybin or psilocin.

Like Pae’s bill, this proposal also restricts patient participation in these trials to a select cohort of potential subjects, specifically “any person 18 years or older who is a veteran of the United States Armed Forces or the Oklahoma National Guard who suffers from major depressive disorder, severe depression, or any other form of depression or anxiety that is not adequately treated by traditional medical therapies” (for example, treatment-resistant depression).

This bill also outlines strict rules regarding the source of psilocybin to be used in clinical trials. It requires the drug to be supplied by an FDA-approved producer, having been manufactured and tested in a facility approved by the FDA or a similar regulatory agency in another country. It also requires that the psilocybin “has been tested on animals to demonstrate preliminary effectiveness and to ensure that it is safe to administer to humans.”

Both bills are now scheduled to have their first reading in the house on February 7, 2022.

This move is just the latest example of state lawmakers filing legislation to decriminalize psychedelics or promote research into the therapeutic potential of these drugs. This month alone, a Missouri lawmaker has proposed decriminalizing the possession of small amounts of psychedelic drugs, a Utah lawmaker has proposed a Mental Illness and Psychotherapy Drugs Task Force which may include psychedelics, and two bills have been filed in Virginia (one in the House of Delegates and one in the Senate) seeking the removal of criminal penalties for the possession of psychedelics.

Psychedelic-assisted therapy is enjoying something of a popular renaissance in the United States and globally, spurred on by research from leading institutions like Johns Hopkins University. From its early clinical phases, research into psychedelic therapies and compounds is projected be worth billions of dollars, and is being backed both by large nonprofits such as the Multidisciplinary Association for Psychedelic Studies (MAPS) and private entities such as COMPASS Pathways.

Experiments with classic psychedelics, including single-dose psilocybin-assisted therapy trials in healthy volunteers, have promising therapeutic effects on conditions such as major depression and substance use disorder. Certain psilocybin trials, along with MDMA-assisted therapy trials, have been awarded breakthrough therapy designation by the FDA.