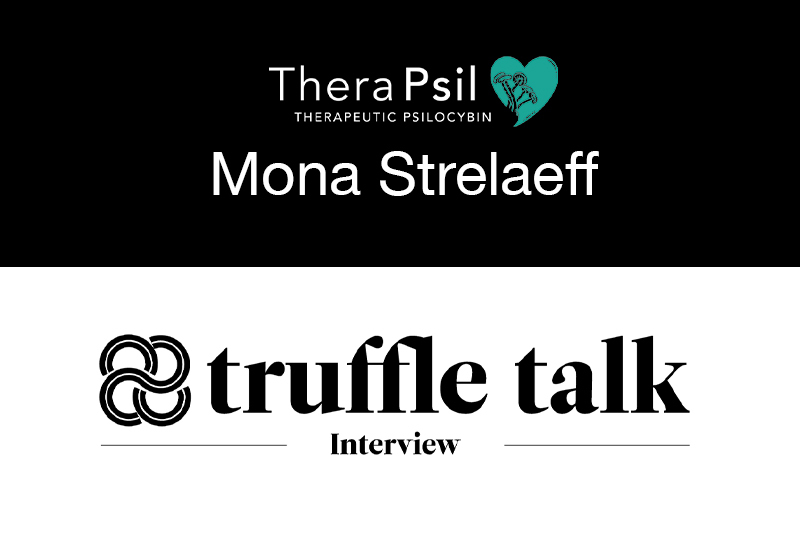 Mona Strelaeff On Psilocybin Therapy: “It Was Time”

While the US was making history by decriminalizing and legalizing psilocybin during the first week of November, on the other side of the border was a woman in British Columbia, undergoing psilocybin-assisted therapy as the first non-terminal patient in Canada. “It was time to go ahead. It was time to make a move,” says Mona Strelaeff, who recently became the first Canadian with non-palliative conditions to get an exemption from Health Canada for psychedelic therapy.

Health Canada has granted legal exemptions to 13 palliative patients since August of this year under Section 56 of the Controlled Drugs and Substances Act. While the first few cases were unprecedented, requiring careful consideration before the exemption, there seems to be a structure being formed within Health Canada, speeding up the exemption process for new applicants.

In a big step for the Health Ministry and psilocybin therapy as a whole, Strelaeff, a 67-year-old woman from Victoria, was allowed an exemption to treat her severe depression on October 4, setting an important precedent for many other people suffering from mental health issues to seek similar treatment.

Strelaeff wrote to me on Facebook during our initial conversation, “I don’t like talking on my cell, my grandkids need to help me with anything to do with anything electronic,” she told me while sharing her landline number over the chat.

Initially cheerful, Strelaeff delved into her vividly emotional experience with psilocybin under the supervision of Dr. Bruce Tobin, founder of Therapsil. She shared with incredible honesty and openness, speaking about her experiences the way one would to a best friend.

Therapsil is a non-profit repository of healthcare professionals, advocates, and patients founded in 2019 with a mission to provide compassionate psilocybin-assisted treatment for mental health issues to Canadians suffering from end-of-life distress. The organization accepts individual cases based on the criteria listed on their website.

Since childhood, Strelaeff had a range of experiences that would shape the severe depression in the later stages of her life. From being a cancer survivor at the age of 48 to bearing personal losses, there were many overwhelming days that she couldn’t figure out how to deal with.

While she underwent a number of therapies and treatments in Canada as well as in the US, Strelaeff was struggling to get to the roots of the problem. “I was a cancer survivor so I was supposed to be happy but started to suffer from depression. I started to get suicidal after a year of my survival,” she says, continuing, “I couldn’t figure out and my kids couldn’t figure out what the hell was going on with me.”  After thousands of dollars spent on treatment over the course of years, nothing was working.

Elaborating on her experience with anti-depression medication and multiple therapies, including time spent at Bridges of Recovery treatment centre, Strelaeff says, “I went from pill to pill. They told me I am bipolar, put me on lithium for a year. Year after that, I got so mentally sick that I was ready to say ‘I’m done’ and can’t live like this anymore.”

Later, Strelaeff learned that she was not bipolar and was taken off lithium. While she continued with powerful medication that caused perpetual headaches, she realized it was a post-traumatic stress disorder (PTSD) that had been afflicting her.

“I have been going to psychologists and psychiatrists and every bloody place on this earth and they didn’t help me,” Strelaeff shared, expressing her discontent with the expensive medication and treatment procedures she went through before the “cost-effective” psychedelic therapy.

Helping to foster Strelaeff’s conviction was her decade-long involvement with MAPS and growing interest in psychedelic research and therapeutic developments. She became determined to seek out the treatment.

From there on, Therapsil helped her put together her application for Section 56 under CDSA, while making sure that Health Canada was aware that she is not terminally ill. “They [Health Canada] were quite quick in responding. I also sent a couple of letters to clarify that they understood that I am not palliative,” she tells Truffle Report.

“I Feel Compassion, and Empathy Towards the Child”

It was November 5, 2020, when Strelaeff was treated with psilocybin therapy. She felt like a new person after the experience.

Following the therapy, she finally figured out that the roots of her trauma went deeper than her adult experiences. Through the process, Strelaeff was able to address some long-repressed childhood experiences that were still quite alive in her subconscious. “I feel compassion and empathy towards the child,” Strelaeff says, breaking down in tears while recounting her story.

Her psychedelic journey included lucid visions, exploring not only the darker sides of her life but also being able to meet her spiritual side. “I could see a temple, and on top of the temple were praying hands that were cupped together,” she reminisced.

Reliving the therapy, she says, “I am getting angry because I want to see inside those hands and I am swearing ‘open the effin’ hands’ and I am not scared of jack shit of opening hands.”

Symbolic of her desire for freedom from her fears, she could see inside those hands in her altered state of mind. Back in her own body, she shares, “I was soaked with sweat.”

Though the experience was intense, Strelaeff expresses, “There was such peace and comfort that I was able to let go of my trauma and I was at peace.” Stirred by her psychedelic journey. She tells Truffle, “I have to tell you everything. That’s the weight I carried otherwise it would not be real for you.”

On the other end of the call, I could feel the weight of her emotions, and her newfound compassion for herself. I could hear a steadiness in her voice, now free to talk about her experiences without feeling guilty about her emotions.

Strelaeff is now a strong supporter of psychedelic-assisted therapy, voicing her belief in more widespread medical access. “I am so strongly into the belief that these medicines should be free for everybody to use with the beautiful people who are willing to guide us. This shouldn’t be illegal. That is just not right,” she says, expressing her dismay.

“It shouldn’t just be allowed for terminally ill patients. Why should I have to be dying? Is that the way it should work? That’s wrong. I feel that’s wrong,” she says, hoping that laws would soon change and that psychedelics will be a mainstream solution for others like her.