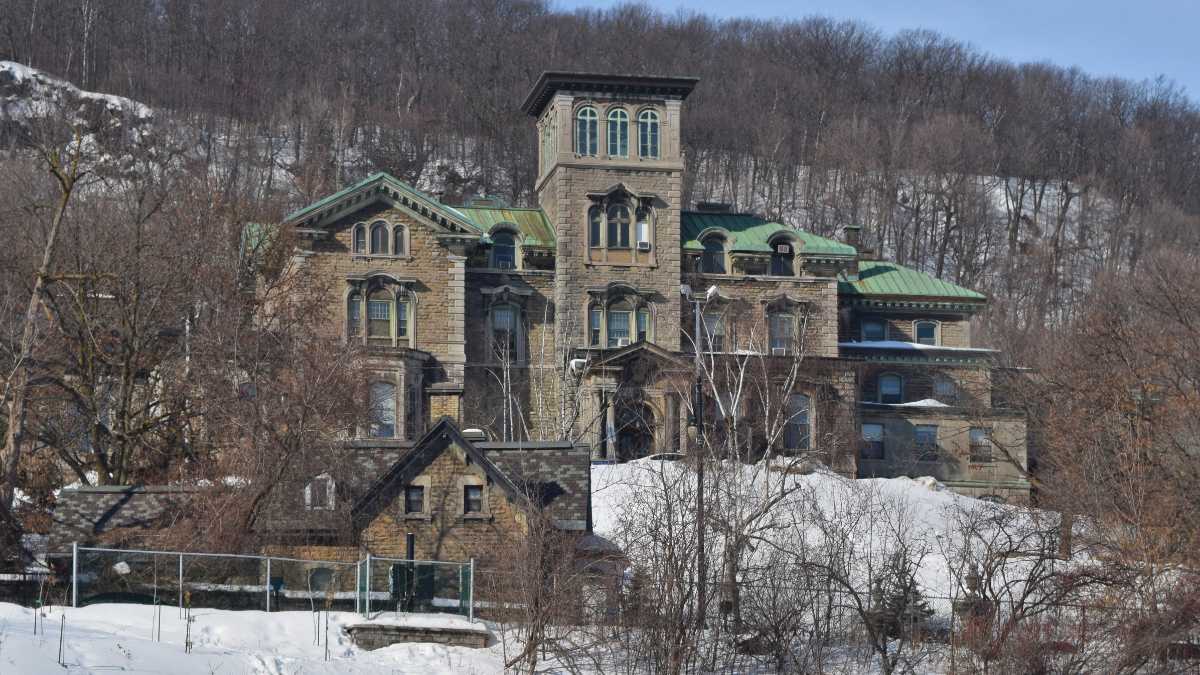 MKUltra: The Dark History of Psychedelics at McGill University

Last month, survivors of the now infamous Montreal experiments held a rally outside of McGill University’s Allan Memorial Institute. Inside that building in the 1950s and ’60s, what some describe as “psychological torture” took place, including the use of electroshock therapy, sensory deprivation, long bouts of drug-induced sleep, and massive doses of LSD. The goal, in part, and as a piece of the U.S. Central Intelligence Agency’s top-secret Project MKUltra, was brainwashing and mind control.

With signs reading “families ripped apart” and “lives destroyed,” the demonstrators rallied for justice, an apology, and compensation for the abuse they faced, Global News reports. The complex perched on the slope of Mont Royal is now part of the Royal Victoria Hospital and the McGill University Health Centre, but the virulent legacy of what took place at the institute has come to represent a dark chapter in the history of psychedelics.

The Roots of the Montreal Experiments

The man behind the Montreal experiments — which ran from 1957 to 1964 — was Dr. Donald Ewen Cameron, a “well-known figure in Canadian psychiatric circles” at the time, according to Erika Dyck, the Canada Research Chair in the history of medicine at the University of Saskatchewan. Originally from Scotland, Cameron was the psychiatrist-in-chief at Albany Hospital in New York before heading McGill’s psychiatry department, and directing the Allan Memorial Institute, according to his obituary in the British Journal of Medicine. Cameron was also president of the and Canadian Psychiatric Association and the World Psychiatric Association.

Cameron “thought about psychiatric illnesses as some kind of malformed brain,” says Dyck. On the biological side of the equation, Cameron traced the roots of mental illness to a dysfunctional or unbalanced brain, something that could be fixed via a lobotomy or electroshock therapy. Taking a more Freudian approach, Cameron also tied mental illness to traumas in childhood that continuously shape the ways people act — behaviours that could be changed with force.

These approaches to mental illness led Cameron to pioneer two intertwined procedures, “depatterning” and “psychic driving,” which he tested on unwitting patients at the institute without consent, often causing devastating long-term effects.

First, Cameron attempted to erase patients’ minds in an attempt to “repattern the brain, … to try to take one back to an infantile state, or to reboot the brain,” says Dyck. Cameron used electroshock therapy (sometimes with jolts 75 times stronger than the usual intensity at the time), extreme sensory deprivation (one woman was kept in a box for 35 days), large doses of LSD (one woman recalled receiving 14 doses of LSD throughout one year), and long periods of drug-induced sleep that could span 65 consecutive days. Then, using “psychic driving,” Cameron attempted to implant permanent behavioural changes in patients using looped audio messages, played for 16 hours daily over a number of weeks.

While recent reports have revealed that the Canadian government gave Cameron more than half a million dollars in funding — equal to $4 million today — between 1950 and 1965, the CIA also commissioned him for at least $60,000 to work under its infamous Project MKUltra. The goal of MKUltra, sometimes just called the CIA mind control program, was to develop mind-control techniques in response to the alleged brainwashing of U.S. POWs in the Korean War. The project’s scope was broad, including 80 institutions, over half of which were colleges or universities, along with hospitals, prisons and pharmaceutical companies.

Sidney Gottlieb, who headed MKUltra, saw LSD as a strong candidate for use in brainwashing and psychological torture, but the broader program also reportedly tested MDMA, mescaline, and psilocybin as well. The CIA took interest in Cameron’s “depatterning” and “psychic driving” techniques and began funnelling him money through a front organization called the Society for the Investigation of Human Ecology, becoming MKUltra Subproject 68.

The Montreal experiments, and MKUltra as a whole, played a role in the publication of the July 1963 CIA’s Kubark Counterintelligence Interrogation Handbook, which detailed torture techniques to prospective operatives. The lasting legacy of Cameron’s contribution to MKUltra was the designing of “a scientifically based system for extracting information from ‘resistant sources,’ ” Naomi Klein writes in The Shock Doctrine. “In other words, torture.” In an article published in the New England Journal of Public Policy, American historian Alfred McCoy writes that “stripped of its bizarre excesses, Dr. Cameron’s experiments … laid the scientific foundation for the CIA’s two-stage psychological torture method.”

Patients at the hospital under Cameron’s supervision reported a laundry list of long-term harms and impairments from the Montreal experiments. A follow-up study conducted by the Allan Memorial Institute in 1967, the year Cameron died, found 60 percent of the 79 patients who reached “stage three” of depatterning still experienced persistent amnesia, while 23 percent reported serious physical complications.

“I didn’t even know who I was half the time,” Lana Ponting, who was only 16 when she was part of the Montreal experiments, told CBC News earlier this year. “It was almost like a jail. It was horrible.” Survivor Nancy Layton, who was admitted to the institute at 18 to be treated for depression, expressed similar sentiments in a letter reported by CTV News in 2018. “They destroyed many parts of me,” wrote Layton. “I’m lucky to be alive.”

Family members of survivors have also recounted the detrimental impacts the Montreal experiments had on patients at the Allan Memorial Institute. “It tainted our whole family,” Alison Steel, whose mother was admitted to the institute in 1957 at 33 after losing her first child and showing signs of depression, told The Guardian in 2018. “They strip you of your soul.”

The Montreal experiments ended in 1964, with Cameron dying three years later. MKUltra was shut down in 1973 as the Watergate scandal sent shockwaves through both the U.S. government and the public, leading CIA Director Richard Helms to order that all the project files be destroyed. But the next year, the New York Times published a damning report outlining how the CIA had experimented on American citizens and conducted other illegal activities in the 1960s.

That front-page story led to the striking of the Church Committee and the Rockefeller Commission, both of which confirmed in final reports that the CIA had experimented on U.S. citizens. The full extent of Project MKUltra wasn’t exposed until 1977 when a request under the Freedom of Information Act revealed a trove of 20,000 documents that had evaded destruction. Others are still fighting for the release of more documents that could be tied to MKUltra.

The demonstrators who gathered outside the Allan Memorial Institute in September are part of a long line of survivors of the Montreal experiments, as well as their families, demanding reparations for the long-term damage Cameron’s experiments caused.

In 1981, Velma Orlikow, a former patient of Cameron’s who was admitted for postpartum depression in 1957 and subjected to his brainwashing regime, successfully sued the Allan Memorial Institute. Orlikow, the wife of a Manitoba member of Parliament, received $41,000 plus court costs. Orlikow wasn’t finished there: She also led a lawsuit against the CIA for its role in the Montreal experiments, making headlines around the world and eventually winning compensation in 1988, before dying in 1990.

Four years later in 1992, Brian Mulroney’s Liberal government agreed to pay 77 of the patients who were part of the Montreal experiments $100,000 each. At the same time, the government rejected more than 250 survivors because “they weren’t tortured enough, applied too late or because they couldn’t produce medical records,” CBC News reported. Other out-of-courts-settlements have also been reached since then. Seventy years later, neither the Canadian government, McGill and the Allan Memorial Institute, or the CIA have issued apologies for the atrocities that took place under Cameron.

Legacies of a Dark Chapter in Psychedelics

The September rally outside of the Allan Memorial Institute makes clear that survivors aren’t done fighting for justice yet. A class-action lawsuit, launched by the Consumer Law Group, was filed in Quebec’s Superior Court in 2018. The suit names the Royal Victoria Hospital, McGill University Health Centre, and both the Canadian and American attorneys general as defendants and is open to “all person who underwent depatterning treatment” at the institute between 1948 and 1964 “and their successors, assigns, family members, and dependants or any other group to be determined by the Court.”

Dyck says Cameron’s Montreal experiments are often told as “a foreboding tale” that symbolizes how the “history of psychedelics continues to haunt the psychedelic renaissance.”

Increased transparency and more stringent ethical requirements for studies involving human participants mean any project resembling the Montreal experiments is, thankfully, very unlikely to ever take place again. At the same time, while psychedelic research rides a wave of resurgence across Canada and around the world, confronting and learning from the history of psychedelic science — even its darkest, most vile parts — is increasingly important.