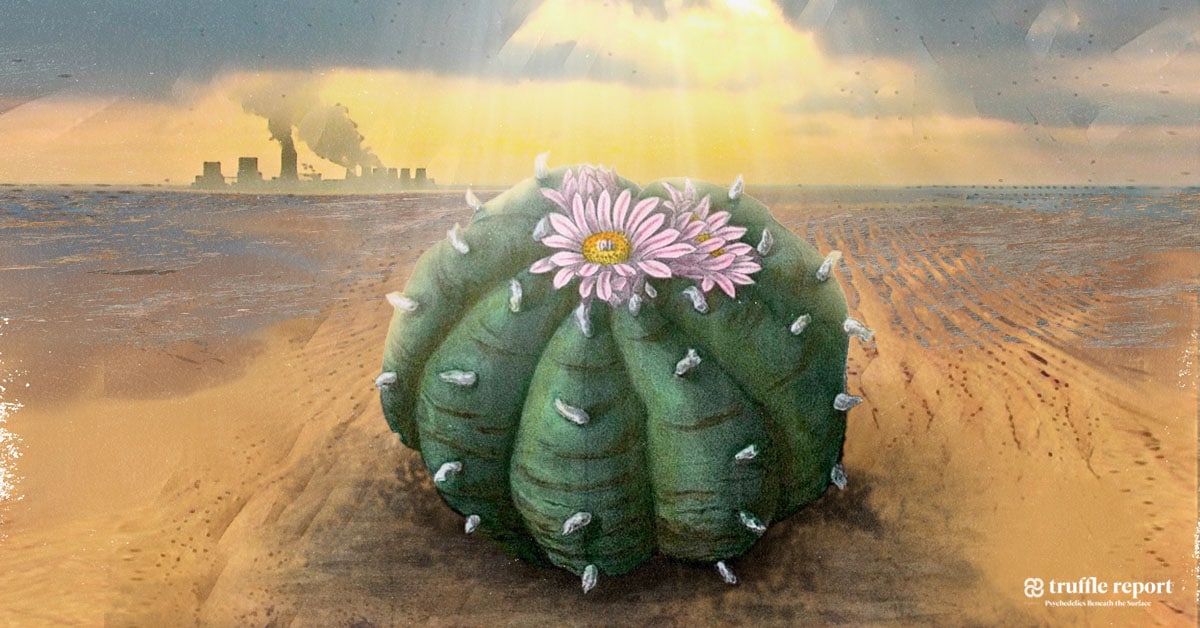 It is not uncommon to hear of people travelling to Mexico to take part in psychedelic ceremonies, either recreationally or as part of a healing retreat. Mescaline, the natural active hallucinogenic found in peyote and other cacti such as San Pedro, is said to trigger a deeply profound psychedelic experience that many find life-changing. While this sounds great, it is important to always remember that peyote, and other naturally occurring psychedelics, are part of an important and ancestral tradition that was indigenous to the Americas long before the arrival of the Europeans.

When it comes to peyote in particular, the Wixárika or Huichol people are the experts. They’ve been using this plant for religious and medicinal purposes for centuries. However, due to unethical exploitation, the Huicholes are now forced to fight mining companies in order to protect their access to peyote, as well as their own land.

The Wixárika or Huichol: History and Peyote Tradition

To understand the real significance of peyote, it is important to understand who the Wixárika or Huichol people are. The Huicholes are a group of people who are indigenous to Mexico and the United States. They live in the Sierra Madre Occidental range in the States of Nayarit, Jalisco, Zacatecas, and Durango, as well as in the States of California, Arizona, New Mexico, and Texas. Though they are known as Huichol, they refer to themselves as Wixáritari (“the people”) in Wixárika, their native language.

According to the Huicholes, they originated in the state of San Luis Potosí in Mexico. Every year, some Huichol travel back to San Luis to perform Peyote (Hikuri, in Wixarika) ceremonies. This tribe has lived in the deep mountains of central Mexico for at least 15,000 years according to carbon dating of the ashes from their sacred fireplaces. It is also important to note that they live quite isolated from the rest of Mexican society and have managed to preserve many of their ancestral traditions.

An important part of these ancestral traditions is religion, in which ceremonial peyote use plays a key role. The four main deities in their religion are the trinity of Corn, Blue Deer and Peyote, and the Eagle, all of whom are descended from their Sun God, “Tao Jreeku.” To the Huichol, peyote is not only an important element of their ceremonies but a deity in its own right.

The Significance of Peyote

Like many indigenous American groups, Huicholes have traditionally used psychedelics, most importantly peyote, for centuries in their religious rituals. Unlike other Native American groups, their rituals seem to have remained mostly unaffected by modernism and reflect pre-colonial practices very accurately.

These rituals involve singing, chanting, weeping, and contacting ancestral spirits. They believe in having a deep connection to the earth and their ancestors. Their art is also closely related to these rituals, with most of it depicting the visions and messages that they’ve experienced and received from their deities during these rituals.

Probably the most significant ritual of all is their yearly pilgrimage to Wirikuta, in San Luis Potosí, during which they collect and consume the ancestral peyote. The intention of this 500 km journey is described as a “desire to return to where life originated” and heal themselves. After arriving in Wirikuta, the Huicholes hunt for peyote. The first cactus found is shared by everyone. After that, they harvest enough peyote for the rest of the year. Before returning home, the Huicholes consume enough peyote to have visions in a healing ceremony. The Huicholes believe that eating peyote allows their shaman to speak to their gods and therefore ensure the regeneration of the Huicholes’ souls.

The Impact of Mining

Unfortunately, while most of the Huichol traditions have remained relatively unchanged by the modern world, their environment and surroundings have not. Mining, in particular, has had a significant negative impact on the Huichol people and it is endangering peyote. In 2011, a sacred mountain known as Cerro Quemado that is important to the ceremonial migration, peyote hunt, and other rituals, was sold for silver mining to First Majestic Silver, a Vancouver-based Canadian mining company. The purchase happened even though the United Nations Education, Scientific and Cultural Organization (UNESCO) claimed the site as a protected area due to its cultural and ecological importance in the early 2000s.

Open-pit mining and cyanide lixiviation (leaching) using two kilograms of sodium cyanide (NaCN) per tonne of ore are two of the company’s mining procedures. These mining procedures can be very damaging, and open-pit mining can destroy entire ecosystems and landscapes. A very small amount of sodium cyanide can kill.  Currently, the Huicholes are still trying to find groups and advocates to help them in the conservation of their land and culture. They are also appealing to the Mexican government to honour an agreement to protect holy sites.

What Is Being Done to Protect Peyote?

The Mexican government protects peyote for religious and ceremonial uses only. Recreational use or non-ceremonial possession is punishable by over ten years in prison. This being said, sometimes it can be hard to determine the intention behind peyote harvesting. Of course, when it comes to the Huicholes, it is understood that harvesting is part of a tradition, but opportunists and plant poachers can take advantage of the plant’s status. For example, in 2018 it was reported that drug traffickers were dressing up as Huichol priests in order to mobilize peyote around Mexico without being detained. Protecting and decriminalizing peyote for ceremonial purposes is a step in the right direction by the Mexican government, but it might not be enough.

According to the Huicholes, it is getting harder for them to find the sacred plant due to illegal poaching, as well as deforestation, which can be caused by mining. There is a need for intervention from the Mexican government to protect sections of their trails not just for peyote itself, but for their yearly pilgrimage. It is important to have in mind that peyote is so crucial and important to this ancestral culture that without the plant, the whole culture disappears. It is also important to remember that while mining is endangering peyote, recreational use and poaching are also big issues that are contributing to the declining peyote populations.