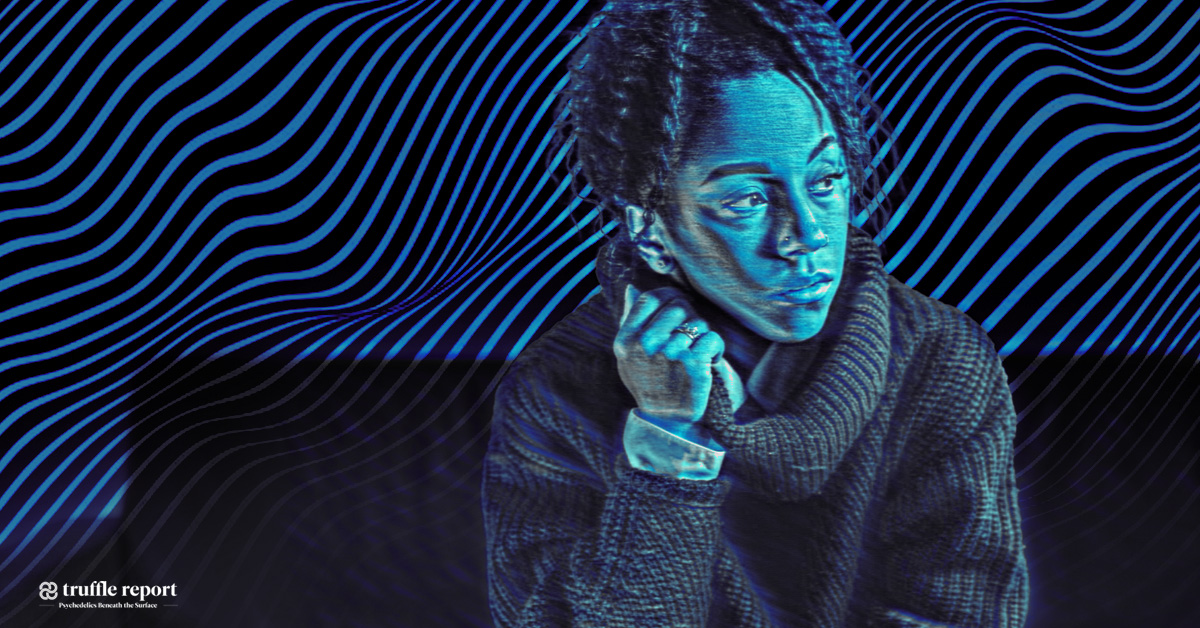 While most new mothers experience joy and excitement when bringing a new life to the world, some may feel sadness or fear in the first days after childbirth. The pressure of not being able to connect with the child and the fear of not meeting social expectations attached to motherhood can strain a new mom’s ability to care for herself and her baby. While 80 percent of new moms experience “baby blues” after childbirth, a completely normal and short-lived reaction, about 15 percent of new moms experience more severe and longer term mood swings, anxiety, and depression. Truffle Report examines whether or not psychedelics, specifically psilocybin microdosing, could provide a solution for those suffering from postpartum depression.

Postpartum depression is a mood disorder that usually begins within the first days to months after delivering a baby, or experiencing a miscarriage or stillbirth, and which can last for months. According to a 2019 study from Mathematica, untreated maternal mental health conditions cost the U.S. $14.2 billion a year.

We don’t yet know the exact reason why some new mothers develop postpartum depression and others don’t. It is believed to be a combination of emotional, physical, genetic, and social factors. Levels of estrogen and progesterone increase during pregnancy but drop significantly after delivery. Researchers believe that this sudden change in hormone levels may lead to depression.

Symptoms of PPD can include:

Postpartum depression is largely under-diagnosed and under-treated, with screening for it being inconsistent and stigmatized by medical and mental health professionals. According to Katherine Stone, an advocate for women with PPD, and the creator and editor of the award-winning site Postpartum Progress, “some studies show that only 15 percent of moms with PPD ever get professional help.”

According to a 2018 study published in Women’s Health Issues of women who gave birth in 2014 and were diagnosed with depression in the following year, 29 percent of those who held private insurance and 46 percent of those on Medicaid did not receive any treatment.

Symptoms of PPD are treated differently, depending on how severe they are. Treatment options include anti-anxiety antidepressants, psychotherapy, self-care, and emotional support groups.

It was only in March of 2019 that the U.S. Food and Drug Administration (FDA) approved the first-ever medication geared towards women suffering postpartum depression. The efficacy of Zulresso (brexanolone) injections was demonstrated in two clinical studies. In both placebo-controlled studies, Zulresso improved depressive symptoms by the end of the first infusion, and also at the end of the 30-day follow-up period compared to the placebo group.

“Postpartum depression is a serious condition that, when severe, can be life-threatening. Women may experience thoughts about harming themselves or harming their child. Postpartum depression can also interfere with the maternal-infant bond. This approval marks the first time a drug has been specifically approved to treat postpartum depression, providing an important new treatment option”, said Tiffany Farchione, M.D., acting director of the Division of Psychiatry Products in the FDA’s Center for Drug Evaluation and Research.

The drug infusion costs around $7,450 a vial, which results in $34,000 per patient without insurance. It is also required to stay in a certified healthcare facility for over 60 hours (2.5 days), which is not included in the drug’s price tag.

However, for many mothers suffering postpartum, traditional treatments are not an option.

Melissa Lavasani, the Executive Director and co-founder of Plant Medicine Coalition (PMC), was suffering postpartum depression and turned to psilocybin as the last resort.

“I was so miserable and in a terrible place mentally that I have never quite experienced something like that before, and I was desperate for a solution. I was doing everything under the sun, and it wasn’t working,” she told Truffle Report.

After listening to a podcast about the potential benefits of psilocybin mushrooms, Lavasani started microdosing.

“Depression had made me feel very detached from my body and a bit disassociated from what was going on around me, like I was just going through the motions. Microdosing mushrooms made me feel very present in my body. There were no hallucinations or other symptoms you might associate with a psychedelic experience. I compare the feeling to getting eight hours of sleep, having a good workout and drinking the perfect amount of coffee. I just felt sharp and ready for my day,” wrote Lavasani.

In a 2019 article published by VICE, Julie Ugleholdt, author of the “Project Baby—My First Year As a Less Than Perfect Mother”, said that microdosing with psilocybin helped her mental health.

“My husband was the one who dosed them for me and mixed them in with my coffee, because at this point, I wasn’t really capable of doing much myself. I definitely noticed a change when I started drinking them — that I started to feel warm and happy inside. That very first day, I sang songs for my daughter. We played together and she smiled at me. I was overjoyed that I was even able to take the experience in,” she said.

Therapist and writer Sarah Stuteville says in an opinion piece written in the South Seattle Emerald on her experience with postpartum that she felt better within weeks of starting microdosing with psilocybin.

“My sense of perspective, and humor, were returning. I felt I could see more clearly the things that sent me spiraling. And when the spiraling happened, I had faith that it would pass. It wasn’t as though my feelings were changing — I was still sad and scared sometimes — it was more like my relationship to those feelings was changing. I could even have compassion for them, and by extension, myself,” wrote Stuteville.

According to an Insider article, mothers who microdose psilocybin became “more patient and present parents” and better able to cope with pregnancy and postpartum mental health issues.

One of the mothers questioned, Natalie, said microdosing psilocybin saved her life after her postpartum depression.

“I had a lot of rage where I wanted to hurt my baby. Sometimes she wouldn’t stop crying, and I just had so much anger inside of me that I was afraid for her, which caused me to want to kill myself because I was afraid that I was going to hurt my kid,” she said.

In September 2021, Field Trip Health announced that the lead indications for FT-104, its novel psychedelic compound currently in development, will be Treatment Resistant Depression (TRD) and Postpartum Depression (PPD).

Joseph del Moral, Field Trip’s CEO, said, “The decision to pursue TRD and PPD in parallel is the result of a comprehensive strategic assessment of FT-104’s unique and desirable characteristics. TRD represents a tremendous market opportunity for which we believe FT-104 will rapidly become a preferred treatment option, especially relative to psilocybin. Notably, PPD is an acute condition with a lower regulatory burden and shorter overall timelines for approval making FT-104 a potential first-in-class for PPD. By pursuing TRD and PPD in parallel, we can achieve both speed and scale for FT-104.”

Mental health, especially for new parents, isn’t discussed enough. Given that psychedelics are showing efficacy in treating depression, anxiety and other mental health conditions, it is important to keep researching their potential benefits for parents experiencing postpartum depression.