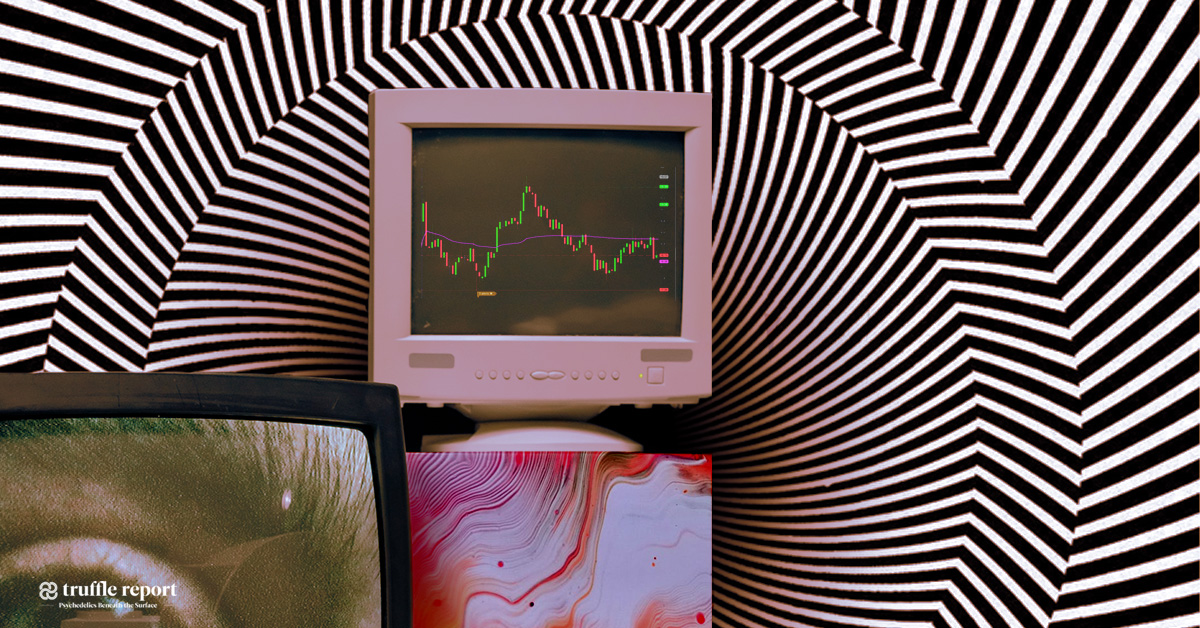 Microdose held the latest iteration of its Psychedelic Capital event series this Tuesday, hosted by Microdose CEO Patrick Moher and Richard Skaife, Co-Founding Partner of the Conscious Fund. The pair kicked off this month’s PsyCap by reminding visitors of the upcoming Microdose Wonderland Conference in Miami on November 8-9, and with a brief recap of sector news highlights.

While the month of August is generally slower, Skaife reminded attendees that the industry had seen a milestone in Cybin Inc’s uplisting to the NYSE on August 5. He went on to congratulate Beckley PsyTech on their successful funding round held this past month as well.

Truffle Report attended the Big Boards panel, featuring Cybin CEO Doug Drysdale and Field Trip Health CEO Ronan Levy. Both companies have seen strong market performances since listing, and have been primary drivers of interest and investment in the field. Moderating the discussion was Yeji Jesse Lee, a journalist at Insider covering developments in the psychedelic and cannabis business arenas as they attract increasing investor attention.

During the introductions, Levy remarked that he and Drysdale had been on “enough panels that we could pretty much do each others’ presentations by rote these days.”

Lee kicked things off by asking what each would tell potential investors who know relatively little about psychedelics but are interested in investing in the space.

“It’s a great space to invest in,” began Drysdale, “given how disruptive we think these treatments are going to be in the mental health space. For new investors, do your homework. There are an awful lot of companies that have started in the last couple of years. It’s hard to keep track of them all. Really do your homework on drug development. It’s a lengthy process, it’s complicated. It certainly varies quite significantly between different major markets, talking about North America or Europe. Given the amount of capital that’s needed, I would back teams that have a track record in drug development companies that are well-capitalized given how expensive drug development is, and given the ups and downs of the capital markets and that this sector is being pretty volatile. I’d focus on businesses that have a strong IP strategy and this is an emerging IP space. Given the amount of investment needed, IP is important. Finally focus on companies that at the end of the day, have differentiated offerings so that when the market eventually forms here for these treatments, those treatments can be competitive.”

Levy added that, “I think Doug hit all the high-level points, but I’d just like to add that while this is very much a drug development story, and it’s a nuanced story in that we’re looking at psychedelic-assisted therapy. It’s going to look a little bit different. What’s really interesting about psychedelics is we live in a paradigm where I won’t see the placebo effect, but the expectations around the experience actually have an effect on the therapeutic outcome. People who have a good intention who do the work and go into a setting for their secondary experience seem to have better therapeutic outcomes. Now, what makes this interesting is unlike most drugs where generally we don’t talk about brands or anything along those lines. The expectation of the experience, the doctor, and the therapist administering it are actually going to affect the therapeutic outcomes, at least based on the evidence we have today. Investors should be aware of that.”

What to Look For

Moving on, Lee asked both panellists what they would consider to be potential red flags for investors new to psychedelics, given how crowded the space has already become.

Drysdale was first to respond, saying “I don’t know if I want to get that specific, but I will say that we’re already starting to see some segmentation. Companies like Field Trip and Cybin and a small number of others have made it across to U.S. boards that are well-capitalized and have balance sheets that are considerably larger than the many other companies. Some of those companies will get funding and continue and others will not. Others will not be able to get the capital that they need. It just won’t be enough to go around. I don’t see that necessarily is a bad thing. I see that as a bit of a selection process, selecting out good technology and good IP, and for Cybin I see that as an opportunity. I think we’ll see a fair amount of consolidation over the next couple of years with smaller companies rolling up into larger platforms and having a broader offering overall as a result.”

Levy agreed, saying that “I don’t want to talk negatively about anyone. I would say again, focus on at least at this stage with the companies who have a clearly articulated IP strategy that differentiates them. If it’s another psilocybin company going after yet another indication, what makes them more likely to succeed with a generic psilocybin product? You can start to hear the same stories over and over again. The classic psychedelics like LSD, MDMA, or psilocybin will be generic products made by generic drug manufacturers. Look for those things that make it different. The delivery platforms, the new molecules, all that stuff. Those are the companies that will be positioned to succeed. And even if you have a good product you also need a good management team who’s savvy with operations and prudent with capital and can actually get through it. These are the high-level things that I believe people should be cognizant of.”

Next, Lee asked both CEOs about the experience of listing on major exchanges, the NYSE and Nasdaq for Cybin and Field Trip respectively. “How long did it take, and what do you think the reason is that you’ve managed to get on these exchanges while so many other psychedelics have not?”

“The listing process is never an easy one,” Drysdale responded. “We have a relatively small finance and legal team that we’re working on the listing for a few months as well as a fundraising, as well as the shelf prospectus, as well as year end financials. So it was a very busy time for us, but important. As I said before, drug development is so expensive and it takes a long time, so getting access to a broader investor base and better liquidity is beneficial to the long term health of the company and the balance sheet. We picked the New York Stock Exchange in part because some of our partners are there. Catalent and Co., and Vance that we work with, are both there. J&J, the first psychedelic company, is also on the New York Stock Exchange, so it’s a little bit of kudos. That said, the NYSE and the Nasdaq both really provide the same access to investors on that one broad base. I will say that the team at the NYSE was phenomenal. Overall the process was very smooth.”

Levy added that “I’d have to say that our legal and finance team are probably suffering from post listing stress disorder because it works quite hard to get through it. Listing on the Nasdaq was actually quite expeditious for us. If you’re listed on the Toronto Stock Exchange, the TSX has a reciprocal agreement with the Nasdaq, where the Nasdaq relies on all the work the TSX has done in terms of vetting the company. Getting on the TSX was a heavy lift for us. There’s a lot of education involved. Our model is nuanced because we are treating patients with ketamine assisted therapy and now psilocybin-assisted therapy in the Netherlands, so we had to go through a fairly intense review in terms of our protocols, compliance, medical insurance and all that. But at the end of the day, it’s good, these are the things that matter, that you don’t have players who are half-assing it in terms of people’s capital as well as people’s health.”