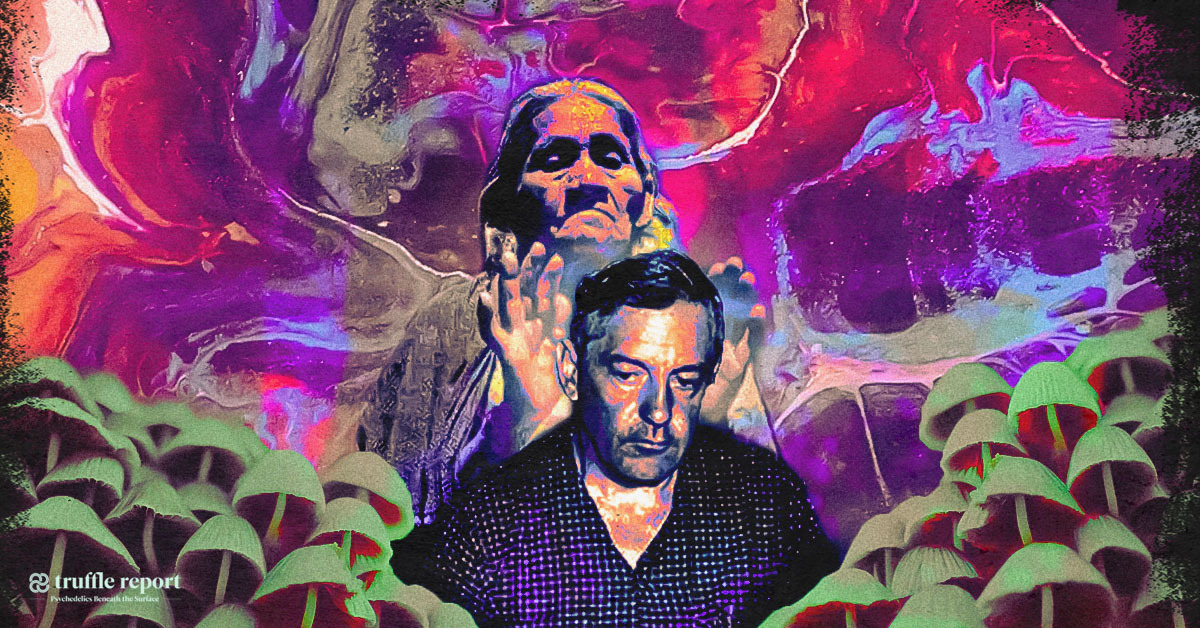 The Troubled Rediscovery of Psilocybin Mushrooms

The story of Maria Sabina and R. Gordon Wasson is a powerful reminder of an important and often overlooked formative chapter in the saga of hallucinogenic mushrooms’ role in our culture.

The 60s counterculture history of psychedelics has the effect of functioning as an eclipse to the casual observer. The impact of LSD, psilocybin mushrooms, and mescaline on Western culture created a flurry of philosophy, music, art, and political backlash that tends to obscure, at least at the beginning of any educational journey, the wider truth of how the same psychedelic substances came to exist in our modern cultural history.

The “discovery” of what Wasson was the first to dub “magic mushrooms” was coupled with a strange sort of innocence and a sense of novelty. It was, after all, on the cover of Life Magazine, one of America’s most popular and family-friendly magazines, that this story broke in June of 1957. It was a new field of inquiry, a curiosity, with nothing sinister lurking in that first magazine article.

The cultural baggage of psychedelics would only grow heavier from this point, innocuously nestled as this first foray was amidst ads for cigarettes and shaving cream. For Sabina, the results of this interaction both personally and for her community were tragic, and provide those involved in the modern psychedelic space a vivid lesson in the law of unintended consequences.

Born in 1894 and raised in Oaxaca, Maria Sabina Magdalena Garcia appears to have lived a fairly typical Mexican village life. Of Mazatec campesino descent, and with a family history of practicing the shamanistic velada mushroom ritual in and around the town of Huautla de Jimenez, Sabina was also a devout catholic, meshing and adapting Christianity to indigenous Mexican spirituality.

It’s a common theme and a frequent response to the suppression of psychedelic substances, including mushroom ceremonies, among colonized peoples of Latin America, which began with Spanish conquistadors and extending down through the centuries.

Sabina’s life did not stay quiet. While initially obscuring the location of the rite, and granting Sabina the alias of “Eva Mendez”, Wasson eventually let slip the truth. Vision seekers, hippies, and apocryphally a few rock stars found their way to Huautla de Jimenez, all looking for a dose of mushrooms. Sabina, whether through a generosity of spirit or a sense of duty, did not always charge for her services in administering the mushrooms. Her fame did not endear her to the rest of the town. In the coming years, she would have her religious practice raided by Mexican authorities, her home burned down, and her son murdered, eventually dying destitute in 1985.

While it’s impossible to say how many such instances might have remained unchronicled over the centuries, Maria Sabina and R. Gordon Wasson represented the first documented instance of outsiders being invited to participate in the Mazatec mushroom velada. Wasson chose to attach a great deal of weight to this, adding in the introduction of his Life article “Richardson and I were the first white men in recorded history to eat the divine mushrooms.” There would be many more to come.

Mycology, along with the study of ethnobotany, was not Robert Gordon Wasson’s chosen field. He’d been an author and English Professor at Columbia before moving on to become Vice-President of Public Relations at J.P. Morgan. To judge by his resume, he was the proverbial square, a successful straight-edged man of his time. What led him and his photographer to become the first documented recipients of psilocybin was a genuine, if naïve, scientific curiosity, coupled with a little blatant deception.

Wasson’s interest in mycology was first piqued by his Russian wife, Valentina P. Wasson. While on their honeymoon in the Catskills, she drew his attention to various kinds of wild mushrooms she recognized, bringing some home to eat. The two realized a distinct difference in their upbringing and attitudes towards mushrooms, which led to a comparative study of “mycophile” vs “mycophobe” cultures. Despite criticisms that can be leveled at Wasson for his carelessness in dealing with Maria Sabina and the Mazatec community, the couple’s researches would end up finding extensive hard and anecdotal evidence of the importance of psychedelic mushrooms throughout civilizations the world over.

His enthusiasm aside, Wasson as an anthropologist and amateur mushroom enthusiast was equal parts bumbling and unscrupulous. In his determination to pursue his research, he ended up accepting money, perhaps unwittingly, from an MKUltra shell corporation. He also informed Maria Sabina that he desired the visions of the mushrooms out of concern for his son, an outright lie told to gain the trust of a practitioner devoted to physical and spiritual healing. Maria Sabina and R. Gordon Wasson are, sadly, par for the course as anthropological research practice and reportage standards in those days.

Scientists, Tourists, and Federales: The Aftermath of Maria Sabina and R. Gordon Wasson

While expressing some contrition , Wasson defended his publication of the story in Life. He claimed subsequent visits, and the revealing of details surround Maria Sabina as justified in the pursuit of scientific knowledge. Such is often the cry of those who let genies from bottles. After a second trip, with an entourage that included French Mycologist Roger Heim, samples of the mushrooms were sent to Swiss Chemist and LSD inventor Albert Hofmann. The renowned chemist was able to isolate the chemical structure of psilocin and psilocybin before travelling to Huaulta de Jimenez to present Maria Sabina with the divine plant in synthetic pill form. Evidently, she was pleased with them, thanking Hoffman for enabling her to practice her healing regardless of seasonal mushroom availability.

From there, the visitors would become more frequent and less distinguished, unless one believes the stories of Bob Dylan and Mick Jagger coming to call. The story of Maria Sabina and R. Gordon Wasson in Life kicked off a wave of psychedelic tourism that would forever disrupt Huaulta de Jimenez. Formerly off the beaten path, the town was finding itself a destination for beatniks and hippies, to the chagrin of locals who resented the change. Nude, tripping gringos became a frequent sight in the streets. Mexican police federal authorities arrived, concerned even before the official criminalization of psilocybin about the sale of drugs to foreigners. The blame was laid squarely at Maria Sabina’s door by her neighbours, as she continued to accept these tourists for the velada, despite her own misgivings, saying “I realized the young people with long hair didn’t need me to eat the little things. Kids ate them anywhere and anytime, and they didn’t respect our customs.”

News of the mind-altering mushrooms proliferated, bringing, among others, a young and curious Timothy Leary , whose poolside psilocybin experience in Mexico would prove socially cataclysmic. One wonders what might have happened had he sought out someone like Sabina to guide him through an experience with psychoactive plants and fungi, rather than being left solely to his own mental and spiritual devices.

Lessons for the Future of Psychedelics

Wasson gained the public eye, at least for a time, as well as a research career, going on to publish or self-publish a number of volumes in the field of mycology, as well as on ethnobotany.

For all her efforts, Sabina died an impoverished outcast, held in no small part responsible for the ruination of her people’s traditional way of life. The cruel irony is that she is now held up as a sort of sacred figure, almost a Madonna of the psychedelic movement among practitioners. Her face graces mugs, t-shirts, and assorted tchotchkes sold to the tourists passing through her hometown, and the site of her former home is now a public museum

She stuck to her ancient craft as a curandera, but wound up regretting that she’d ever let the secrets of her people’s tradition escape into the wider world, even for spiritual purposes. “Before Wasson, nobody took the mushrooms only to find God. They were always taken for the sick to get well.”   T

Therapeutic and spiritual psychedelic use are experiencing something of a renaissance, though with a decidedly more commercial bent than was present in these early interactions. It would be naïve of us to think that we have discovered all the world has to offer in terms of naturally occurring psychedelic and therapeutic substances, or that we’ve plumbed the full depths of indigenous cultural practices concerning the ones we are aware of. As we move forward, we should try remember that posterity has tended to be unkind to those who have brought these substances to the wider world. Whether for the sake of profit, science, or spirituality, the results have rarely aligned with the intentions.