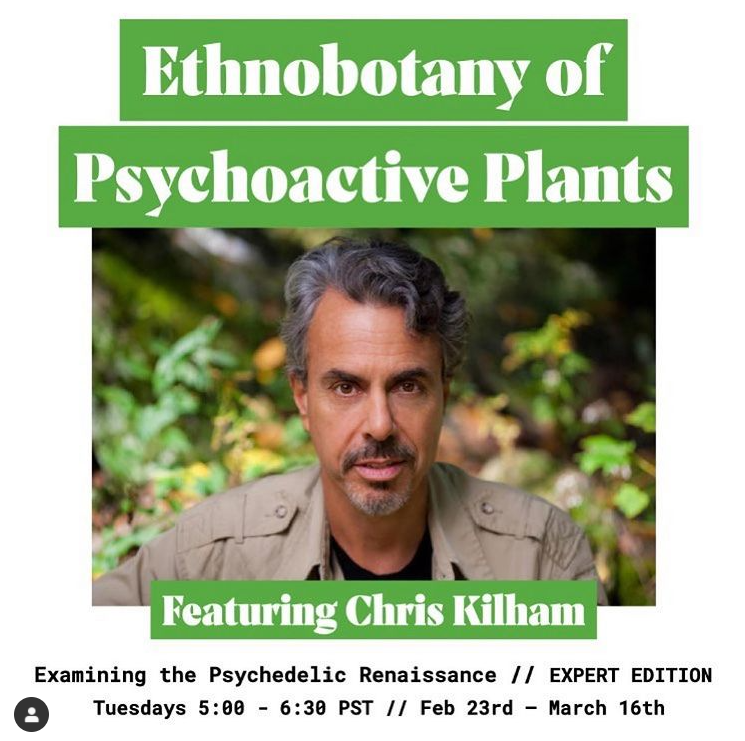 The Multidisciplinary Association for Psychedelic Studies (MAPS) Canada is launching a four-episode mini web series on February 23 to explore the ‘relationship between people and psychoactive plants’ that ‘dates back to antiquity.’

The series, The Ethnobotany of Psychoactive Plants with Chris Kilham will be an expert edition hosted by Chris Kilham, also known as Medicine Hunter. “I am very happy to be doing this four-part series with MAPS. I think they’re doing wonderful things for the psychedelic community,” Kilham says. Kilham has spent over 25 years investigating the use of medicinal plants among indigenous peoples globally.

Each episode will be dedicated to individual psychoactive plant medicine, with its history and benefits presented live by Kilham, followed by an interactive Q&A session. The hour-long episodes will be aired live every Tuesday between February 23 and March 16.

“I have selected four psychoactive plants to talk about,” Kilham says. “With each different section of this four-part series, [we will] give people a real sense of ethnobotany of the plants, the people and the culture. I am doing that with ayahuasca, cannabis, coca leaf and kava,” he adds.

With decades of experience at hand, Kilham told Truffle that his presentation would widely consist of rare images of plants that he encountered during his investigations in different countries. One such episode would cover a recent expedition to the Amazonian rainforests, talking about Ayahuasca sustainability.

“The idea is to ground out the types of offerings that MAPS Canada presents within the spheres of psychoactive plants and fungi,” Kilhim says, emphasizing the vision of educating people about the benefits of psychedelic plants.

This series is the first ‘Expert Edition’ among the other ongoing webinar series by the organization. MAPS Canada held two seasons of a similar webinar series, Examining the Psychedelic Renaissance in 2020. While MAPS is at the forefront of developing an MDMA-assisted therapy model, now in its third phase of clinical trials, these webinars are a way of addressing the stigma surrounding entheogenic plants and other psychedelic compounds.

“MAPS wants to get good information out into general society about psychedelics and psychoactive plants,” Kilham says. While most of the emphasis is on the clinical application of psychedelics, he says, “MAPS also have a real respect for the origins and culture and I happen to fit that, more than anything else.”

There is no ticket or fee for the webinar series, however, registration is required on the MAPS Canada page, or here.